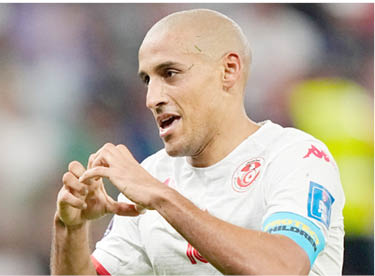 French-born Wahbi Khazri scored the only goal of the game as Tunisia claimed a famous 1-0 win over holders France at the World Cup on Wednesday, but it was not enough for them to reach the last 16.

France coach Didier Deschamps, whose team were already through to the knockouts, made nine changes but they were a shadow of their usual selves and Khazri punished them in the 58th minute at Education City Stadium.

Tunisia then had to hold on for the victory as an Antoine Griezmann goal in stoppage time was disallowed following a VAR review.

There is a large Tunisian community in France who will savour the result, the country’s first win against European opposition at a World Cup and just their third ever in 18 matches at the tournament.

The world champions and Australia finished level on six points, but France top the section on goal difference.

France will meet Poland in the Round of 16.

Meanwhile, Lionel Messi’s Argentina beat Poland 2-0 in their final World Cup Group C match at Stadium 974 in Doha to advance to the knockout stage where they will face Australia.

Argentina topped the standings on six points while Poland were awaiting the outcome of the other group game between Saudi Arabia and Mexico to see if they would come second and also qualify despite the loss.

Midfielder Alexis MacAllister put Argentina ahead straight after the break with a low first-time shot after a flowing passing move, while Julian Alvarez shot past Poland goalkeeper Wojciech Szczesny in the 67th minute to make it 2-0.

Poland eventually qualified for the Round of 16 on goal difference after Mexico conceded a last minute goal in their 2-1 win over Saudi Arabia.

Quickfire second-half strikes from Henry Martin and Luis Chavez had put Mexico on course to reach the knockout stages and Uriel Antuna also put the ball in the net but the effort was disallowed for offside.

Saudi Arabia pulled a goal back in stoppage time through Salem Al-Dawsari to wreck the Mexicans’ dream of reaching the last 16.