It was a gathering of who is who in the country’s political arena as former Senate presidents, incumbent and former governors, ministers, the leadership of… 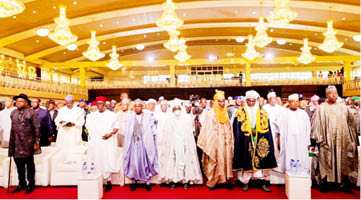 It was a gathering of who is who in the country’s political arena as former Senate presidents, incumbent and former governors, ministers, the leadership of the National Assembly, traditional rulers and captain of industries gathered in Abuja yesterday to honour the late frontline politician and Senate Majority Leader in the Second Republic, Dr Abubakar Olusola Saraki.

True to his standing as a veteran politician of his time the dignitaries cut across all the political parties especially the two main parties – the All Progressives Congress (APC) and the Peoples Democratic Party (PDP).

Speakers filed out one after the other to speak about the man whose influence still rings bell even ten years after his demise.

Even though the accomplished politician and philanthropist died on the November 14, 2012, he had lived a life that even 10 years after his death, he is still been celebrated across the country.

The Late Dr. Saraki was born on May 17, 1933 to the family of Alhaji Mutairu Saraki, a wealthy textile merchant with big business concerns in Lagos and Abidjan, and his wife, Alhaja Humuani Ayinke Saraki from Iseyin who were elite by all standards at that time.

During his political career, spanning decades, the late Saraki was one of the personalities that formed the National Party of Nigeria (NPN) which became the ruling party in the Second Republic.

He was one of the presidential aspirants who fought for the party’s ticket in Lagos and came fourth behind the eventual winner, Alhaji Shehu Shagari, Alhaji Yusuf Maitama Sule and Mallam Adamu Ciroma.

As the Second Republic government was formed, Saraki became the first Senate leader in the new presidential system that the Constituent Assembly in which he was a member recommended.

During the Ibrahim Babangida transition programme, Dr. Saraki was a presidential aspirant on the platform of the Social Democratic Party (SDP). He formed the Congress for National Convention (CNC) when the late General Sani Abacha initiated the return to civil rule.

In 1998, he became a national leader and member of the Board of Trustees (BoT) of the All People’s Party (APP) contributing to the party’s success in Kwara and Kogi states. Late Saraki assisted many individuals across the country to realise their political aspirations. Most of the people who became governors under the APP platform in 1999 were said to have benefitted from his financial support.

In his speech, the former Senate President Bukola Saraki said the family and associates of his father believe that it is good that as part of the celebration of his life and times they should create a national platform to address one of the issues that he was passionate about as a way of re-awakening national consciousness and seeking to achieve improvement in the national Interest.

He said: “We know that in his lifetime, any matter that concerned any of Oloye’s numerous followers usually touched him so personally, passionately and genuinely. His followers were his life. They formed the core of his politics and well-being.  He believed they should have a say in his political decisions and he never took any action without consulting them. He never took their loyalty for granted. He believed in the physical, intellectual, spiritual, and material development of his followers. He believed a leader is as good as his followers.

“It is for these reasons that he spent a huge chunk of his resources to give scholarship awards to the children of many of his supporters and helped some of the followers to set up their businesses. We have chosen the Leadership and Followership Debate as a way of revisiting Oloye’s belief in having a vibrant, enlightened, discerning, loyal, informed, and involved followership who can hold the leadership accountable, responsible and responsive as well as take decisions that can guide and guard the leaders.”

The former senate president said after the lecture “many who knew our father will relive the experiences of the type of person he was, the ideals he represented, and the philosophies that he cared so deeply about. Also, those who never met him will have a good picture of his life and times as well as the goals and aspirations that he lived for.”

In his lecture, Professor Patrick Lumumba, a former Director of the Kenyan Anti-corruption Commission, charged Nigerian and African leaders to emulate the late Saraki.

“We have come here to have a little Saraki in us. So that Saraki his good qualities, Saraki the philanthropist, Saraki the business can leave a little in us, so that when we go home, so that when in the month of February, Nigeria will be electing its leaders. It may be said that there was a Saraki and that good men and women rose and good men and women came out to vote and the best man did win.”

President Muhammadu Buhari, represented by the Governor of Borno State, Professor Umar Zulum disclosed that the late Saraki was one of the politicians that earned the respect of many Nigerians.

“We appreciate his contributions to our polity. I want to use this opportunity to ask my fellow politicians to take away lesson from the lecture that has been delivered with a view to moving Nigeria forward,” he said.

In his speech the Sultan of Sokoto, Alhaji Muhammadu Sa’ad Abubakar III said he knew the late Saraki many years ago as a young officer, in the Nigerian Army serving in Kwara State.

He also commended the choice of the lecturer, adding that his style of speaking truth to power is what politicians need at this time to entrench good governance.

Others are two former Senate presidents; Anyim Pius Anyim and Iyorchia Ayu, who is also the National Chairman of the PDP. The Speaker of the House of Representatives, Femi Gbajabiamila, former governors; Ibrahim Idris (Kogi), Boni Haruna (Adamawa) and Attahiru Bafarawa (Sokoto) were also in attendance.