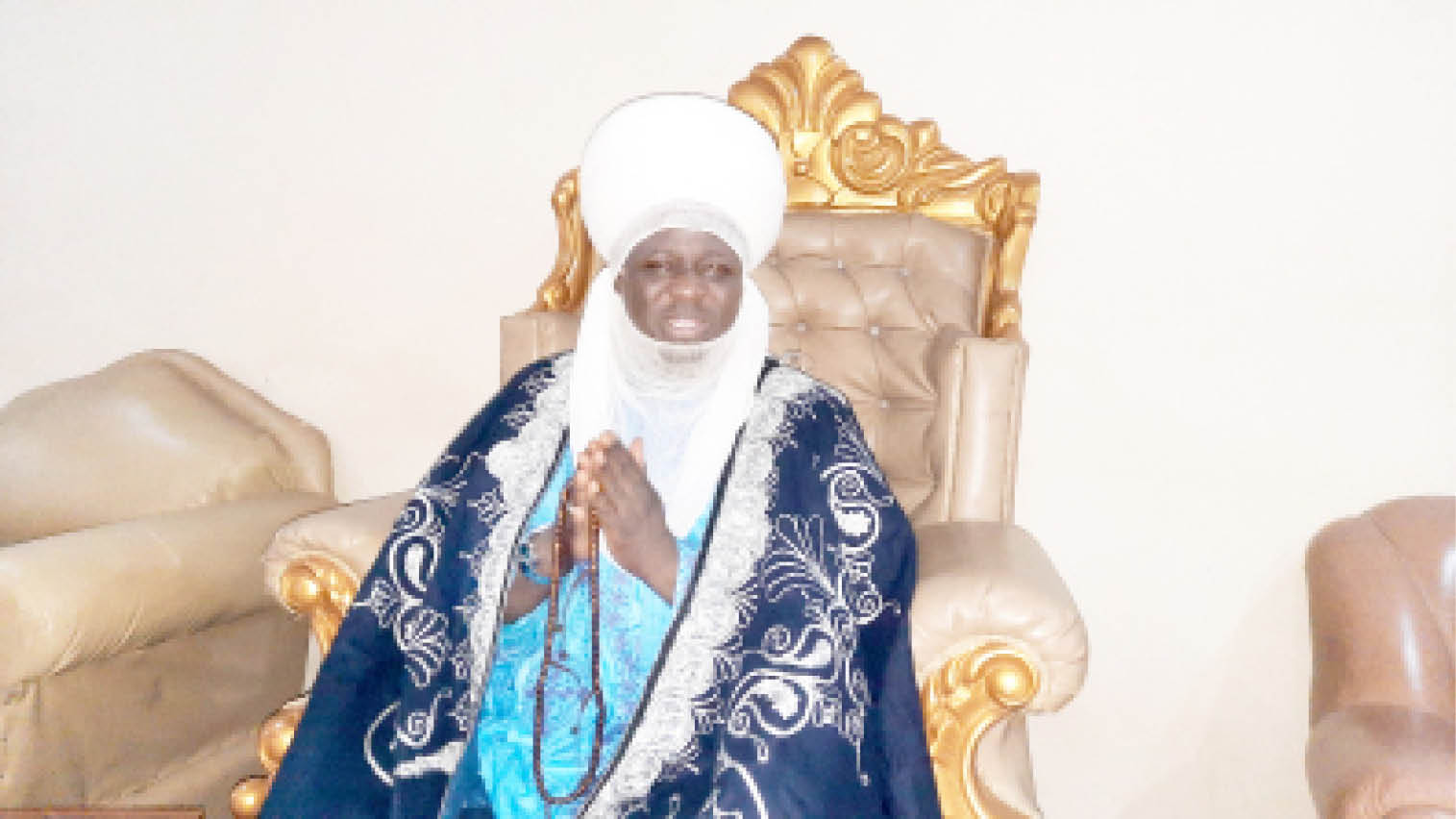 Alhaji Mu’azu Muhammad Kwairanga is the Emir of Funakaye, an Emirate with headquarters in Bajoga town, Funakaye Local Government Area of Gombe State. Mu’azu Kwairanga is a descendant of late Modibbo Bubayero, the founder of Gombe Emirate. Born on April 20, 1979 to late Muhammad Kwairaga Abubakar, the first Emir of Funakaye, Mu’azu was recently appointed as the third Emir of Funakaye on June 2, 2021, after the demise of his elder brother, late Abubakar Muhammad Kwairanga. In this interview with Daily Trust on Sunday, he talks about how traditional rulers can play a role in tackling the current security crisis in the country, his plans for the emirate and other issues. Excerpt:

How did you feel when your name was announced as the new Emir of Funakaye?

I felt very happy and thanked Almighty Allah profusely for giving me the opportunity to ascend the throne of my forefathers.

It was not by my doing; it was destined by Allah who chose me to be the new emir of this important and historic emirate.

Although I am heir to the throne and contested alongside several deserving princes, who are all equally qualified to be appointed as emir, but Allah in His mercy bestowed the throne on me and Governor Muhammadu Inuwa Yahaya selected me from among the three shortlisted candidates.

Therefore, I will forever be grateful to Almighty Allah for this great honour and full of appreciation to Governor Yahaya for making it possible for me to fulfill the ambition of every prince.

Have you ever dreamt of succeeding your father?

This is the wish of every prince, to inherit the throne. Therefore, I silently prayed to become emir. However, I never showed it or discussed it with anyone because it is only by Allah’s wish that one can become an emir, so in the event I didn’t get the throne, I won’t feel disappointed because it is Allah that bestows power to whoever He so wishes.

What is your relationship with other princes that contested for the throne with you?

As I said earlier, I contested for the throne alongside several deserving princes of the ruling house. But, only three of us were selected and had our names forwarded to the governor, and I was lucky to be picked by Governor Yahaya as the next emir.

Immediately my name was announced as the new emir, I called others that contested for the throne and asked them to join me in developing the emirate preserve its integrity, and make it prosper.

What role can traditional rulers play in tackling the insecurity bedeviling the country?

This is a very serious issue that is giving us sleepless nights as traditional rulers. The lingering security crisis is a serious matter that we have been working with the districts and village heads under my domain to see how we can support the government in providing lasting solution to the problem.

For instance, I recently had a meeting with the district, villages and ward heads under the Funakaye Emirate Council. We directed them to be vigilant in their respective domains and look out for any new face that comes to their area and report suspicious faces or persons to the appropriate authorities.

We shouldn’t allow people to  settle in our community indiscriminately without proper background checks. We should find out where they are from and what brought them to a particular community because allowing people to enter any town or villages without checks was what brought us to the current situation we have found ourselves in.

We are surrounded by a large grazing reserve from Wawa, Tilde to Ribadu, and we’ve informed our people to always report any incident to us for onward transmission to the appropriate authority.

Above all, we are always in prayers for Allah to keep us safe from such calamities.

What is your take on creating a specific role for the traditional rulers in the constitution?

Traditional rulers have played a very critical role in the past in the area of maintaining peace and security in the country. But in recent years, we were left behind, which culminated in the current situation we have found ourselves in.

When traditional leaders were responsible for securing their domains, whenever a crime is committed in a particular area, a district or village heads under whose territory such incident happened, will launch a search party to go into nooks and crannies of that particular area until such person is found and apprehended.

Therefore, creating a specific role for the traditional rulers in the constitution will tremendously help to reduce the lingering issue of insecurity bedevilling the country because as traditional rulers, we live closer and among our people and occupying a non-tenured appointment gives us the liberty to know almost each and every household in our locality.

As such, a constitutional backing will give us opportunity to mobilise our hunters and vigilante groups, which were hitherto under the emirs and chiefs, to be patrolling the forests and other areas of our territories to protect the people.

And I believe the constitutional recognition will give us that power and Insha Allah in no distant time, things will change for good for the benefit of our people and the country. I am confident that each and every traditional ruler that is saddled with that responsibility will do his best to protect his people.

What is your plan for the Funakaye Emirate?

My first target as an emir is to ensure the unity of the entire people of Funakaye LGA, because the strength of any leader is in his ability to unite his people.

I will also collaborate with my district and village heads and other traditional rulers within my jurisdictions to ensure improved and sustainable security of lives and properties in the communities and the state at large.

Within just 100 days on the throne, I was able to secure job opportunities for 14 indigenes of Funakaye emirate at various private companies and commercial banks.

In respect to my target of improving access to western education in Funakaye LGA, I have paid tuition fees of over 100 students studying at different tertiary institutions in the country.

I am also planning on instituting a scholarship programme for the best performing secondary school students proceeding to tertiary institutions.

I also donated fund to some five selected schools across the Funakaye LGA for the purchase of assorted instructional materials to improve teaching and effective learning environment for student.

In the area of poverty alleviation, I have assisted not less than 500 needy individuals from various communities in the emirate with funds to purchase food products in order to relieve the biting economic hardship being experienced in the country.

I also assisted and gave financial donations to various religious organisations across 10 wards of the LGA, this include renovations of mosques, and provision of carpets and praying mats.

Your area is lagging behind in girl-child education. Do you have a plan regarding this?

I have plans in the area of girl-child education, because we are backward in that area. I am planning to introduce scholarship scheme purposely for that because some girls want to continue their education beyond secondary school but their parents are too poor that they cannot afford to sponsor their education, and they may end up being married off early.

We are lacking female professionals in several fields like environmental, engineering, especially the medical profession That is why our people are finding it difficult to send their wives to seek medical attention in hospitals, because most of the doctors are males.

Where do we see the Funakaye emirate in the next decade?

My number one priority is to unite my people to live peacefully without any differences of tribes or the village where a person comes from. With that, the emirate will be prosperous and be known all over the country.

That will be achieved through extending a hand of friendship to other emirates and chiefs across the 19 northern states and even from the southern part of the country. Through that, the emirate will get recognition, a lot of people will know about us and respect the people of Funakaye.

As an emir why do you still attend funeral prayers?

Even before I became an emir, I made it a habit to attend every funeral prayer when I am opportune and also follow the remains to the graveyard for final internment because of the huge rewards involved.

After I became an emir, I still continued with that habit because as a servant of Allah, I still need that reward to enable me enter paradise in the hereafter. In the eyes of Allah, there is no emir, chief or title holder, we are all the same, so I vowed to continue attending funeral prayers and accompany the remains to the graveyard whenever I have the opportunity.