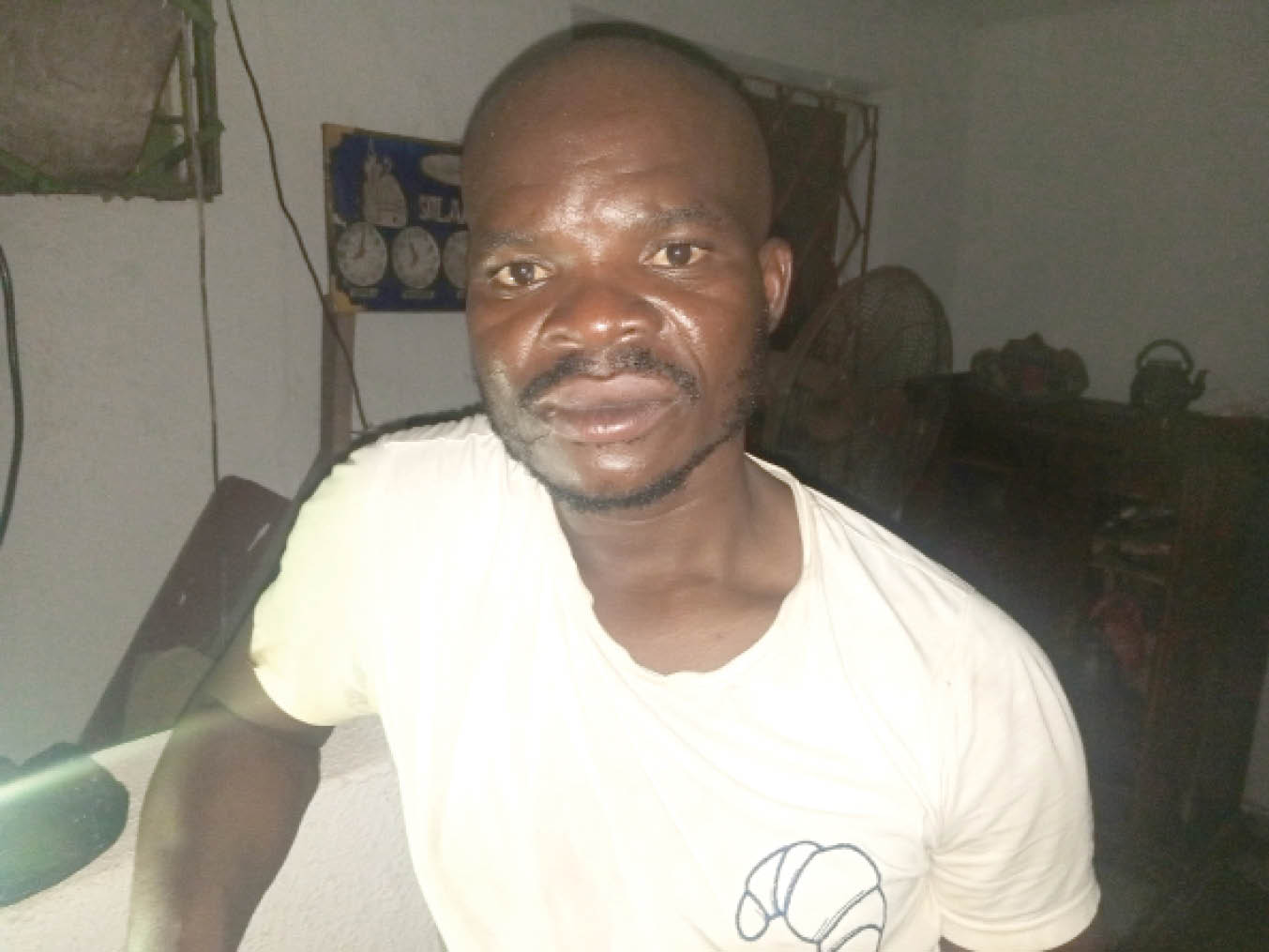 Sunday Remijius, now Abubakar, hails from Udenu Local Government Area of Enugu State. Born into a strong Catholic family, the graduate of Economics education, from the Nasarawa State College of Education who loves cooking, was employed at one of the Shoprite offices in Abuja as a Merchandiser. But his encounter with a colleague led him to Islam. That decision has left him with steel in his leg from one of the several attacks from his family for renouncing his religion. In this interview, he shares his tough journey to Islam, his struggles with his family and his cry for help, among other issues of interest. Excerpts:

How did you become a Muslim?

I accepted Islam through the influence of a colleague while I was working at Shoprite in Apo, Abuja. His name is Ibrahim and his attitude made me to become a Muslim. Shoprite employ people from a state and post them to another state for training. I was posted from Abuja to Kano but I met Ibrahim when he was posted to Abuja from Kano. There were about 23 boys with me then and some cabal used to deduct N2000 each from the salaries of all us unknown to the management. This happened for years. Ibrahim was directly in charge of that ‘deduction project’ when he came but he refused to take the money. When I inquired why, he said his religion does not allow him to touch haram. Coupled with other traits I noticed about him because of his religion, it made me to accept Islam. I reasoned that if his attitude was possible because of his religion, then I want to be part of the religion.

How did your wife receive the news of your conversion?

We were working together at Shoprite then but she was angry when she learnt that I converted. Initially I didn’t want her to know. But one day, she saw me coming out of the mosque we have at the office and was wondering what I went there for. I opened up and told her ‘I’m now a Muslim’. Her name is Helen. She said she can never convert to Islam and called my family who came down to Abuja from Nasarawa State where we lived. This was in 2020. All they thought was that someone converted me. The period coincided with my yearly leave at Shoprite and I took the opportunity to travel to Enugu State with my wife. Meanwhile, because of my conversion, my family left Nasarawa State and relocated home. They said I brought shame to them, especially my father who is a traditional title holder.

How will you describe your experience with your parents as a Muslim?

It was terrible and unimaginable, especially for my father. He finds it hard to believe that I could be a Muslim and want to remain one. But my mother and younger sister, who is the last born in our family, love me so much. After my conversion, if I miss any prayer, I will be very uncomfortable until after I pray and I will happy and very peaceful with myself and everyone around me. I was observing my Maghrib prayer in one instance and reciting Suratul Fatiha aloud when all of a sudden, I felt a terrible blow from behind. When I turned, they were some of my relatives. They hit me with plank, iron and anything they could get. I tried to fight back because I am a very strong person just like Umar in Islam, but they were five of them. They hit me to the extent that I fainted and they wanted to kill me. It was my mother that prevented them by throwing herself on top of me that day. When I regained consciousness, I discovered that I couldn’t stand up anymore and my hands and legs were broken. Initially, I was taken to a local hospital in Enugu where I was bedridden for six months. My hands were okay but my legs became a problem. Anytime I tried to walk, I will feel and hear cracking of bones inside me. I made arrangement to come to Idala Hospital in Kano for specialized treatment on the advice of Ibrahim. It was there that steel was infused into my leg. The treatment cost me my entire savings because I was doing very well at Shoprite with about N200,000 salary when my allowances were added. My office gave me six months but I spend about a year and five weeks without full recovery. It was within this period that I lost my job at Shoprite. I was loved there and the management wanted and was eager to give me back my job, but for my condition.

How much did your operation cost?

About N420,000. I was operated twice. After the first time, my leg became shorter, so I went back and they had to use something to lengthen it a bit. That was when they put the steel in my leg.

During your time of tribulation, did you receive any assistance from the family?

No, except my mother who loves me to a fault. Although she was not happy that I became a Muslim, she offered support when she realized they wanted to take my life.

Did you reach out to the Muslim community in Enugu?

I’m the only Igbo Muslim in my entire local government, apart from those that came for business. There is a mosque where I used to go to pray and the mosque management later involved the police. But my father as a high-ranking personality intimidated the policemen. He said he had to relocate from Nasarawa because of me and here I am again. He told them that I am his first son, and unless I renounce Islam and stop praying, he will never allow me have peace. I told him that I wasn’t the one that chose Islam, rather it was Allah that revealed it to me and he said over his dead body. When we got home, I was told that I’m no longer welcome in the house and on the land which he gave me where I built my house. I have left everything for him. It was the DPO of the station who is also a Muslim that I met where I used to go and observe Jumat that advised me to emulate the Prophet (SAW) and make hijrah by leaving the community. My father warned him not to interfere or it will lead to another crisis. He rejected the intervention of my mother. It was one Hausa man that gave me N50,000, another one gave me N20,000 among other assistance. I had to leave because my wife and her family were also giving me problem. I collected my daughter who is 7 years old now and arranged for her to get to Nasarawa.

How did you come to Ilorin and how have you been surviving?

It was one Hausa man I met in Enugu, who had once sold meat in Ilorin, that advised me to come down to Ilorin maybe because of the relative peace and tolerance here. I was given a place to stay by a good Muslim and one Hausa told me to always come if I want to eat. My place is at the heart of Maraba Motor Park where passengers to Kano, Kaduna and Niger, among other states in the north, board vehicles. I help the drivers to load (for a token) whenever I am not having pain in my leg.

Have you been speaking to your family?

It is only my mother and our last born that still speak to me. There was a time during this fiasco in Enugu that my sister Lovina came to my house and saw me sleeping. My English translated Qur’an which I often read before going to be bed was on the ground and she began to read it. It coincided with the time my father walked in. It was her scream that work me up from the vicious hit from my father.

Since your conversion to Islam, any regrets?

The only regret I have is the persecution from my family. I love my mother so much and my happiest day will be to witness her profession of Islam. That will further inspire many others to follow. But I know most of my family members wouldn’t want that to happen. If I put on jalabiya back there in Enugu, my people will be looking at me as if I don’t know what I am doing. They see my conversation as something abnormal and unusual.

What help do you seek now?

The help I seek is concerning my legs, the metal implant is affecting me. Sometimes I sit down on the ground to pray and hate myself (astaghfirullah). At times, I will cry and pray to Allah to assist me. Sometimes, I wonder if I’m the first person to convert to Islam. Lovina once asked me that if she converts to Islam, will she also pass through the same pain I’m passing through. If I had my way, I would have brought her closer to me. She is a graduate of the Nasarawa State University. I am trying to convince her because I know that In Sha Allah, I will be the source of my family accepting Islam.

How much will the operation cost?

The doctor at Idala said N120,000 and I have tried to raise the money by selling the only phone I have now for N11,000. I don’t have anyone again. I had sold my Mercedes 190 during a stage of the previous operations. I wanted to make arrangement to dispose my remaining motorcycle but learnt my junior ones are using it. I had to forgo the idea because I don’t want anything that would disrupt the happiness of my family.