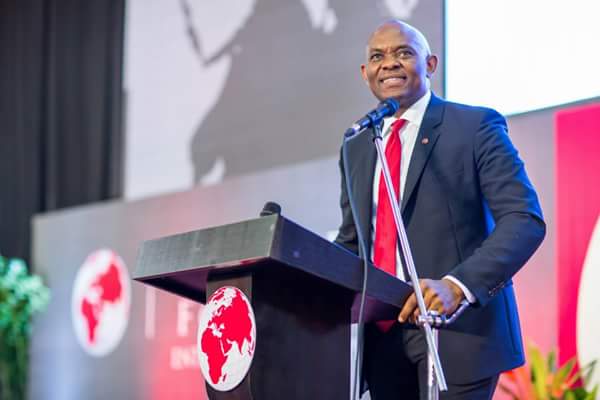 TIME has named Tony O. Elumelu, one of Africa’s leading investors and philanthropists, in the 2020 TIME100, the annual list of the 100 most influential people in the world.

The list, now in its seventeenth year, recognises the activism, innovation, and achievement of the world’s most influential individuals.

Mr Elumelu, who is one of only four Africans on the 2020 list, is recognised for his track record of business turnaround and value creation, and economic empowerment of young Africans.

His tribute was written by the richest man in Africa and the president of Dangote Industries Ltd, Aliko Dangote.

“A mere handshake says a lot about Tony Elumelu.

“His gritty grip underlines his charming, tenacious personality: a man who hardly backs down from any challenge.

“The same engaging qualities have propelled him from a modest beginning in Nigeria to becoming chair of the United Bank of Africa, and one of the most innovative and ambitious business leaders of his generation.

“He is a leading proponent of “Africapitalism,” a belief that Africa’s private sector can and must play a leading role in the continent’s development through long-term investments, as well as entrepreneurship and regional connectivity.

“After deepening the financial market in Africa, he has found an equally important niche: giving a voice of hope to millions of youths across Africa.

“Tony has harnessed Africa’s youth bulge to catalyze development and protect the future, committing to investing $5,000 each in 1,000 young entrepreneurs per year across 54 countries in Africa.

“Having come so far, Tony still forges on, striking a fine balance between personal satisfaction and societal impact,” the richest man in Africa commented about Elumelu.

Tony Elumelu is also the Chairman of pan-African financial services group, the United Bank for Africa (UBA), which operates in 20 countries in Africa, the United Kingdom, France, and is the only African bank with a commercial deposit taking licence in the United States.

He also chairs Nigeria’s largest quoted conglomerate, Transcorp, whose subsidiaries include Transcorp Power, one of the leading generators of electricity in Nigeria and Transcorp Hotels Plc, Nigeria’s foremost hospitality brand.

Mr Elumelu is the most prominent champion of entrepreneurship in Africa.

Since inception, the Foundation has funded just under 10,000 entrepreneurs and created a digital ecosystem of over one million as part of its ten year, US$100m commitment through the TEF Entrepreneurship Programme.

Self-funded, the Foundation is increasingly sharing its unique ability to identify, train, mentor and fund young entrepreneurs across Africa, with institutions such as the UNDP, the ICRC and leading European development agencies.

Heirs Holdings, which serves as a corporate role model for African businesses, and the Tony Elumelu Foundation will both celebrate ten years of impact in November.

Their mission continues to be inspired by Mr Elumelu’s economic philosophy of Africapitalism, which positions the private sector, and most importantly, entrepreneurs, as the catalyst for the social and economic development of the continent.

Meanwhile, President Muhammadu Buhari has lauded Elumelu for this feat.

President Buhari, in a statement issued on Wednesday by his media aide, Femi Adesina, hailed Elumelu’s vision of Africapitalism, which espouses that Africa’s private sector must play a leading role in the continent’s development through long-term investments, entrepreneurship, and regional connectivity.

He added that it was just a matter of time before such efforts caught global attention.

The President said Elumelu’s commitment to the development of African youths, whom he has given a voice and empowerment, investing $5,000 in 1,000 young entrepreneurs per year across 54 countries, pedestaled him as a visionary, with milk of human kindness, “and such, among others, must have qualified him for the Time Hall of Fame.”

Buhari wished Elumelu greater successes on all fronts, and recommends his strides to other high networth people.