Tinubu-Shettima joint ticket and politics of religion in Nigeria

Nigeria is a religiously polarised entity managed by politicians who deploy religion as a tool for political advantage. In a glaringly fragile country like ours,… 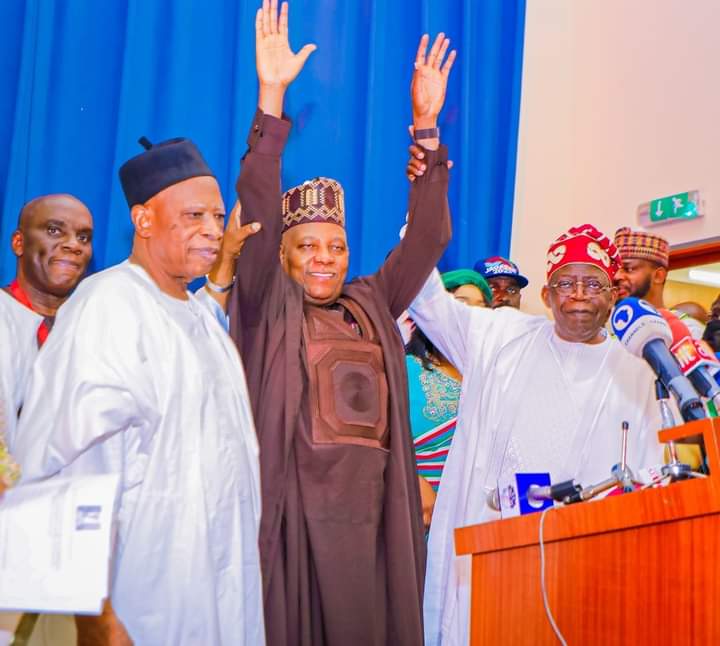 Nigeria is a religiously polarised entity managed by politicians who deploy religion as a tool for political advantage. In a glaringly fragile country like ours, one would expect that every political decision should be underscored by the religious sensibilities of the people, at least for the sake of peace. But instead of politicians to consider this, they go about politics that stands detrimental to the country. This is what the APC Muslim-Muslim ticket suggests.

This is not to pander to the sentiments of some religious bigots whose outcry is rooted in what they stand to benefit from the calculation. It’s rather instructive to note that every political calculation that disregards the need for balance must be challenged. Of course, nations of the world develop without recourse to some silly religious sentiments. We need to be reminded, however, that Nigeria, given its very foundations, has been tied to religion, a consideration, which political players must pay attention to.

I know some might want to remind me of June 12, 1993 presidential election. Others might also talk about the 1979 election involving Azikwe-Audu and Awolowo-Umeadi combinations. This presidential election, even in Nigeria of those innocent years, ended in favour of Shehu Shagari who used Alex Ekweme as his running mate. Nigeria is terribly divided along religious lines, thanks to our putrid politics. What about those who have justified the Tinubu-Shettima ticket on the basis of competence? I have this answer for them.

Nigeria is a generously blessed country. Like we have Muslim technocrats who can do well in politics, so there are intelligent Christian politicians. Yar’adua during his brief time in office used Jonathan while Jonathan partnered with Sambo. These running mates did all they could in the course of serving their principals. If not for a decision made in response to threats posed by influential candidates such as Atiku Abubakar (PDP), Peter Obi (LP) and Rabiu Kwankwanso (NNDP), what else explains the hypocrisy of the APC Muslim-Muslim ticket? This decision, whatever it means to you, would negatively affect the country in the following ways:

There would be ethno-religious tension in the country. There is no denying that ethnicity is inexorably bound to religion here. Our politics is deeply situated in religion and ethnic affiliations. That is people, vote for a party based on how much such attunes to their religious and ethnic sentiments. And any political decision that trivialises these fundamentals might be thrashed away, and the country journeyed into needless rancour.

Plus, the ticket will hamper the chances of the ruling party in 2023. Some have argued that it’s not a threat since most votes come from the north, a region that overwhelming installed Buhari’s administration. Those people need to be told that such a point is stale in the context of reality today. Is this nice for the country in the long run? 2023 isn’t far.

Finally, a Muslim-Muslim ticket in a country beset by systemic killings and other vices purportedly inspired by religious sentiments isn’t a nice idea. If our politics will continue to disregard the fundamental polarity of Nigeria in terms of region and religion, then I am afraid the result won’t be friendly at all. However, all this is a reflection of the political retrogression in Nigeria. We need a new order where people will be convinced by neither region nor religion as the basis to choose who should lead them. I hope we get there soonest.