By Bisi Olawunmi  There  they go, again (apology to former President Ronald Reagan of the United States).  Politicians  are on the grandstand, again, in the… 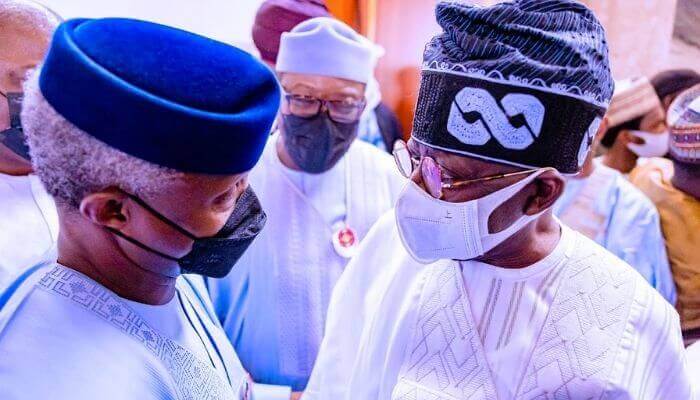 There  they go, again (apology to former President Ronald Reagan of the United States).  Politicians  are on the grandstand, again, in the prelude to the election year 2023. It is the season of declaration of presidential ambition – by  those with hazy prospects and others who are just CLOWNS, with zero prospects!  The clowns are hustlers on an ego trip, to earn the title:  former Presidential Aspirant!!

Ordinarily, these  should be  interesting political times in Nigeria, but for the gloom of insecurity over-hang.  We live in dangerous times.  The nation is  in  the  grim, vice-grip of insecurity while the politicians are prancing and strutting in the public arena in what is patently self-serving ambition, with scant regard for the citizens’ well being.

This brings us to the raging  warfare in the media and on the Internet over the ambitions of two individuals –  Asiwaju Bola Ahmed Tinubu, former Lagos State Governor and APC national leader and  Vice-President, Prof. Yemi Osinbajo,  – each claiming preeminence for the position of President of  Nigeria.  The Internet Warriors – the foot soldiers for the respective aspirants – seem determined to outdo themselves.  The dominant narrative has revolved around the loaded words  –  GODFATHER, LOYALTY and BETRAYAL.  Sadly, the policy thrust of the two aspirants, the reason for their seeking the office of the president – has not been articulated with clarity, lost in the cacophony of mudslinging, so far. Sad, very sad.  How come that a tested, political strategist and tactician  – some even dub him a political magician – and an acclaimed brilliant lawyer and erudite academic  cannot get above the pedestrian level of character assassination as a means of getting political advantage?

There has been contention, back and forth, as to who between Tinubu and Osinbajo has the right of first refusal.  Tinubu says, and Chief Bisi Akande concurs in his memoir “My Participations”, that there was an understanding with President Buhari for Tinubu  to succeed  him, while VP Osinbajo’s protagonists contend that he should be an automatic shoo-in into the office of President. Such right, though,  is not cast in stone in favour of a sitting Vice-President.  In 1988, U.S. President Reagan’s Vice President, George H. W. Bush had to slug it out in the party primaries before he could finally prevail over Senator Bob Dole. Even, as recently as 2016, President Barack Obama’s Vice President, Senator Joe Biden, now U.S. President,  was intimidated by the Clinton political machine from even running in the Democratic party primary. That strategy must have informed  Tinubu to declare early for the presidency. That Vice-President Osinbajo refused to be intimidated  must have similarly been informed by a feeling of entitlement to become the main man in an office for which he had, for seven years,  literally been a political eunuch (apology to former U.S. Vice President, Lyndon B. Johnson – LBJ)

Ranking Senator Lyndon Johnson, as Senate Majority leader, had been in contention for the Democratic  presidential ticket with  Massachusetts junior senator, John Fitzgerald Kennedy (JFK) in the 1960  U.S. general election. When Kennedy won the nomination, Washington Post publisher, Henry Luce, had invited Johnson to dinner in New York at which he broached the subject of Johnson being on the slot as vice president. Johnson had  demurred,  pointing out that as Senate Majority Leader, only the president is superior to him in power. “ All  Vice Presidents are political eunuchs, and I am not, by God, about to let Kennedy cut my balls off,’’  he had vowed.  Only to turn around and accept the position when formally offered.  That is the politician, for you, changing position without blinking an eye! The allure of the VP position, in spite of the humiliation the occupants generally suffer, is the notion that such a person is just one heartbeat to the throne – should the president die in office . Kennedy was assassinated in 1963  and Johnson assumed  the Presidency of the United States.  But ailing President Muhammadu Buhari is not about to succumb to ill health and gift  Vice President Osinbajo the lift up to an unassailable romp into the presidency.

That much of the brick-bat about the presidential ticket of the All Progressives Congress had been between Tinubu and Osinbajo is a testimony of their being joint front runners for the ticket. Minister of Transportation, Rotimi Ameachi’s joining the presidential fray was treated as a yawn – his fitness lap on declaration day  dismissed as the theatrics of an attention-seeking  non-starter.  Of course, there are dark horses waiting in the wings.

The danger to the camps of Tinubu and Osinbajo  is that if their Mutually Assured Destructive (M.A.D) campaign remains unabated, going into the primaries – whichever of the three options is chosen – both would have been mortally  wounded, politically. Even if either of them wins the APC nomination, it will be an uphill task to clinch the presidency in the general election if the Peoples Democratic Party  (PDP) is able to get a saleable presidential candidate.  In the American presidential election of 1964 ( President Johnson vs Senator Goldwater)  the prospects of the Republican candidate, Senator Barry Goldwater, was doomed following the vicious attacks he suffered from his fellow Republican contestants in the party primaries.   ‘’Lyndon Johnson grabbed the big brass ring in November, but it was my fellow Republicans, Nelson Rockefeller, Henry Cabot Lodge, William Scranton, George Romney and other members of the ‘ Stop Goldwater ‘ cabal, who made Lyndon Johnson’s  victory such a runaway. .. The press played a strong role  as  the carrier  of destructive  statements, devastating personal criticism and outright falsehood of my fellow Republicans’’, he lamented in his memoir titled: WITH NO APOLOGIES, a national bestseller in 1979.

There is, however, a window of opportunity still open to the political sluggers  to rein in their bloodhounds, if both Tinubu and Osinbajo can be humble enough to  subordinate their ambitions to the public good by imbibing the  five-point doctrine of civil political contest; ‘’  First of all, it is fine to oppose, but do not hate. Second, keep your sense of humour. Third, always oppose positively. Fourth, learn all the tricks of campaigning; and fifth applaud your opponent if he is right’’,  (WITH NO APOLOGIES, Page 157). Civility in contention is a win-win strategy, whatever the temptation to go for the kill.

The poser is: After a bruising primary, can there be easy reconciliation  between the godfather and a protégé  that has come into his own prominent political reckoning?  But then, politicians, being politicians, can mend fences to safeguard their political interest – the morning after !!!

But if  the no-holds-barred  BATTLE  in the  CLASH OF AMBITIONS between Tinubu and Osinbajo,  with the seeming  political war  cry of No Blinking, No Surrender continuing, it may turn out destiny killers  for both combatants – a head or tail, they lose scenario.