The All Progressives Congress (APC) Presidential Candidate, Sen. Bola Tinubu, on Saturday assured ordinary Nigerians that they would not be forgotten in his administration if… 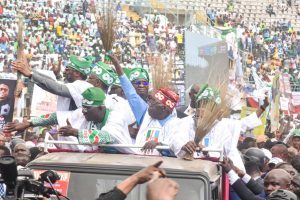 APC Presidential candidate, Bola Tinubu and other APC stalwarts at the rally

The All Progressives Congress (APC) Presidential Candidate, Sen. Bola Tinubu, on Saturday assured ordinary Nigerians that they would not be forgotten in his administration if elected in the 2023 general elections.

Tinubu, who made this remark at the flag–off of the APC Presidential Rally at Teslim Balogun, Surulere, Lagos, said that Nigerians would not be forgotten in education, health, employment opportunities, security and infrastructure.

Tinubu said: “I am indeed grateful to the people of Lagos State. I say thank you from the bottom of my heart. It is a broom revolution.

” We will do our best for Nigeria. It is not going to be easy at the starting point.”

He expressed confidence that the party would not lose any of the progressive governors to other parties, saying,: “we will work together to run this government”.

Tinubu urged the electorate to use their Permanent Voter Cards (PVCs) to defeat the Peoples Democratic Party (PDP)’s Presidential Candidate, Alhaji Atiku Abubakar, describing him as a serial contestant over the years.

Tinubu urged Lagos residents to also re-elect Gov. Babajide Sanwo-Olu and his running mate, Dr Obafemi Hamzat for the progress and stability of the state.

The candidate, who urged his supporters to ensure peaceful conduct and collect their PVCs, said: “God will give you your hearts’ desires.”

In his remarks, Gov. Simon Lalong of Plateau and Director General of the Tinubu/Shettima Presidential Campaign Council, expressed joy at the massive turnout and excitement by party supporters at the rally in the state.

“It is not only human beings that are happy with Asiwaju, I saw fishes jumping for Asiwaju on our way here, and we are anxiously waiting for the victory in 2023.

“Asiwaju stands tall among all the other candidates because he has demonstrated it when he was the governor of Lagos state. He has built several leaders across the length and breadth of the country.

“Since he became the governor of the state, he has maintained the legacy and also built bridges across the state, and that is why wherever you go today, it is very clear that Nigerians have decided to vote for Asiwaju and Shettima in the presidential election,” Lalong said.

According to him, since charity begins at home, the people of Lagos should not reject their own son because he is the only candidate that can serve the country with all his heart.

“I want to urge you all not to be deceived and not support other candidates that will give you fictitious statistics, they are there to deceive you.

“Asiwaju Tinubu is the best candidate and the most suitable person to succeed President Muhammadu Buhari. Tinubu is a good manager of people and resources. We know he can take Nigeria to greater heights.

“Tinubu has the capacity to rule Nigeria with fairness, equity and justice. Asiwaju has done it and we can testify.

“We are anxiously looking forward to February 25, 2023. Our Prayer to God is that we will be victorious. With Asiwaju and Shettima, Nigerians will not regret,” Lalong added.

Also, Gov. Atiku Bagudu of Kebbi and Chairman of the Progressives Governors’ Forum (PGF), who spoke on behalf of all other progressive governors, commended Sanwo-Olu for organising such a massive rally.

Bagudu, who thanked Lagos residents for putting their faith in the former governor of Lagos state, said that Tinubu would run an inclusive government.

In his remarks, the APC National Chairman, Sen. Abdullahi Adamu said that Nigerians have huge hope in Tinubu, describing him as “the president in waiting of the Federal Republic of Nigeria”. (NAN)