Tiger nut: Why Nigeria must cut a piece of $1bn global market

Tiger nut, also known as the yellow nutsedge, is the tuber of the cyperusesculentus plant.  According to a US Transparency Global Market Research, the market… 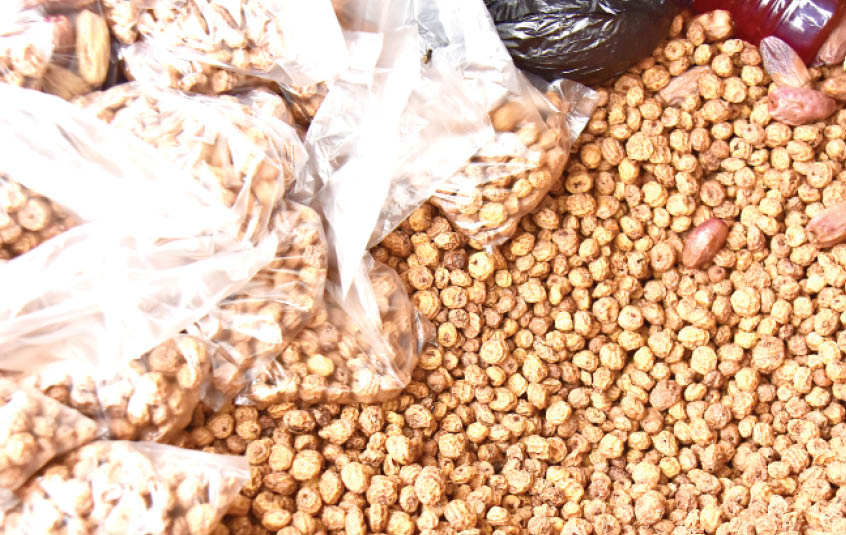 Tiger nut, also known as the yellow nutsedge, is the tuber of the cyperusesculentus plant.

According to a US Transparency Global Market Research, the market for tiger nut is projected to worth $319 million by the end of 2030.

However, it is estimated that the market the nuts milk will generate US$993.3 million in sales by 2030.

The tiger nut milk has been promoted for treating conditions like obesity, cancer, diabetes and high blood pressure.

However, the starch in the tubers limits the milk’s output because when the milk is pasteurised, the gelatinised carbohydrate causes a significant solidification of the milk.

Manufacturers in the tiger nut market are increasing their production of milk products since it solves problems of female fertility and erectile dysfunction.

As a result, producers are employing cutting-edge extraction methods, such exogenous amylases of animal or plant origin.

Consumption of tiger nut products, such as kunu aya (Hausa) across the country, is growing as health benefit awareness increases among consumers.

Researchers at the Federal University of Agriculture, Abeokuta, led by Dr Dare Akerele, examined tiger nut consumption in Ogun State, found significant consumption of the nut, but not many know about the huge benefit.

While many women are making a living selling kunu aya, some young men hawk it in wheelbarrows to earn a living. Exporters are also making money selling to Europe, Asia and the United States.

The Raw Material Research and Development Council (RMRDC) said if the crop’s value chain was adequately harnessed, it could fetch the country over N20billion annually.

The cultivation of tiger nuts requires mild climate and sandy soil. It is planted in April and harvested in November. The planting period is grouped into major (April-July) and minor (September-November) seasons.

Tiger nut requires irrigation until the tubers are due for harvesting. It has been established through R&D that the mineral content and acceptability of tiger nut milk is affected by location and planting period.

Tubers of tiger nuts can be utilised when they are fresh, semi-fresh or dry, depending on the products desired. Drying of tiger nut tubers is usually done by exposing them to direct sun rays with occasional turning, which ensures uniformity. A properly sun-dried tiger nut tuber takes one to two months to complete.

Many people who engage in tiger nut farming described it as one of the fast yielding crops but difficult as it requires money and time, hence the need for intervention.

It has majority of markets in Mani, Mashi Jibia Local Governments and Dankama town, all of Katsina State.

Tiger nuts usually grow in sandy areas where there is not much clay. It is related to Sahara areas, which serves as the reason why states in neighbouring Niger Republic are likely to produce it in large numbers. In Katsina State, Daura and Katsina senatorial districts have the largest farmers of tiger nut.

Speaking to Daily Trust on Sunday, a major farmer of tiger nut from Katsina State, Alhaji Lawal Yahuza Katsina, said tiger nut farming is different from other forms of farming as it involves a series of stages to follow in order to get more yields.

“The first thing you need is the seed, then land and planter. Tiger nuts need sandy land, unlike other crops. You need to ensure that the land is cleared and has no form of dirt. Your seed should also be good, although that is not a problem. You can just buy tiger nut in the market and use it as seed. These are the first set of things needed.

“For planting, all you need is a camel, cow, or even the traditional human labour. After harrowing the farm, you don’t need weeding or kwami, you just plant the seeds at a distance of one meter each. From then you wait until the seed reaches the level of fertiliser application, that is one to two weeks,” he explained.

“The harvest period is usually between November and January. The harvesting process is also entirely different from the normal farming process. After realising that the grass within the seeds has dried, that means it is ready for harvesting. From then you set fire on the farm until it burnt down all the dried grass, then dig the nuts under the ground and put inside sacks,” he explained.

Alhaji Lawan further said if one followed all the guidelines carefully, one could harvest up to 100 sacks of tiger nut in a hectare.

Speaking on market penetration, the farmer, who is also an exporter of tiger nut, said it was done in many ways. According to him, there are three major markets in Katsina—Mani, Mashi and Dankama—and people from different parts of the country go there to buy.

He said tiger nut was also packaged and transported to Netherlands, Spain and Brazil through Lagos.

He also said it was processed in northern Nigeria to make a lot of things, including milk and biscuits.

“Even countries abroad use tiger nuts to produce milk. They also use it to produce cakes. So the crop is very important and needs to be considered in other forms of farming,” he said.

‘Why government should support farmers’

One of the farmers said the crop was not given much priority in Nigeria due to neglect from the relevant authorities. He said if the government had provided the needed interventions for tiger nut farming, Nigeria would have been among top producers.

He said, “Tiger nut is very important and provides two vital things needed in human life – oil and milk. So, I think that with the government coming into it, there will be more profit and jobs for citizens. The last time we saw efforts from the government was in 2019, and since then, there has not been anything.

“During the 2019 Agric Show, we went and displayed our produce and how it could be processed in Nigeria. We performed excellently in the show and there was huge interest in what we displayed. But it ended there.”

He called on the government to intervene and support tiger nut farming so that it would be produced, processed and used in the country for health benefits and job creation.