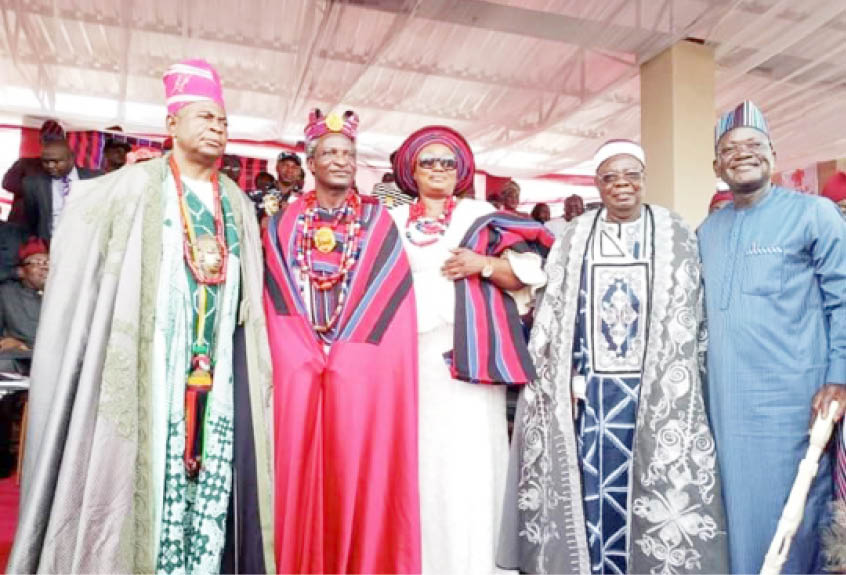 The new Och’Idoma (2nd left) flanked by his wife, the Attah Igala, Aku-Uka of Wukari and Governor Samuel Ortom

It was pomp and pageantry on Thursday as the ancient city of Otukpo—the Idoma traditional seat of power in Benue State—came alive with the coronation of Pastor John Elaigwu Odogbo as Och’idoma V.

Odogbo, a clergy of the Deeper Life Bible Church Christian denomination, had emerged on December 30, 2021 as the Och’Idoma-elect after a keenly contested election in Otukpo following the hunting expedition embarked on by the Och’Idoma IV, Dr Elias Ikoyi Obekpa, in October 2021.

The 53-year-old new king took his oath at exactly 1.50pm Thursday, June 30 and was thereafter presented with the staff of office by the governor of Benue State, Samuel Ortom.

Sequel to the establishment of the stool, HRH Agabaidu Ogiri Oko became the first Ochi’Idoma to mount the throne between 1947 and 1960. He was succeeded by HRH Agabaidu Ajene Okpabi, who reigned between 1960 and 1995, while HRH Agabaidu Edwin Ogbu took over as Ochi’Idoma III between January 10, 1996 and April 1996. It was after his demise that the deceased Ochi’Idoma IV Dr. Elias Obekpa ascended the throne on December 7, 1996.

People from all walks of life including the Aku Uka of Wukari, Gbom-Gwom Jos and the Tor Tiv, who are paramount rulers of their various kingdoms, as well as governors and senators graced the occasion to be part of the making of the new Och’Idoma. There were also cultural performances of troupes from Jukun and the nine local government areas that make up the Idoma kingdom.

Governor Samuel Ortom in his address shortly before presenting the staff of office to the Agaba-Idu, noted that under his watch the traditional institution in the state had made tremendous progress, adding that the welfare of traditional rulers has been given top priority.

“Your Royal Majesty, your selection by the selection committee as the 5th Och’Idoma has undoubtedly brought joy to the people of Idoma nation. I have no doubt that your reign will be peaceful. It is my further conviction that the support you are enjoying from your subjects will be sustained and together you can make Idoma nation better than you have met it.

“It is therefore a great joy to be here to perform the coronation of the Och’Idoma and present a staff of office to him. It is my hope that before long we shall gather once again to commission a befitting palace for the Ochi’Idoma, which is about 90 percent completion,” Ortom said.

The governor, who emphasised that the monarch emerged through divine providence, charged the royal father to rule wisely in order to attract development to his domain.

For the new monarch who was born on March 27, 1969 to the family of Elaigwu Ekoja in Obagaji the headquarters of Agatu LGA of Benue state, the occasion was the beginning of a fresh era in Idoma land as he promised to among other things ensure fairness, equity, justice and peace, adding that the whole Idoma land has been handed over to God Almighty.

He is a Fellow of Chartered Institute of Taxation of Nigeria (FCITN), 2001, Fellow Certified National Accountants of Nigeria, (FCNA), 2002 and an associate member of Nigeria Institute of Management (NIM).

Odogbo started his professional career with the Federal Inland Revenue Service, (FIRS) where he served for 23 years and rose to the position of an Assistant Director just as he held so many positions in the organisation during the period including being Chairman, Association of Senior Civil Servants of Nigeria for two tenures between 2004 and 2012. He left FIRS in 2016 to set up his consultancy firm and other related companies.

The royal father until his emergence to the highest traditional stool in Idoma land was a trainer (resource person in FIRS) and a thorough professional with vast experience in taxation and Accounting through International training and development.

However, the process which heralded his coming had in no small means generated controversy among the Idoma society, firstly because the new king as a pastor was administered the oath of office with a bible instead of “Alekwu” the traditional god of the people.

It is believed that the throne of Ochidoma has its roots in Alekwu which uphold the customs and values of the Idoma people, thereby ensuring justice as well as equity in the land. Traditionalists opined that any king who swears by the Alekwu is bound to do justice to the people or else risk the wrath of the gods if he goes contrary during the discharge of his duties.

Secondly, the Benue State Chieftaincy Law of 2016 on which Odogbo rode to the throne in the eyes of most people had seriously eroded some aspects of the centuries rich culture and tradition of the Idoma nation.

There were also contentions that apart from the act of selecting their new kings which was abridged by the new state’s law, the rites of passage of the former king usually unique, colorful and educative had been jettisoned even as no official announcement to that extent was made by the Idoma Area Traditional Council (IATC).

Besides, they worried that the bead from their ancestors often transferred to the new king (the òkà from the first king to the current one) wasn’t part of the event as it ordinarily should be when the new king steps out for presentation to the public after certain rites (passage of the former and seclusion of the new) are observed for a fresh start in the kingdom.

Reacting to this development, Professor Andrew Abah, who is a retired university don, decried an inroad into the Idoma culture as he blamed government for the intrusion.

“I think goverment had an upper hand or took it over. Our people have been overridden in terms of what should be done. I must say unfortunately; the legislative members have not been of help because this invasion by government started way back when the present government brought the law on chieftaincy and change the whole structure and procedures.

“Fortunately, Christianity has taken over the land otherwise the erosion of our culture would have had serious implications for the people. But, I believe most of Idoma land has been overtaken by Christianity and no wonder the Ochidoma is a born-again Christian,” he said.

He however contended that the people’s culture must be respected, pointing out that where the culture does not clash with Christianity, it ought to be maintained as what remains of the identity of a people.

Abah frowned that the usual time for mourning the departed king which also helps in preparing the ground for the next king was not observed just as he wondered why they rush things as if it were no big deal.

In the same vein, a Professor of History at the Benue State University (BSU), Prof. Armstrong Adejo, who also contested for the throne expressed worries about the issues generating controversies.

“These issues are current, meaningful, very cogent and they are worrisome. They have very grave consequences for the nation, for our culture, our people and for the children to know the proper things to happen. When a people’s culture is not respected; any people that have no identity and do not respect that identity, they are heading for extinction. The fact that they exist itself does not mean; what makes a people is the identity question and when that identity is challenged, it comes to a point that people are losing grasp of it, then you know the outcome is no more something which you can collectively call yourself a people.

“We have already been lamenting that the Idoma language is dying and that if we don’t do anything, in the next 50 years, we will not have an Idoma that you can call Idoma language and invariably, the language is part of the people, it’s part of the foundation of expression culture of a people, both the intellectual aspect, the material aspect, the religious aspect formed the real nucleus of the people’s existence.

“The ‘ocheship’ (kingship) is not something we invented overnight, it has been an evolutionary process with the people because there are serious observation that must be done to be able to validate a stool. It’s not just because somebody climbed but the passage through what the cultural demands are that makes that stool valid and a rallying point for people. So, some of us are worried, some are expressing it but some are not saying anything, but it doesn’t portends any goodness for anybody.

“At the end of the day, we are talking of legitimacy, if you sit on a seat and the type of people that should come there to pay you homage or give you that respect, honour are not coming forth, then you know something is not correct. The real beaded Chiefs of Idoma land are the people that validly had to first give validation to an Ochidoma stool before the government coronation takes place which is the ceremonial,” he emphasized.

He further stressed that the attributes of making a paramount monarch of the Idoma people itself had been taken away from the 22 beaded chiefs and that without them, it doesn’t make the stool valid but only a suspension of a problem to happen soon.

Adejo added, “You can even be sworn in with a Bible at the ceremony, but you should have been validated by the traditional prophecies that make you to become the Ochidoma through those beaded chiefs that have come far with the traditional royalty of oka, that is the bead itself, if they don’t validate that bead, it’s like the marriages we contracted these days which has not been validated by the two families and communities.”

On his part, Ankeli Amanyi, an Idoma stakeholder, said from his personal assessment he believes that the new king would do well on the throne as he said noted that the selection process through the chieftaincy law could have been corrected before the passage of the law itself, but nobody complained during the window period.

“I have had an opportunity to interact with him (new king) and I think he will marry the two (faith and tradition) together without compromising his faith,” he said.