At least 10 people were killed when jihadists attacked a northeast Nigerian town, burning down a UN office and prompting thousands to flee across the… 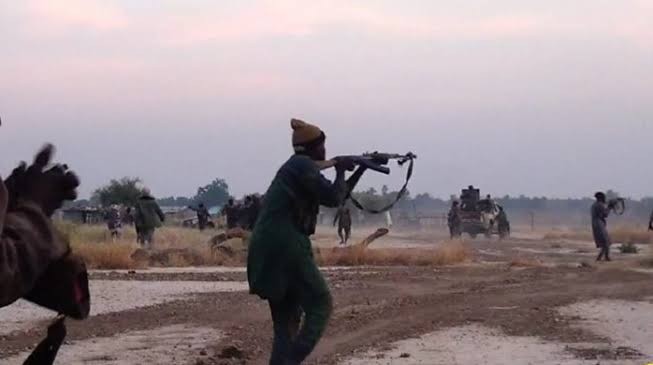 At least 10 people were killed when jihadists attacked a northeast Nigerian town, burning down a UN office and prompting thousands to flee across the border into Niger, local officials and the UN said on Thursday.

Fighters from the Islamic State West Africa Province (ISWAP) stormed Damasak in Borno state on Wednesday, the third assault on the town in a week, military sources and residents said.

Militants attacked Damasak’s garrison as residents were breaking fast on the second day of the Muslim holy month of Ramadan, clashing with troops before being forced to retreat and moving into the town itself.

“They engaged the troops in a firefight but were made to withdraw with aerial support.”

Kolo and another local official said ten people were killed in the attack.

The UN refugee agency earlier said eight people were killed and another 12 wounded, with preliminary reports showing 8,000 fleeing residents had reached the Niger towns of Chetimari and Gagamari.

“According to preliminary reports from our partners on the ground, the armed men also burned down several buildings, including a police station, a clinic, residences of local dignitaries and UNHCR’s Protection Desk,” it said.

Its statement said the full scale of displacement was still unclear as the humanitarian groups withdrew staff due to insecurity.

Nigeria’s military has struggled for more than a decade to end a jihadist insurgency in the northeast that has also spilt over into neighbouring Niger, Chad and Cameroon.

At least 36,000 people have been killed and two million have been displaced in Nigeria alone.

“There was an attack by the terrorists sometime yesterday but they were effectively repelled,” the statement said. “As we speak, troops are in total control of the general area.”

‘Supercamp’ strategy
Damasak is host to one of the Nigerian military’s so-called “supercamps”, larger fortified garrisons where the army is bunkered down in an attempt to better defend against attacks.

Critics and local residents say the strategy to pull back into larger bases has left jihadists freer to roam unchallenged in rural areas.

The Damasak attacks came as aid agencies warn they are struggling to respond to the crisis in the northeast because of worsening security, direct targeting of aid staff and military-imposed curbs, claims the government denies.

The EU said on Thursday it was following with “deep concern” the recurrent violent attacks on the town.

“Because of the recent increase of violence in Northeast Nigeria, hundreds of thousands of vulnerable people will be left without assistance in an area where humanitarian assistance was already struggling to reach all those in need,” EU Commissioner for Crisis Management Janez Lenarcic said.

Many residents had already fled Damasak towards the state capital Maiduguri or into the town of Diffa across the Niger border following three previous attacks since January, but other residents decided to stay back.

In video clips sent to AFP by sources, hundreds of residents are seen on foot and on donkeys moving along a bush path, laden with personal belongings, as they escape from Damasak.

The insurgents had previously attacked Damasak on Saturday and Tuesday, destroying humanitarian facilities and killing at least four people, including a soldier. They also hit the town in January.

ISWAP, which split from the jihadist group Boko Haram in 2016, has become a dominant threat in Nigeria, attacking soldiers and bases while killing and kidnapping civilians.

President Muhammadu Buhari’s security forces are battling on several fronts, including the northeastern jihadist conflict, criminal kidnap gangs in the northwest and a surge in separatist attacks in the southeast. (AFP)