The rise – and rise – of child rapes

Agatha is four years old, Hassana is eight, and their teachers sexually abused them. For weeks Agatha was a poster child of rape. Her voice… 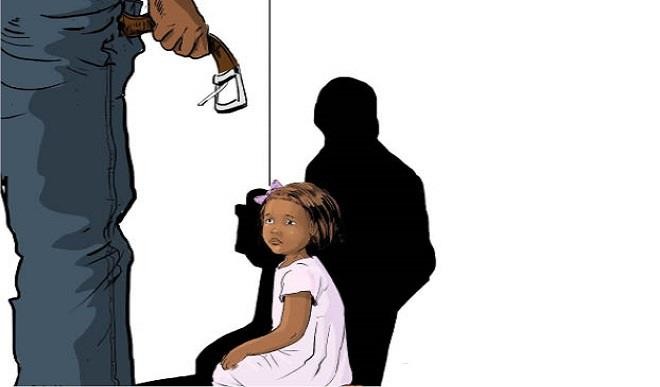 Agatha is four years old, Hassana is eight, and their teachers sexually abused them.
For weeks Agatha was a poster child of rape. Her voice held before microphones, her face was pixilated as she and her mother narrated how her school headteacher repeatedly abused her. Sometimes he gave her candy. It was in a low-rent neigbhourhood of Mararaba, Nasarawa.
Hassana’s abuse by her teacher was in an up-scale neighbourhood of Abuja’s Asokoro district.
In both cases, their mothers discovered the telltale bloodstains to their genitals.
“Children cannot protect themselves,” says Dr Princess Olufemi-Kayode, criminal justice psychologist, forensic interviewer and sexual violence expert who founded Media Concern.
“Though we educate them, the responsibility is not theirs. That will be for the adults. It is a societal issue, it affects every aspect of society whether at home, play, place of worship. You can be molested anywhere and those who do molest are part of society and can be anybody.”
And it isn’t just girls. Boys too are targets. In one of the most shocking, groups of men broke into a Kano hostel, held down boys and anally raped them night after night. In outrage, parents pulled their kids out of the school.
In what’s becoming a familiar occurrence, every newspaper has at least one rape story a day.
Analysts worry rape is underreported, but also raise concern that rapes have graduated from obscurity to visibility in the last 10 years.
In 2010, a helpline by the Lagos-based group Media Concern, which helps victims of sexual violence, took 3,000 phone calls – 716 of them were rapes. Across 19 police divisions in Lagos, only 278 rapes were reported in 10 years, it found.
Across the country, four in 1,000 girls experience sexual violence for the first time as early as age 10, according to the National Demographic Health Survey.
And every year, 9 million boys and girls suffer sexual violence but most never tell anyone what happened to them, a U-Report survey found.
But the first-ever Violence Against Children Survey released last year has become the latest shocking bible of sexual abuse targeted at children.
And the perpetrator almost always was someone known to the child. Strangers account for 13% of sexual abuse against girls and 4% of attack on boys. The others are authority figures, family members, neighbour, schoolmate.
For every one boy aged 13 or more abused in the last one year before the survey, two girls were abused – and the first time was before they turned 13.
Rashida and Joy shows the age of abuse is crashing and that it happens anywhere.
Abandoned by her father, 10-year-old Rashida, her mother and three siblings slept nights at Christ Apostolic Church in Tudun Wada neighbourhood of Lugbe in Abuja. One night a man broke in through the church window, clamped a hand over her mouth and raped her.
“He closed my mouth. He then told me that if I tell anybody, he’s going to kill me,” Rashida said.
The man was a neighbour, a married father of three living in a building next to the church. His single-room apartment window looked onto one of the church windows.
The man who abused two-year-old Joy in Mararaba was also a neighbour, husband to a pregnant wife. He was picked up by police and released within 24 hours.
“The sad part of this whole thing is the children are not protected,” says Dr Hussaini Abdu, country director of Plan International Nigeria. “The law is not properly enforced, the process of prosecution is weak, and even those cases that are reported by the media, you end up abusing them.”
That’s in reference to sensationalist splash of photos of abuse survivors across newspaper front pages.
“When those children grow up, become adults, they can completely be destroyed by the images of themselves they see when they are children,” says Abdu.
The UN Convention on the Rights of the Child is the gold standard Nigeria has signed onto. The result is the Child Rights Act, but in its 15 years of existence, only around 20 states have domesticated it. The 16 others, mostly northern states and Enugu, are still pussyfooting around protecting children.
Lagos upped the ante on vigilance, providing protective custody for children suspected to be in abusive condition, and requiring every place dealing with children – from church and mosques to schools – to have a child protection policy. The policy does not stop criminal background checks on potential employees but it means anyone can be held individually responsible when they do molest children, not hide behind the cover of their working institution.
“It puts everybody on their toes and makes institutions take responsibility of making sure their staff are trained in terms of being able to pick out if a child is abused,” explains Olufemi-Kayode.
Criminal prosecution is also on the cards.
“Most times even churches and schools are trying to cover it up. If it is made from the point of law and everywhere that deals with children, whether crèche or daycare, must have that policy, it helps,” she says.
By that token, a child protection policy could come to the same level as policy for HIV or fire in the workplace.
“But you live in a country where even staff of agencies of government that are supposed to be protecting children are recruiting children as house help,” laments Abdu. “That itself is a contradiction.”
Without firm policies to protect children, the “law can hang there and implementation is zero,” he adds.
All four girls (names changed) in this report know what that means. They still live with the memory of their rape, looking for justice.