The pandemic has accelerated demands for a more skilled work force

Even groups that regularly disagree on labor issues said there should be significant public investment in programs that can upgrade the skills of American workers.… 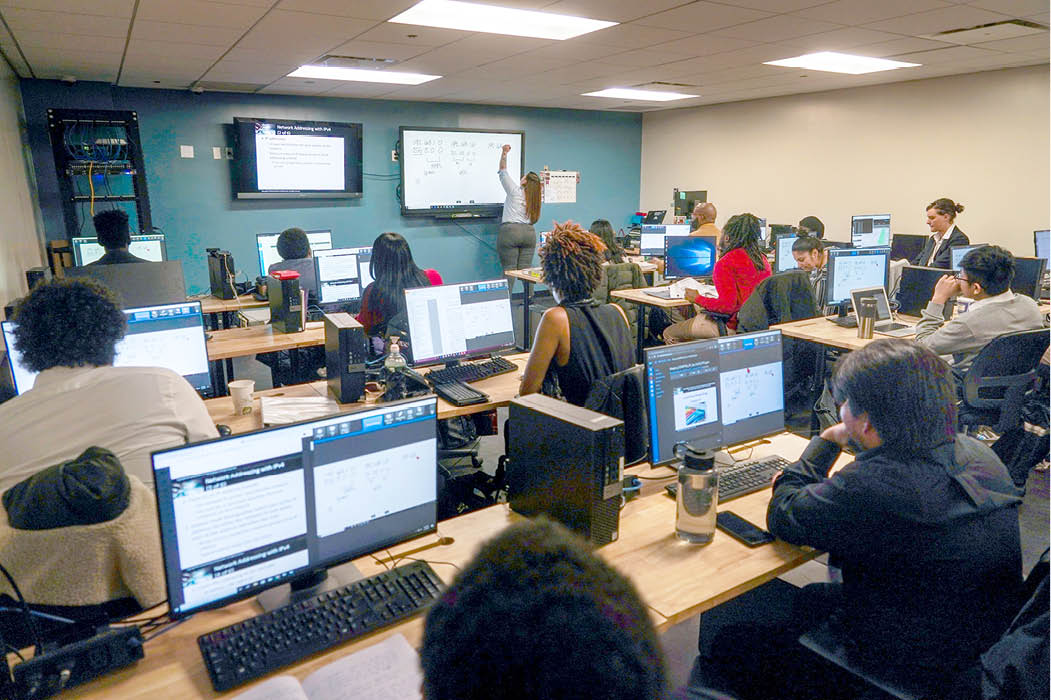 Students at Per Scholas in the Bronx in February. Programs like this that help prepare low-income adults for higher-paying careers have recently turned to remote teaching.

Even groups that regularly disagree on labor issues said there should be significant public investment in programs that can upgrade the skills of American workers.

Economists, business leaders and labor experts have warned for years that a coming wave of automation and digital technology would upend the work force, destroying some jobs while altering how and where work is done for nearly everyone.

In the past four months, the coronavirus pandemic has transformed some of those predictions into reality.

By May, half of Americans were working from home, tethered to their employers via laptops and Wi-Fi, up from 15 percent before the pandemic, according to a recent study.

The rapid change is leading to mounting demands – including from typically opposing groups, like Republicans and Democrats, and business executives and labor leaders – for training programs for millions of workers. On their own, some of the proposals are modest.

But combined they could cost tens of billions of dollars, in what would be one of the most ambitious retraining efforts in generations.

“This is the moment when we should make a significant public investment,” said David Autor, a labor economist at M.I.T., “when we should have a Marshall Plan for ourselves.”

A group of mainly corporate executives and educators advising the Trump administration on work force policy called for “immediate and unprecedented investments in American workers,” both for training and help in finding jobs.

And even before the pandemic, former Vice President Joseph R. Biden Jr. had proposed investing $50 billion in work force training.

In Congress, there is bipartisan support for giving jobless workers a $4,000 training credit.

The Markle Foundation has proposed federally funded “opportunity accounts” of up to $15,000 for workers to spend on training.

Union leaders have helped the administration in an effort to expand federal apprenticeship programs to a wide range of industries.

Past downturns have brought increased government aid for workers and training programs.

But labor experts say they have tended to be policies that recede once the economy recovers, as happened after the 2008 financial crisis, rather than becoming national priorities.

“The Great Recession was a lost opportunity,” said Lawrence Katz, an economist at Harvard University.

“Now, are we going to take this moment to help low-wage workers move into the middle class and give them skills to thrive?

“Or are they just going to go back to low-wage jobs that are dead ends?”

In the coronavirus economy, companies are adopting more automation, as they seek to cut costs and increase efficiency.

There is debate about which jobs are most at risk and how soon.

But climbing up the skills ladder is the best way to stay ahead of the automation wave.

Middle-class jobs in today’s economy often require some digital skills but are not considered tech jobs.

Data scientists at LinkedIn, a Microsoft subsidiary, recently mined millions of job listings to identify 10 occupations most in demand in recent years and likely to remain so.

Researchers at the Markle Foundation, in a report published last year, studied the pace of digital tools moving into occupations during the previous decade.

The fastest rates of digitization were in jobs in retail, warehouses and health care.

So a training path might be to help a home health worker acquire the skills to become a medical technician.

Job training in America has often been ineffective, with programs shaped by local politics and money spent according to the number of people in courses rather than hiring outcomes.

The United States also spends less than other nations on government employment, training and other labor services.

As a percentage of economic activity, Canada spends three times as much, Germany about six times more and Scandinavian countries up to more than 12 times as much, according to the Organization for Economic Cooperation and Development.

But there are encouraging pockets of success in America.

Some are nonprofit programs like Year Up, Per Scholas and Project Quest, which prepare low-income adults for higher-paying careers in technology, health care, advanced manufacturing or business.

In recent months, these programs have quickly changed to online teaching and coaching from in-person programming.

In addition, online training on learning networks like Coursera and Udacity and at digital-only institutions like the Western Governors University, experts say, can be engines for upgrading the skills of many workers in America.

Two years ago, Tony Boswell, 50, decided it was time for a career change after 14 years as a long-haul trucker.

“I figured I had to do something else,” Mr. Boswell recalled.

At home in Kansas City, Mo., when his truck engine was being rebuilt, he applied for a Google scholarship to pay for a three-month course in software development on Udacity.

Mr. Boswell got the scholarship and then another one for a six-month Udacity program to become a website programmer, saving him the $1,800 cost of the courses.

Through days and nights of effort, Mr. Boswell mastered the digital tools of his new field.

Today he works for a software development company in Kansas City.

He makes nearly $60,000 a year, substantially more than he netted most years as a truck driver.

“I have a life now, and a future,” said Tony Boswell, a former long-haul trucker who studied to become a software engineer.

“I have a life now, and a future,” said Tony Boswell, a former long-haul trucker who studied to become a software engineer.Credit…Shawn Brackbill for The New York Times

Nearly 15 percent of people earning bachelor’s degrees in nursing in the United States last year graduated from Western Governors University, an online nonprofit university focused on working adults who want to learn new skills. Sarah Williams was one of them.

For Ms. Williams, a 38-year-old working mother of three, the online program was the only realistic option.

Wrestling with college-level statistics and organic chemistry was daunting.

But she made it through in eight months, with frequent encouragement and help from her mentor.

“No way I could have done it alone,” Ms. Williams said.

The vital role of human assistance, delivered in person or online, by a mentor or coach is a common thread in skills-building success stories.

Another essential element is employers being engaged as participants in worker training.