Thailand has appointed the first Muslim woman governor, a sign of “improvement of Muslim women in politics,” according to observers. Pateemoh Sadeeyamu, 57, has been… 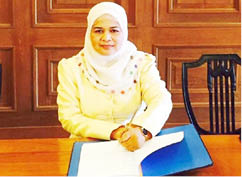 Thailand has appointed the first Muslim woman governor, a sign of “improvement of Muslim women in politics,” according to observers.

Pateemoh Sadeeyamu, 57, has been appointed as the new governor of southern Pattani province.

The Thai Cabinet approved the elevation on Tuesday.

With a career spanning almost 29 years at the Interior Ministry of the Buddhist-majority nation, she earlier served as deputy governor of Narathiwat province.

Preparation for 2023 hajj begins next month-NAHCON

“This is a huge development. Being a Muslim and a woman holds many challenges in Thai politics,” Yasmin Sattar, vice dean for Academic, Research and Foreign Affairs at Prince of Songkla University, Pattani, told Anadolu Agency on Wednesday.

“We could see the improvement of Muslim women in politics,” Sattar said of Sadeeyamu.

Of the 77 provinces, four southern provinces of Pattani, Yala, Narathiwat, and Songkla have seen conflicts for several decades with National Revolutionary Front as the main rebel group.

Sadeeyamu’s elevation as provincial governor is seen as “leading to the positive perception of many Muslims.”

This could lead to more trust in the Thai state, which is crucial to ending the conflict, said Sattar regarding peace efforts between the Thai government and insurgent groups in the southern regions.

Beginning her career three decades ago, Sadeeyamu served in the southern provinces of Ranong, Yala, and Pattani.

She also served as director of a central administrative office of the Southern Border Provinces Administrative Centre before being appointed as deputy provincial governor of Phatthalung and later Narathiwat from where she was picked to head the governorate of Pattani province.

The insurgency in southern Thailand originated in 1948 as an ethnic and religious conflict in the historical Malay Patani region.

Southern Pattani, Yala, Narathiwat, and Songkhla provinces have a large Malay-Muslim community – Patani – with 1.4 million residents, according to government data.

According to the monitoring group Deep South Watch, more than 7,000 people were killed and 13,000 injured in the armed conflict from 2004-2020. (Anadolu Agency)