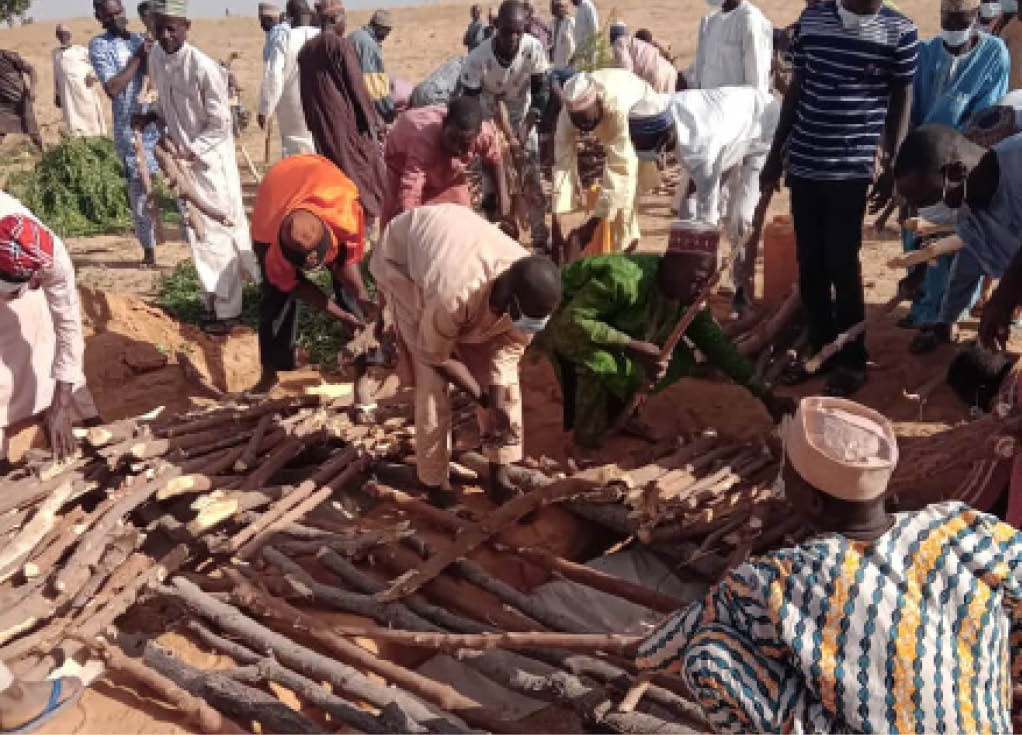 Bandits have struck again in Sokoto kidnapping 11 persons, among them a Chief Imam, Aminu Garba, who was preparing to lead Juma’at congregational prayer at Gatawa Village in Sabon Birni Local Government Area of the state.

The Imam was kidnapped along with three others on Friday.

The kidnapping occurred on a day a high-powered delegation headed by the National Security Adviser, Maj. Gen. Ali Monguno (retd.), visited the state on a fact-finding mission.

Before then, bandits had on Monday ambushed a vehicle at Gidan Bawa Village in the same local government, set it on fire and watched 23 passengers burn to death.

Two passengers who survived later died of the injuries sustained in the attack.

The member representing Sabon Birni South constituency in the state assembly, Sa’idu Ibrahim, who confirmed the attack, said the injured persons were receiving treatment at a hospital in Wamakko.

He said the leg of another woman who was shot at Dama Village was amputated because it could not be fixed.

When contacted, the spokesman of the Sokoto Police Command, ASP Sanusi Abubakar, said he would contact the officer in charge of the area and get back to our reporter.

He had yet to do so as of press time.

A former governor of Sokoto State, Attahiru Dalhatu Bafarawa has berated President Buhari over his failure to pay a condolence visit to the state after the killing and burning of travellers by bandits.

He said the president was treating the lives of the people that elected him as worthless.

Speaking to BBC Hausa Service on Saturday, Bafarawa expressed his disappointment over Buhari’s failure to address the growing insecurity and killings in Sokoto, Zamfara and Katsina states.

He said Sabon Birni, Shinkafi and Goronyo were in a dire situation.

“We only depend on God for protection. It is only on God that we depend for his protection, not anybody.

“We are sad and disappointed with the way Buhari’s administration is treating our region.  I was governor for eight years and I know the responsibilities placed on me when I was the governor.

“The saying that security is everybody’s business is true, but the onus rests with the leader, like President Muhammadu Buhari who swore with the Qur’an to protect their lives,” he said.

In Borno State, suspected fighters of the Islamic State of West Africa Province (ISWAP) on Saturday abducted an unspecified number of passengers along Damaturu-Maiduguri Highway.

The incident occurred near Benishek town, the headquarters of Kaga Local Government Area of Borno State at about 8.30am.

However, the Nigerian Army yesterday debunked a rumoured abduction of travellers on the Maiduguri-Damaturu Highway.

Daily Trust report that the highway is the only road “standing” that links Borno State with the rest of Nigeria.

All the other roads: Gombe-Damboa-Maiduguri; Yola-Bama-Maiduguri; Maiduguri- Monguno-Baga; and Maiduguri-Dikwa-Gamboru/Ngala are under siege as travellers cannot travel freely without the support of well-armed security operatives.

Even though not completely immune from attacks, the Damaturu-Maiduguri Road had been the last resort of thousands of travellers, including articulated vehicles that supply food, fuel, drugs and other basic necessities of life to Borno.

A security source said yesterday’s attack was launched when commuters were heading to Maiduguri from Damaturu, Yobe State capital, but were intercepted a few kilometres after Benishek.

“Yes, there was an attack on motorists this morning along Damaturu-Maiduguri Highway; these senseless people abducted an unspecified number of passages around Benishek and Mainok axis. We don’t have more details than this,” the security source said.

The Chairman, North East Network of Civil Organisation, Amb Ahmed Shehu, told our correspondent that he also received reports that some passengers were abducted.

“Yet another abduction in Damaturu-Maiduguri route this morning. Why can’t we have a sustainable solution to this reoccurring misfortune?” Shehu queried.

As of the time of filing this report, there was no official confirmation from any quarter.

But credible security sources told Daily Trust on Sunday that ISWAP fighters have been migrating towards the central and southern parts of Borno State from the fringes of the Lake Chad.

“With the decimation of the Abubakar Shekau faction, the ISWAP is pushing to have a solid ground around southern Borno, covering Damboa, Chibok and other LGAs,” one of our sources said.

“You know they were responsible for the attack on Damboa not long ago during which an army general was killed. I can assure you that their plan is to have serious base around Alagarno forest which traverses parts of Borno and Yobe states.

“That is why you see them crossing the road along Benishek in Borno,” he said.

“They have been making endless plans to make the Damaturu-Maiduguri Road tough for commuters and it would be a disaster if they succeed,” he said.

“This is not the first time they are making attempts; they have killed hundreds of people on that road in the last 12 years,” he said.

Borno residents and motorists who spoke to one of our correspondents have expressed fears over the recurring attacks and abductions along the Maiduguri-Damaturu Highway.

A commercial driver, Alhaji Abdullahi, said the insurgents waylay travellers along the road at will, adding that there were more attacks between November and January in the past few years.

“Many drivers and travellers were abducted along the highway last year around December. There were two known abduction incidents in this month alone apart from those that have not been made public. The governor had to visit Auno town along the road to talk to residents and calm their nerves. He also voiced out concerns over the attitude of security personnel last year,” he said.

Reacting on the highway abductions, the Chairman of National Union of Road Transport Workers (NURTW), Borno State, Alhaji Abba Shuwa, said drivers were getting jittery with the spate of abductions on the highway.

“Any commercial driver that travels along the highway now is in fear because of the periodic attacks on vehicles plying the road.  We are baffled to hear that most of these incidents happen between Auno town and Benishek,” he said.

Shuwa said although a number of travellers abducted along the highway have been freed, a number of others have not been accounted for.

“We normally report these cases to the security personnel and anytime abductees are released, we take them to the appropriate agencies for investigation and for the record,” he said.

While noting that troops have been increased to provide protection keep along the highway, he called on authorities to take additional security measures to protect travellers.

In Kaduna, bandits abducted a mother and four of her children at their residence in “Oil Village”, Sabon Tasha Community of Chikun Local Government Area of Kaduna State.

Daily Trust on Sunday learnt the abduction happened in the wee hours of yesterday.

They also attacked Sabon Tasha GRA in Chikun Local Government Area of Kaduna State where they set a house ablaze.

Sources said that the immediate response of soldiers who engaged the bandits in a gun duel made the bandits flee.

Our correspondents gathered that the bandits invaded the community around 12.30am to abduct innocent residents of the area.

A resident of the area who simply identified himself as Benjamin said the house burnt during the attack was empty.

It was learnt that the bandits attacked the community two days ago and took away a man, his wife, and daughter.

It was also gathered that the gun duel which lasted for an hour between the soldiers and the bandits made residents to flee the area.

The Police Public Relations Officer in Kaduna, ASP Jalige Mohammed, confirmed the abduction in a statement.

He said the incident happened simultaneously with another kidnap attempt that was foiled by security agencies in same community on the same day, adding that efforts were ongoing to rescue the victims.

The PPRO said the command received a distress call from the first community at Sabo GRA as the bandits were forcing their way into a house but the attack was foiled based on security agents’ quick response.

“Unfortunately, it was discovered that the bandits operated simultaneously with one at Oil Village in the same Sabo location where they kidnapped a woman and her four (4) children to an unknown destination,” he said.

He urged members of the public to promptly report suspicious situations and incidences to elicit a quick positive response from the Command.