The extension of the tenure of the Inspector General of Police (IGP), Mohammed Adamu, by three months was announced after close to a week of… 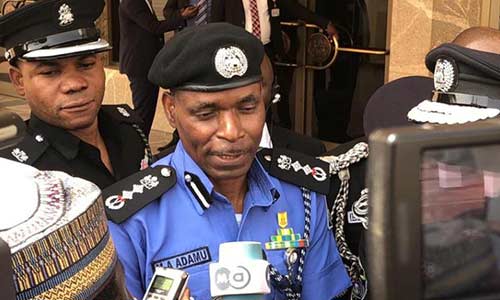 The extension of the tenure of the Inspector General of Police (IGP), Mohammed Adamu, by three months was announced after close to a week of doubts, speculations, and even outrage from some Nigerians who expected him to have retired having spent the maximum 35 years in service on February 1, 2021.

Not a few Nigerians were taken aback by the extension by President Muhammadu Buhari which was announced on Thursday by the Minister of Police Affairs, Muhammad Dingyadi. The minister said the extension was necessary to give room for proper selection of a successor.

Many Nigerians expressed displeasure over the development, which they noted had become the norm in this administration. They maintained that apart from disrupting succession process,  the development would not help the security situation in the country in any way.

Among Nigerians who spoke was a Senior Advocate of Nigeria (SAN), Afam Osigwe, who is a former Secretary General of the Nigerian Bar Association (NBA). He said Adamu was no longer a police officer capable of being appointed in acting or substantive capacity to head the police force.

Osigwe added that the action of the president was in violation of the Police Act 2020 which expects a police officer to retire upon the attainment of 60 years or after 35 years in service.

He said, “It appears that the ex-IGP has attained that position. So for the president to legitimately or lawfully extend the tenure of the IG, he has to be a police officer. Unfortunately, Adamu is no longer a police officer capable of being appointed in acting or substantive capacity to head the Nigeria Police Force (NPF).”

First of all, if the president knew he had the intention of extending the IGP’s tenure, he should have done that before the retirement date, especially since the date was well known beforehand. That would have eradicated the speculations and uncertainty that trailed the retirement. Many Nigerians had hoped that the government had learnt its lesson from the episode with the service chiefs whose time in office became so long that many felt they no longer had anything to offer thereby leading to calls for their removal.

It will be unfortunate for the police to experience the same fate as the country simply cannot afford that. Nigeria is at the moment facing several security issues ranging from insurgency to banditry to armed robbery and citizens are looking up to the men of the police force to provide succour by arresting the situation. Having a leadership problem will not in any way help to address these problems. Anything that could distract the police personnel should be avoided. Also, Nigerians need to have confidence in their police force. So everything humanly possible to achieve that should be done.

The government needs to show that it is on top of the nation’s affairs, and one way of doing that is by making sure that replacements are found long before serving officers tenures expire. Retaining people who ought to be out of office is not good for the system as it dampens morale of others still in service.

Now that the president has said the extension is for three months, we urge him to commence a search for the IGP’s replacement immediately and not wait until the time lapses to avoid what happened in the first instance. Also, early search will help to get the right person for the job and all necessary screening can be done to ensure a smooth transition. There is a need for the government to review its handling of succession in all sectors as this is not the first time such is happening.