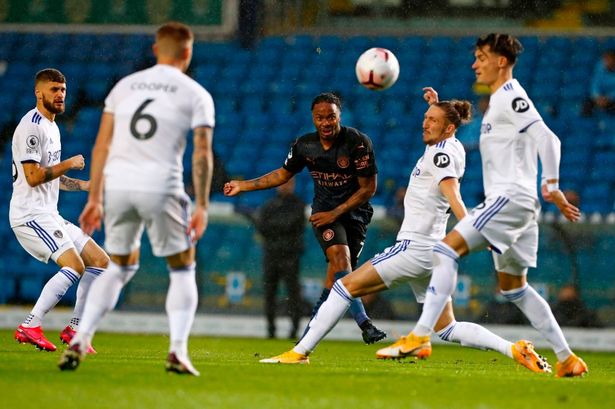 Leeds United dealt a blow to Manchester City’s march towards the English Premier League courtesy a 2-1 win at the Etihad stadium despite playing the whole of the second period with ten men.

Man City need 11 more points to clinch a third EPL title in four seasons but Start Dallas’ double ensured they collected none in the first league game of the weekend.

Following a narrow win over Borussia Dortmund in the first leg and with a visit to Germany in the coming days, Pep Guardiola kept Kevin de Bruyne on the bench while Sergio Aguero was not in the squad.

The outcome was a surprise defeat, the third at home this season. It is the first time Pep Guardiola has lost three league matches at home in his managerial career.

However, it was the visitors that took the lead three minutes before the interval as City switched off at the back.

A ball over the top saw Helder Costa locate Patrick Bamford who teed up Dallas to fire home a surprise lead from 20 yards.

A minute later the Whites were a man down, Liam Cooper’s dangerous tackle on Gabriel Jesus called back by VAR and the referee Andre Mariner sent off the defender following a review from the pitch-side monitor.

Leeds, however, held on for a halftime lead and were ultra-defensive from the first minute of the second period, not helped by City camping inside their half.

They finally found the breakthrough with the 24th through Torres, the Spaniard burying Silva’s cutback into the far corner for 1-1 on 76 minutes.

Manchester City are winless in their last nine matches after going behind and Leeds made it 10 with a heartbreak goal in injury time via a clinical counter attack. Ezgjan Alioski’s through ball sent Dallas clean through on goal and the Northern Irishman finished with aplomb through Ederson Moraes’ legs to seal an unlikely win.

Marcelo Bielsa’s Leeds won with just 30% possession and rise to ninth in the EPL table while Man City are still 14 points ahead of second-place rivals Man United but have played two games more.