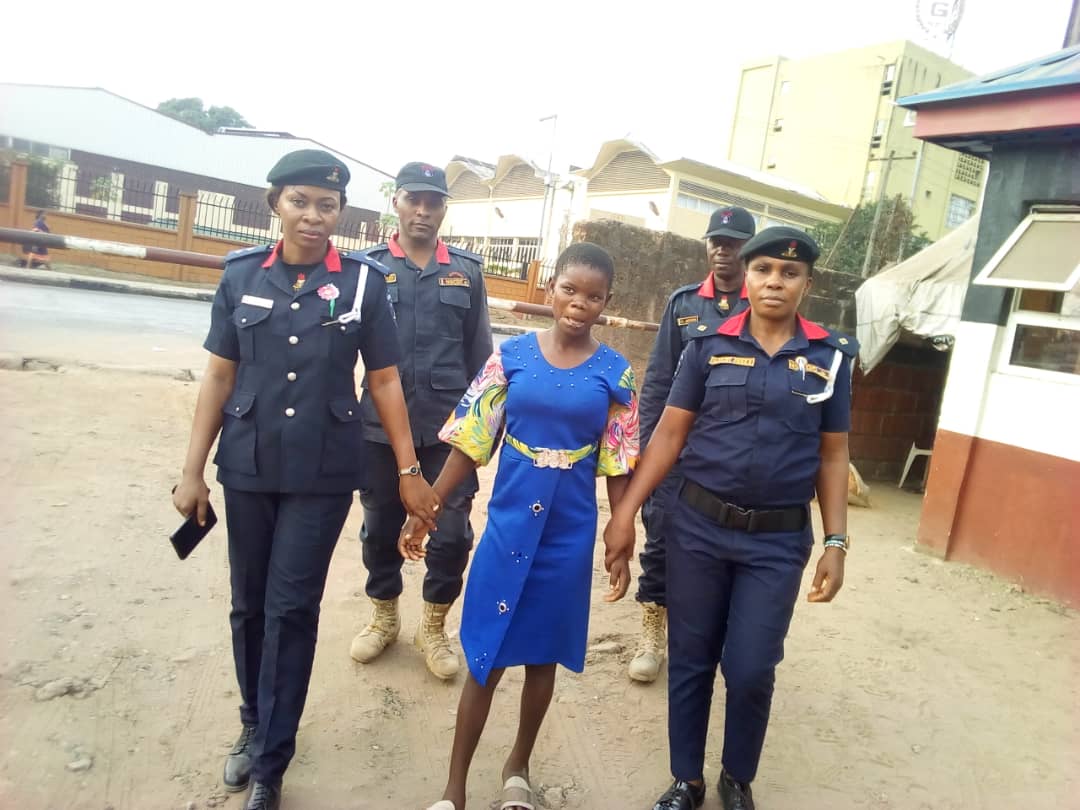 A teenage househelp reportedly pushed off the second floor of a building by her master has been rescued and her keepers arrested by the Nigeria Security and Civil Defence Corps in Abia.

Thirteen-year-old Uduak Akpan, of Ododo, Essien Udim, Akwa Ibom, was said to have been pushed off the building on Friday 8 in Port Harcourt, Rivers.

Vincent Ogu, commandant of the NSCDC in Abia, where Igwe fled in the wake of the incident, said investigation is ongoing into the men’s role in the attack on the teenager.

Uduak’s photo went viral on social media after it was first posted on Twitter.

She’s a house help. Her master dropped her from the balcony of the 2nd floor of a 2 storey building
Location is 204 Niger opposite Newday dast food Aba
Please let’s make this trend and get her justice pic.twitter.com/PZjFCZaHP2

A user @Obaino posted two close photos of Uduak injured and bleeding, with the message: “She’s a house help. Her master dropped her from the balcony of the 2nd floor of a 2 storey building Location is 204 Niger opposite Newday dast food Aba Please let’s make this trend and get her justice”.

Facebook was a platform where more caustic comments trailed the incident.

NSCDC on Tuesday confirmed the address of the incident after Igwe was arrested in Abia where he had fled.

Narrating her ordeal in the hands of her abductors, little Udauk said she was brought to Aba as a house help in November, 2020 by a man popularly known as Mbakara and handed her over to her mistress – Aniekan Emeka (Mrs) who she said has been a nightmare to her life.

On Friday, 8th January, her mistress accused her of stealing N500, which Uduak denied.

According to the victim, her mistress started beating her and the husband – Emeka Igwe upon return to the house equally descended on her with his belt.

In fear, frustration and to escape further beating, she jumped from the balcony of the second floor of the two-storey building where they reside.

At this point, the suspect Emeka sensing the girl may have died fled and relocated outside Abia State to evade justice.

Ogu said the arrest of both men followed the public outcry prompted by the “viral information on social media”.

“When I got the disturbing information on the ordeal of the little miss Uduak Akpan Willy (the rescued victim) from Mrs Chinememma Umesaka – the Special Adviser to the  Governor of Abia State on Teenage Matters, I quickly mobilized my men and ordered them to rescue the victim and arrest the perpetrators of this dastardly and inhuman act against this minor,” he said.

“I am happy for the swift response of my men to the order which has led to the successful rescue and arrest of the victim and suspects respectively.

“The NSCDC Aba South Divisional Officer- Superintendent Uche Uduma proved he is really on ground as he tactically coordinated the search and rescue team dispatched from the Command Headquarters leading to this huge success thereby bringing the suspects to face justice”.