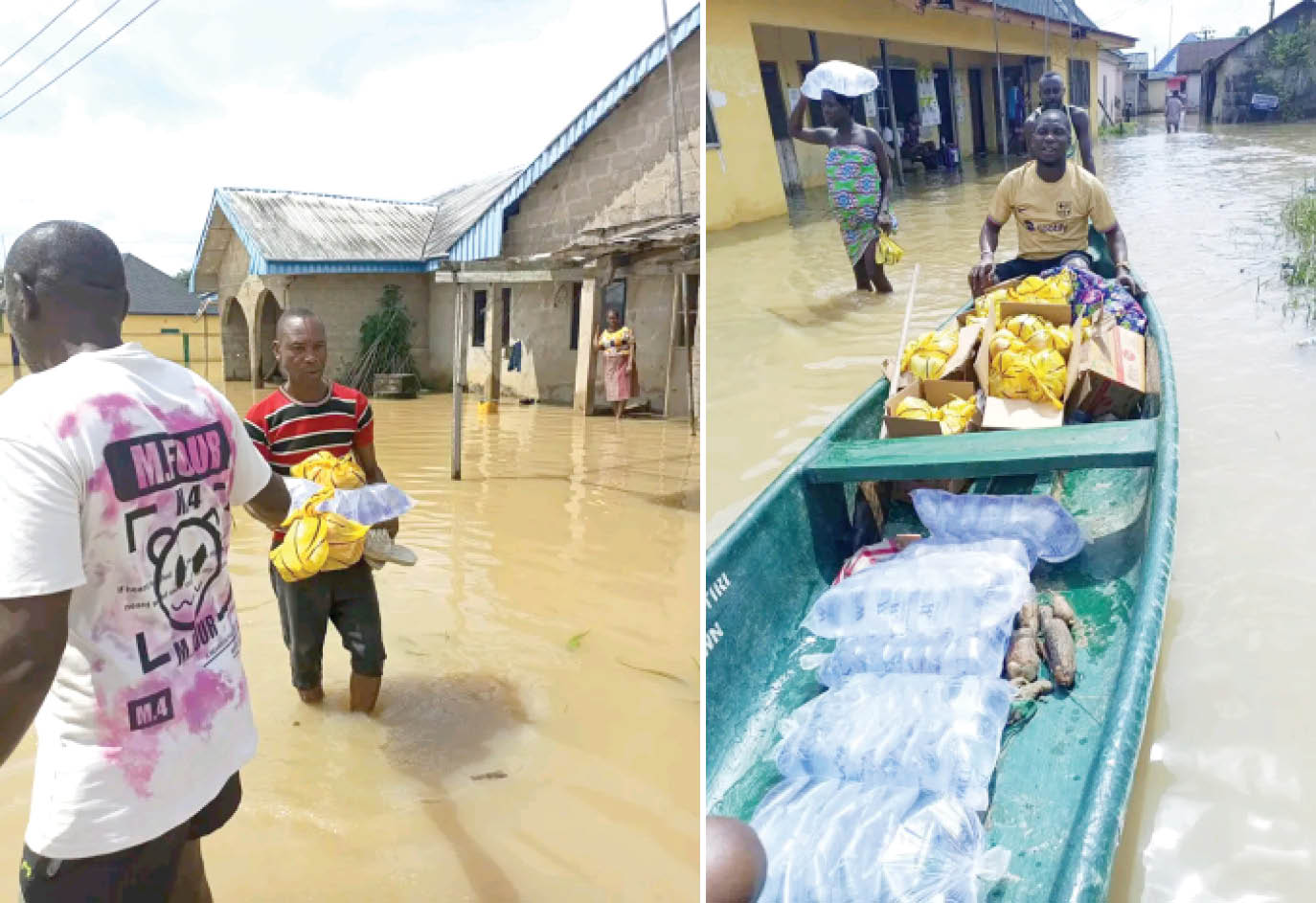 It is a tale of owes and lamentation across rural communities in Bayelsa as residents battle for survival following the devastating floods that have taken over the state for more than two weeks now.

Though flooding has become a yearly occurrence in the state, the residents said this year’s was the worst they have experienced.

Reports said flood water had submerged most communities and settlements and blocked the East-West road in the state from both Patani in Delta State and Ahoada-Mbiama in Rivers State.

Many residents told Daily Trust that the current flooding is worse than that of 2012, when the state last experienced such a disaster.

According to official data from the state government, about 700,000 people in 300 communities have been displaced while flood water has submerged the communities and damaged several properties.

Daily Trust reports that at the moment, there is no entry or exit route to and from Bayelsa State by road, thereby heightening concern among the people of the state.

Already, many people are now living in Internally Displaced Persons (IDP) camps, while those who cannot be accommodated in the limited camps have resorted to erecting tents along streets.

With the flood waters blocking all the land access to the state, and movement in and out of the state has been stalled, food and other essential items no longer come into or go out of the state, thereby creating an artificial famine for residents.

The state’s airport at Amossoma is also affected as the access road has been cut off by flood water, while the runway and other facilities have also been flooded, thereby making it impossible for aircraft to land at the moment.

Though few lives have been lost to the disaster, the state government is yet to come up with official data on the casualties.

Consequently, business owners who had stored food items before the flood blocked the access roads to the state have hiked their prices by more than 100 per cent.

Also, a litre of fuel, which was sold at N190, now goes for N800 as the petroleum marketers have stopped bringing products to the state.

Prices of gas and kerosene have also gone up as people cannot access farms to fetch firewood for cooking.

Farmlands, crops, and fish ponds have all been affected by the flooding, while residents are now left to their fate.

Residents of Aeroplane Road at the Azikoro axis of Yenagoa have, in particular, raised alarm over the health implications of floating corpses in their community.

A resident of the area, Mr Emmanuel Oden, while speaking with newsmen, lamented that corpses were seen floating in the area.

Some of those displaced told the Daily Trust that they were forced to abandon their houses without picking up any valuables due to the speed at which the water level rose.

At the Igbogene axis of Yenagoa, the gateway to the state capital, where flood water has taken over the entire environment, one of the victims, Mrs Juliet Akporuku, said she and her family go out every day in search of a place to sleep on higher ground.

She said:  “Water has been getting into my house since last Sunday. Since then, I have been staying out here. My business has also been affected. It’s a trying time for us, but we know God will show the way after the flood; we are praying for life.

“My provision shop in front of the house has been taken over by flooding.”

Other displaced people, Jonnie Thompson and Ngozi Mbadinauju, said a 16-year-old boy in the community was even killed by the flood.

“We don’t know where help will come from; there is a scarcity of everything here. We just pray this will end very soon for us to return to our normal lives.

Another victim at Azikoro community, Grace Henry, said though the prices of virtually everything have gone up, her prayer is that the water recedes so that normal economic activities return to the state.

“Food items donated by the state government and other good people cannot go round considering the number of displaced persons. Our only prayer is that the water goes down, so that we can return to our normal lives.”

The Ibenanaowei of Ekpetiama Kingdom and Chairman, Bayelsa State Traditional Rulers Council, King Burayo Dakolo, said the kingdom lost a baby of less than one year on Monday due to the flooding.

“The water from the river has entered everywhere and you can’t access Agudama community by road anymore. At Tombia, they are using canoes. Akaibiri is under water, and Bomundi is largely under water. In Gbarantoru, some houses are flooded. The king’s palace is also being threatened by water.

“We are now using the primary school and the available spaces to accommodate the victims. My guest house is also being used by some flood victims,” he said.

A transporter, Adebanjo Samuel, told Daily Trust that the situation is out of control and he has decided not to charge passengers travelling to Port Harcourt from Yenagoa again but just drop them near the flooded section of the East-West road to continue with their journey.

He said they are apprehensive that the flood waters could sweep their vehicles away if they continue with the journey.

He said the situation was made worse by the shortage of petrol in Yenagoa, with a litre now being sold for N800.

Also, a tricycle rider in Yenagoa, Victor Akpan, blamed the hike in transportation fares on the flooding.

At Swali market, a food dealer, Tare Joshua, said food items are not brought to Yenagoa due to the flood that has cut off the East-West road.

Governor Douye Diri, while visiting IDP camps at Oxbow Lake, Igbogene and Okolobiri areas of the state, pleaded with traders to empathise with Bayelsans and be their brother’s keeper.

The governor, who also undertook an aerial inspection of Biseni and Sampou along the East-West road to ascertain the level of damage caused by the flood, advised residents to be more careful as they move around.

He said: “Well, we have not gone around fully, but from the few places we flew over, it is the same story everywhere. People are living in inhuman conditions. It is something that you can’t even wish on your enemy, but that is our fate for now.

“Let me use this opportunity to call on all of us who are business owners. This is the time that you can give your products, where possible, free.

“I would like to call on our people to be their brother’s keepers and to have empathy for the poor Bayelsans.”

He said he had directed the Commissioner for Mineral Resources and Petroleum Products to ensure that he engaged a barge to bring in petroleum products from Port Harcourt to Yenagoa.

“He also appealed to security agencies in the state that have such barges to assist in moving goods around the state. He assured that petroleum products and other goods brought in would be sold at official prices.

“We don’t want our people who are already on the ground to continue to suffer from the hike in petroleum product prices,” the governor said.

Daily Trust reports that Governor Diri had last week, approved the sum of N450 million for the relocation of people displaced by flooding across the state to higher ground and for the provision of relief materials.

Meanwhile, some public-spirited individuals, political party candidates and prominent Bayelsans have devised a means of using canoes to distribute food items to residents trapped by the flood in various communities.

Daily Trust gathered that some politicians are also using the opportunity to sell their candidature.