Zamfara state House of Assembly has alleged that the suspended chairman of Shinkafi local government area of the state, Alhaji Muhammad Sani Galadi, is threatening… 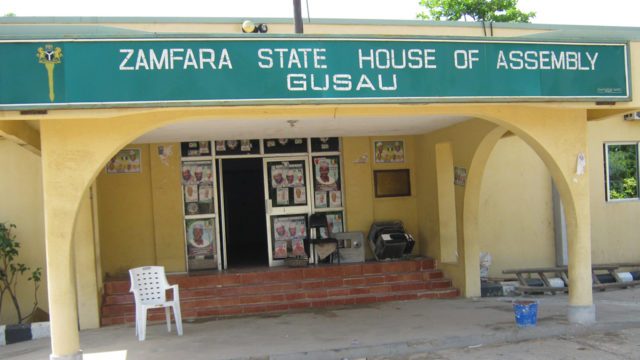 Zamfara state House of Assembly has alleged that the suspended chairman of Shinkafi local government area of the state, Alhaji Muhammad Sani Galadi, is threatening those who forwarded petitions against him to the House.

The chairman, House committee on Information, Hon. Shamsuddeen Hassan said in a press conference that the House received petitions from seven people but when the time for investigation by the House was fixed, they were able to trace only four petitioners as the remaining three were nowhere to found because of the threats issued to them by the suspended council chairman.

The House also reaffirmed their position that Alhaji Sani Muhammad Galadi is still under suspension till the conclusion of investigation embarked upon by the Joint Committee constituted by the House on the petitions written against him.

The House Committee chairman on Information, further debunked reports by media that the suspended chairman was exonerated and has been reinstated.

“The House of Assembly came across media reports credited to the suspended chairman in which he was claiming that the constituted Joint Committee investigating petitions written against him has exonerated him and he had been reinstated.

“It is not true at all, because right now we are still waiting for three other petitioners out of  seven to show up before the Committee to affirm their appended signatures on the petitions upon which we recommended more time should be given for them”, Shamsuddeen stated.

He however warned the suspended chairman, to for the sake of maintaining peace and respect for the laws, abstain with immediate effect from parading himself as Chairman of Shinkafi local government council until the conclusion of the ongoing investigation of the committee.

It will be recalled that the Zamfara state assembly had earlier slammed a suspension on the local government chairman after its committee said it found him guilty of diverting N23 million meant for disbursement to victims of armed banditry attacks in his local government.