Muslims, Christians among victims Assailants said they were after men – Woman ‘My father was killed because he could not run’ ‘Invaders came from neighbouring… 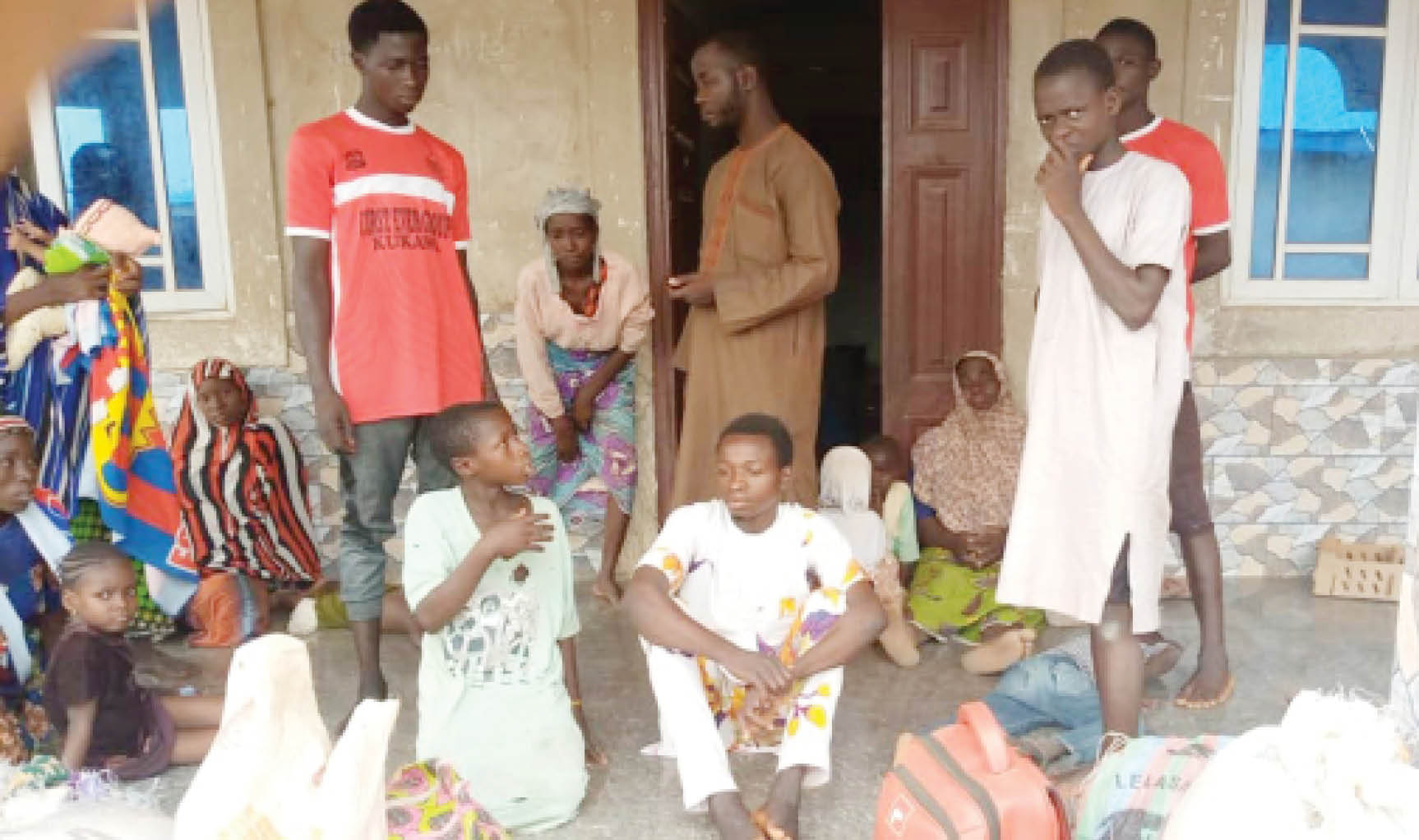 Assailants said they were after men – Woman

‘My father was killed because he could not run’

Survivors of Sunday’s attack on some villages in Kanam Local Government Area of Plateau State yesterday recounted what they saw, describing the onslaught as devastating and unforgettable.

The attack, which was launched by scores of armed wielding terrorists lasted between 11am and 3pm unchallenged.

They reportedly killed both Muslims and Christians with those who survived the assault saying many of them had given up because there was no help in sight while the killings lasted.

Some of those who spoke to our correspondent yesterday said the attackers who rode on motorcycles targeted men in the affected villages as they told women not to panic.

Their mission was not clear yet as this was the first time such carnage was perpetrated in the affected communities.

Locals including community and political leaders said the attack was well planned because the perpetrators first blocked entry points and destroyed telecommunication masts to prevent the victims from calling for help before they went on a killing spree.

Zainab Musa, a resident of Kukawa, who survived the onslaught, told our correspondent that the attack was horrible and terrifying that she could not easily forget.

“When they arrived, we started hearing gunshots from all directions. Some of the men of the village immediately fled to bushes to take cover but the women including children locked themselves inside their rooms.

“Sadly, men who could not make it to the bush were killed instantly. I saw how they were shooting and killing the men. We heard them saying we are only looking for the men and not for women, “she said.

“The situation was pathetic. You would see people running and falling to escape the attack, especially the men who were being searched for. My husband survived the attack.

“After the attackers left the village, my husband looked for a motorcycle, which carried us together with the children to Dangi where we are currently living. The bandits have really destroyed the village. They burnt down many houses. In Kukawa alone, we have lost lots of people (Muslims and Christians).

“They operated from 11am to 3pm freely because there was no security to prevent them. The sound of gunshots had led to the death of a woman, “she added.

Abubakar Jibrin, another resident of Kukawa, said they were all taken by surprise. He added that when the gunmen invaded the village they suddenly started shooting on sight.

He said: “I believe that the bandits came to the village after realising that our vigilantes have gone out for an operation somewhere far away from the village. I saw how people were being killed. They came on motorcycles in their numbers. If they see you running, they would pursue you on the motorcycle and shoot you at close range.

“On all the motorcycles, one man was driving the motorcycle while the other one sitting in the back seat was shooting people. Wherever you run to, in the bush, they follow you. The motorcycles were more than 70. So, they came in large numbers. I lost my father in the incident. I am now taking refuge in Wase town, “Jibrin added.

Daily Trust reports that hundreds of people, who fled their homes, are currently taking refuge in Dangi, the headquarters of Kanam LGA and Wase town in Wase LGA. Some of the survivors, who spoke to our correspondent, said they wouldn’t go back to the villages unless adequate security personnel were deployed to their areas.

Many residents of the attacked villages alleged that the bandits came from Kambari, in Karim Lamido LGA of Taraba State, which shares a border with the villages of Wase.

This claim could not be authenticated by our reporter.

Contacted on the latest development, the Spokesperson for the state Police Command, ASP Ubah Gabriel, didn’t respond to calls by our correspondent. The command had earlier confirmed the attack.

But the Information Officer of Operation Safe Haven (OPSH), Major Ishaku Takwa said they have deployed personnel to the area assuring that everything was calm now.

“I cannot give you the casualty figure now because we are not getting the phone number of those deployed to the areas. They are in a thick forest.”

The state government had in a statement on Monday condemned the attack and ordered security personnel to arrest the culprits. However, no state official has yet visited the area.

Daily Trust reports that Sunday’s incident was so horrible that residents of the affected villages never dreamed to witness, looking at how peaceful people of the entire Kanam Local Government Area of Plateau State have been living for many decades.

While other parts of Plateau were synonymous with uprisings, the Kanam area was known for peace for decades.

The disturbing nature of the attack and killing cannot be easily wiped out in the memory of the survivors and sympathisers especially those who saw how people were shot at close range and macheted for no reason.

Prior to the attack, residents of Kanam also said they had never experienced even a communal clash among the various communities that make up the local government area. They said in the last two decades when the state was experiencing ethno-religious violence, Kanam has been peaceful.

The Chairman of Kanam LGA, Alhaji Dayyabu Garga, who spoke to Daily Trust on the incident, said this is the first time communities in the LG were experiencing such attacks.

He said: “We didn’t expect this to happen to any of our communities. But the only thing, if I can remember vividly was that sometime around November – December last year, some criminals would come and kidnap one or two persons and ask for ransom. That had been on for quite some time. That was what we experienced at that time.

“Realising that we empowered our vigilantes especially those at the grassroots to provide security to villages within the LGA, we didn’t know such gruesome murder would befall our communities.

“When this incident happened, it was difficult to get to the communities because the roads leading to the villages are not good. So even if you tell security to go there, they would find it very difficult to get there on time due to the terrain. It takes over an hour to get there. During rainfall, it takes more than two hours. So, that has been the challenge.

“There was a time, soldiers had an operation in some of their hideouts and killed many of the bandits. The bandits often come in their numbers. Those villages, which were attacked, are close to a thick forest that is almost a 42 km drive.

“Security and vigilantes often pursue them into the forest to fight them. This time around nobody expected them because the vigilantes had gone out for an operation and suddenly, they (bandits), appeared from another direction in their numbers and invaded the villages, “he said.

The chairman further explained that it was a coordinated attack and that was why they destroyed the telecom masts to prevent the villagers from calling for help.

“They divided themselves into three. They carried out the attack simultaneously and that was why they were able to finish the attack within a short period of time. They broke into shops and carted away food items and other valuables.

“I and other sympathisers visited the affected communities and buried over 100 bodies. Those who were injured have been taken to various hospitals for treatment,” he said.

No mercy for perpetrators – Buhari

President Muhammadu Buhari said yesterday that the perpetrators of the terrorist attacks in the Kanam and Wase communities should get no mercy and not be allowed to escape justice.

The president, in a statement issued by his media aide, Garba Shehu, described the killings as heinous.

President Buhari, who directed that “They should not be spared or forgiven”, also ordered law enforcement agencies to work strenuously with the government of the state, to bring the situation under control and take steps to bring the culprits to justice quickly.

The president, who expressed condolences over the terrorist incident said that as a matter of priority, peace must return at all costs to the state and the entire country.

“I urge all our citizens, the people of Plateau State in particular to expose the perpetrators of such incidents, their sponsors and those who encourage such criminals who carry out these dastardly acts of murder so that the law will take its course. They must not be forgiven,” the president said.