A civil society group in Osun State, Concerned Citizens of Osun, has claimed that the State Government paid a sum of N1m to the leadership… 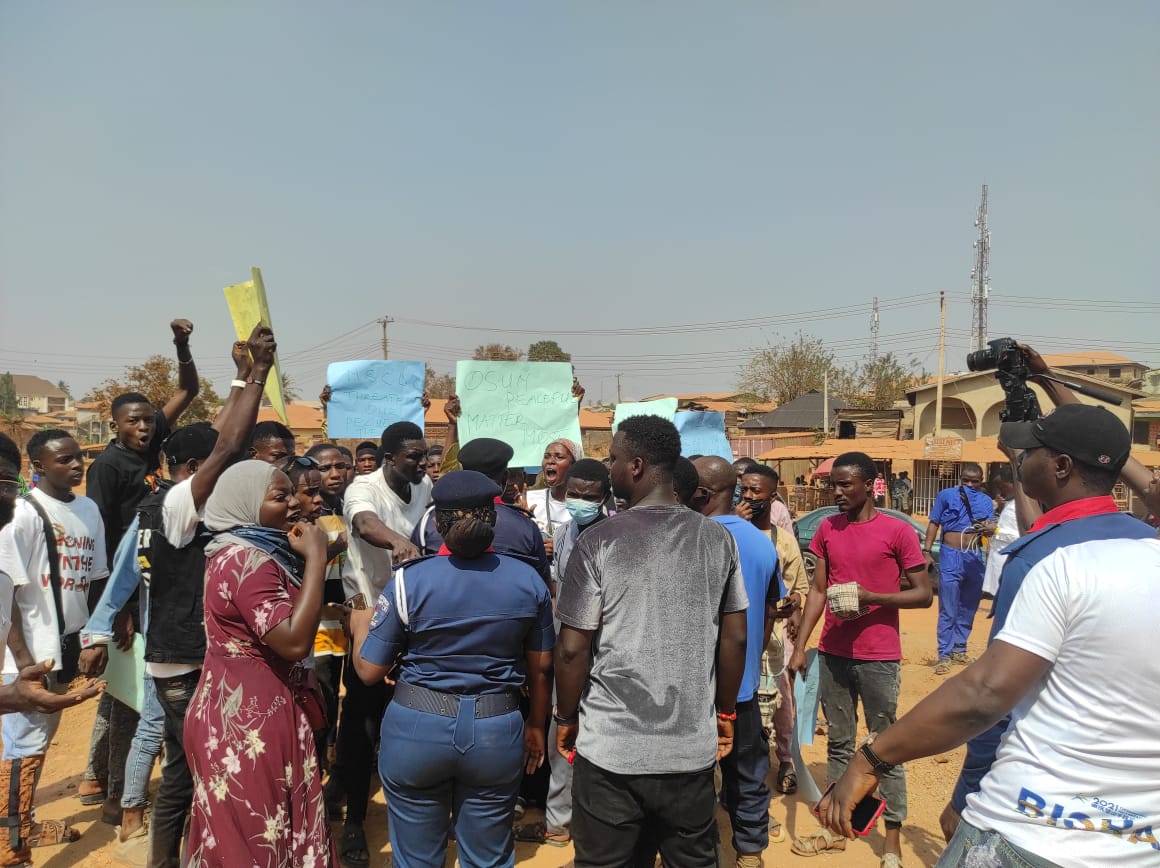 Scene of the protest

A civil society group in Osun State, Concerned Citizens of Osun, has claimed that the State Government paid a sum of N1m to the leadership of the National Association of Osun State Students (NAOSS) to protest against the Nigeria Security and Civil Defence Corps (NSCDC) in Osogbo on Tuesday.

According to the group, NAOSS leadership was procured to stage the protest by the government through a Senior Special Assistant to the Governor, saying that the demonstration against the NSCDC was politically motivated.

The group in a press statement signed by its Public Relations Officer, Afeez Olakunle, said it was unfortunate that the state government is dragging students into the internal crisis rocking the All Progressives Congress (APC) in the state.

It noted that the action of the students is nothing but a show of shame and display of condemnable partisanship.

The group questioned why NAOSS had not issued just a statement on the insecurity and political violence in the state, arguing that the student body has clearly shown its bias with the sponsored protest it embarked upon on Tuesday.

The statement reads in part: “It is a shame that NAOSS, a supposed intellectual body of students, could sell itself so cheap to accept a sum of N1m from the state government to protest against the NSCDC in the state.

“The question to ask NAOSS leadership is that: why had it remained silent on the series of insecurity occurrences and political violence in the state? Why did NAOSS choose to protest against NSCDC which is doing its job of protecting the lives and property of the people of the state? Why is it that it was a government official, SSA, that was mobilising media for the NAOSS protest?

“There is no sincerity in the NAOSS protest. It was a show of shame. It is unfortunate that the state government is dragging students into the internal crisis rocking the APC.

“This cause of action of NAOSS is highly condemnable, as it veered off its main cardinal objective of seeking the welfare of the students in terms of bursary and other packages that could alleviate the poverty that is confronting the indigenous students under the current administration.”

But the NAOSS chairman, Moshood Yusuf denied the allegation. He said, “We are independent and acted independently without any external force. We acted with good faith to protect the recurrence(s) of such an act.

“We cannot fold our arms until our people are being massacred by the recklessness and unprofessionalism of the NSCDC before we take a bold step to curb it,” Yusuf said.