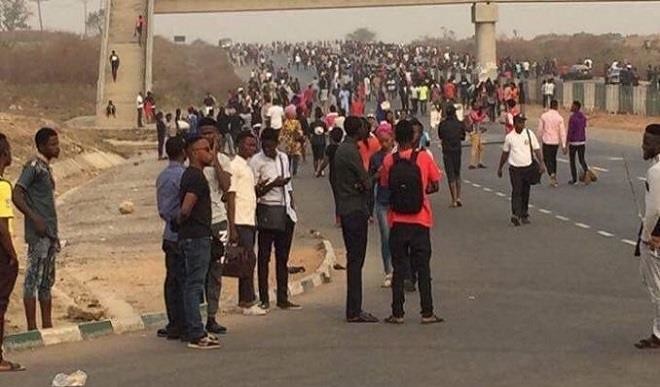 The National Association of Nigerian Students (NANS) has knocked the federal government and the Academic Staff Union of Universities (ASUU) over their inability to reach an agreement which has resulted in industrial action by ASUU.

NANS, in a statement Monday by its President, Asefon Sunday Adedayo, threatened to embark on a nationwide protest to force lecturers back to class.

ASUU had declared a four-week strike effective from Monday, February 14, 2022, to protest the government’s failure to implement its agreement with the union.

The President of ASUU, Prof Emmanuel Osodeke, at a press briefing in Lagos, said the union tried to avoid the strike but that the federal government was not responsive to its demands.

Osodeke said the forceful payment of ASUU members’ salaries and emoluments with the Integrated Payroll and Personnel Information System (IPPIS) and non-adoption of the University Transparency and Accountability Solution (UTAS) have continued to short-change the union members.

Other issues raised by the union included failure to release the white paper many months after the visitation panels to universities submitted their reports; non-payment of outstanding Earned Academic Allowances (EAA), illegal withholding of payment of EAA to union members at the Obafemi Awolowo University (OAU), Ile-Ife as well as victimisation of academics in state universities.

The NANS president blamed both the government and ASUU for the industrial action, saying the student body expected both parties to reach a compromise and do all that was required to avert the strike.

He said, “The government and ASUU, by this action, send a direct message to Nigerian students to also take position comfortable for our side of the table irrespective of the implications.

“Let me say equivocally that we will respond in clear language, the language the oppressors understand.”

He said NANS’ collective response to the strike action would be made known at its congress scheduled for February 17.

He further said, “Our decisions shall be decisive, collective, and irreversible until the strike is called off. We shall fight this impunity and recklessness without any consideration other than an immediate end to this strike.”

The Vice-Chancellor of the University of Ilorin, Prof Sulyman Abdulkareem, has said industrial action does not portend well for students and lecturers.

Abdulkareem said even as a member of ASUU as far back as 1996 he never believed going on strike was the right thing to do.

In an interview with Daily Trust, the VC said both the federal government and ASUU should devise another means to settle grievances rather than going on strike.

Prof Abdulkareem also clarified the return of Unilorin ASUU into the mainstream national body, saying it was the national leadership of ASUU that sought to reconcile with the local chapter.

He said, “Each time we go on strike, my view is still the same. It is bad for the lecturers and equally bad for the students. Continuity breeds or develops something in you that you cannot equate to the broken or abridged acquisition of knowledge.”

Meanwhile, ASUU has declared as illegal the appointment of the Minister of Communications and Digital Economy, Dr Isah Ali Pantami, as Professor of Cyber Security by the Federal University of Technology (FUTO), Owerri.

FUTO had, during its 186th council meeting, elevated Pantami alongside seven other academics to the rank of professorship.

The union’s President, Prof Osodeke, while addressing newsmen on the resolutions of the National Executive Council (NEC) which held in Lagos, rejected the minister’s appointment as professor, saying it violated the established procedure for the appointment of professors.

The ASUU NEC, therefore, directed all members of the union throughout the country not to recognise or treat Pantami as a professor of cybersecurity under any guise.

It also resolved to sanction all ASUU members that participated in the process that led to the “illegal” appointment in accordance with the established procedures of the union.

ASUU also accused the Joint Admissions and Matriculation Board (JAMB) of encroaching into the university autonomy.

Prof Osodeke said JAMB had no powers to decide qualification for admission or give admission or delist programmes of universities.