Students in the University of Jos have said the strike action by the Senior Staff Association of Nigerian Universities (SSANU) and NASU, is affecting their… 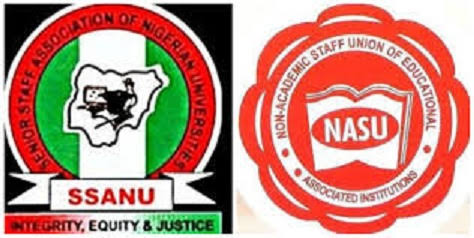 Students in the University of Jos have said the strike action by the Senior Staff Association of Nigerian Universities (SSANU) and NASU, is affecting their lectures.

They also said the strike affects their wellbeing, concerning the COVID-19 pandemic, as staff manning the gates to ensure COVID-19 protocols compliance were no longer there.

Hommualak Shinman, a student of Criminology called on government and the university staff to resolve the issue before the strike takes a greater toll on students.

A 200 level student of economics, Abigail Adama, said their toilets, both in the hostels and the classes were dirty and a health risk.

At Plateau State University (PLASU) Bokkos, Ezekiel Dajen Luatei, said SSANU/NASU members in the school were yet to embark on strike.

Luatei, who is the Student Union Government (SUG) President, said the staff were attending to students doing their registration.

From the University of Ibadan, A 300L student of Anthropology who simply identified himself as Olusegun described the strike as “a threat to destiny”.

“We have wasted time with the ASUU strike. Now, instead of starting work in earnest, SSANU and NASU have embarked on theirs. Where is the future,” he said.

At the University of Lagos (UNILAG), physical classes have not been held since January 25 when it commenced its first semester with online lectures against the COVID-19.

The ongoing strike action may therefore not have a significant impact on academic activities.

However, the industrial action has disrupted the ongoing first semester examination at the Lagos State University (LASU).

However, in Rivers State University, academic works are unaffected despite the strike by SANU and NASU across the country.

A student of Rivers State University, Izuchukwu Oforji, said they have been attending lectures and other academic activities in the school.

Another student of the university, Barrinee Jona, said “I went to the bursary to pay some fees and I was attended to.

“All the lightning systems are on and we have been attending lectures and going to classes to read in the night with lights on,” he said.

Meanwhile, the Senior Staff Association of Nigerian Universities (SSANU), has appealed to students, parents and guardians not to see their strike as something done in bad faith.

President of SSANU, Mohammed Haruna Ibrahim, in an exclusive interview with Daily Trust in Abuja, said members of the union were worried that the students who just returned to school after staying at home for 10 months would likely return home until government did the needful.

He maintained that the strike by the unions was to get the “best for the students” in terms of character moulding and environment.

Daily Trust reports that SSANU and NASU under the auspices of the Joint Action Committee (JAC), on February 5 directed all its branches to commence an indefinite strike to press home their demands bordering on alleged injustice on sharing formula of N40bn Earned Allowance and non-payment minimum wage arrears.

Other issues raised include: inconsistencies in the implementation of the Integrated Payroll and Personnel Information System (IPPIS), delay in renegotiation of FG/NASU and SSANU 2009 agreement, non-payment of retirement benefits of outgone members among others.