As the 2023 presidential election approaches, some Nigerians on social media have expressed their views on the people jostling to take over from President Muhammadu… 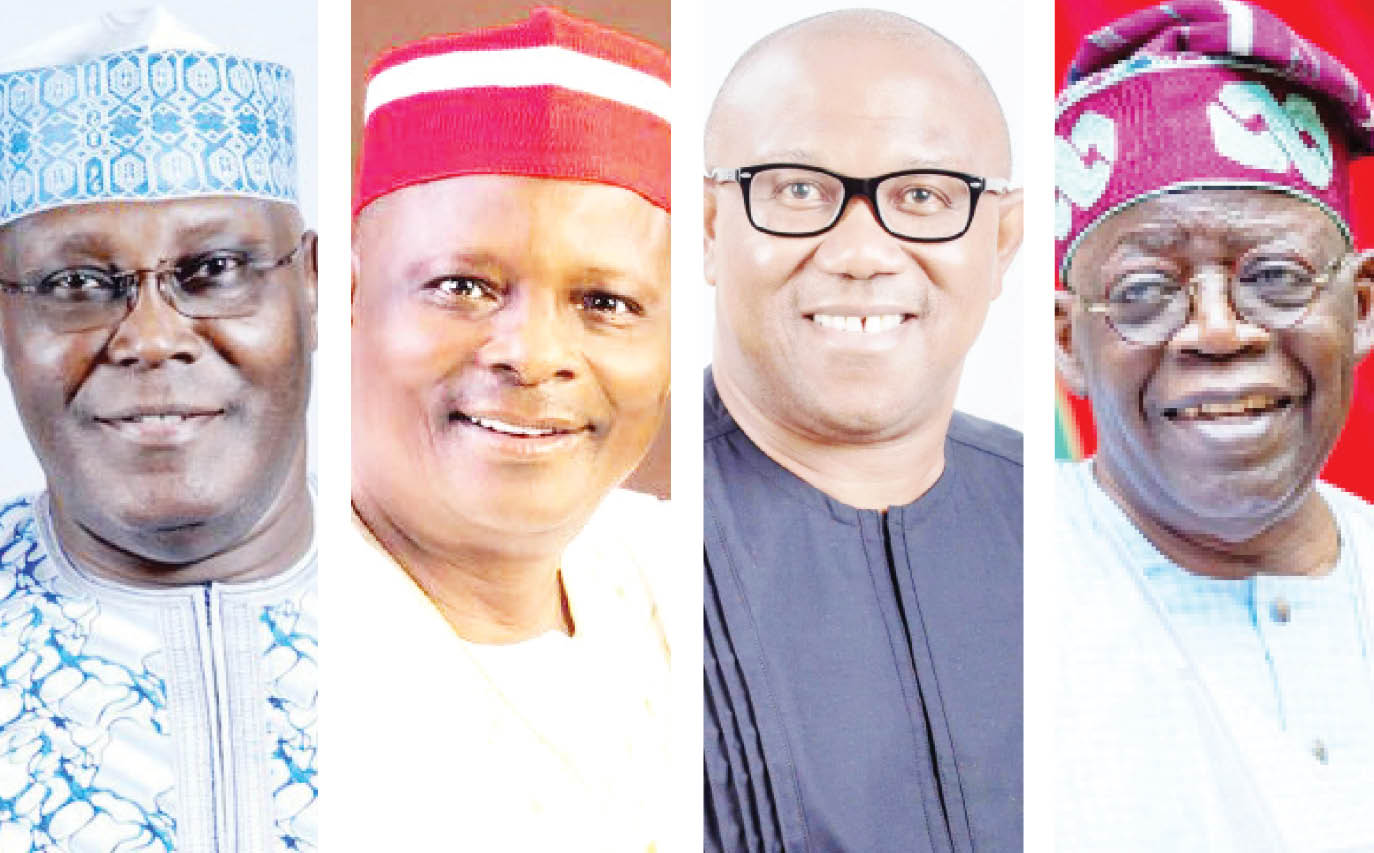 As the 2023 presidential election approaches, some Nigerians on social media have expressed their views on the people jostling to take over from President Muhammadu Buhari as regards insecurity.

Insecurity is one of the biggest challenges in Nigeria. Almost every part of the country is currently battling an insecurity problem the current government has not been able to bring an end to.

The Boko Haram insurgency has been raging for over 13 years. The group has been known for its brutality and since the insurgency started in 2009, it has killed tens of thousands of people, in frequent attacks against the police, armed forces and civilians.

According to the United Nations, Boko Haram has resulted in the deaths of more than 300,000 children and displaced 2.3 million from their homes, and was the world’s deadliest terror group during part of the mid-2010s according to the Global Terrorism Index.

Of the 2.3 million people displaced by the conflict since May 2013, at least 250,000 left Nigeria and fled to Cameroon, Chad or Niger.

The group has carried out massacres including the killing by fire of 59 schoolboys in February 2014 and mass abductions including the kidnapping of 276 schoolgirls in Chibok, Borno State, in April 2014.

About a hundred groups of bandits with over 30,000 militants are operating in the North West, killing, maiming, and kidnapping innocent citizens and residents of the region.

The Centre of Democracy and Development for West Africa, CDD, identified the key actors and drivers of the violent crime that has killed over 12,000 and displaced over one million persons in the region.

Although there have been heated debates over the motivations and agenda of the terrorists, locally referred to as bandits, CDD dispels reports that the violent entrepreneurs are sponsored by the North East’s Boko Haram insurgents, aggrieved politicians, the Fulani ultranationalist, or foreign powers.

In the South East, there is the proscribed Indigenous People of Biafra (IPOB) which was designated a terrorist organisation in 2017 under the Nigerian Terrorism Act.

IPOB has been accused of killing security operatives, politicians, traditional rulers and ordinary citizens. Its members were also fingered in the destruction of symbols of authority like police stations and INEC offices, among others.

In the South South, the challenge posed by the Niger Delta militants occasioned by oil theft has denied Nigeria the opportunity to fully benefit from its oil wealth.

Almost all the presidential candidates have agreed that insecurity is one of the major challenges facing Nigeria, and have made certain promises to tackle them.

The presidential candidate of the Labour Party, Peter Obi, during an interview with Daily Trust said he would dialogue with the leadership of the proscribed IPOB and other agitators to restore peace in the country if elected president.

Obi has also on many occasions said that when elected as president of Nigeria, tackling insecurity would be his first priority.

The presidential candidate of the All Progressives Congress (APC), Bola Ahmed Tinubu, during an interactive session with Arewa Joint Committee, a coalition of some northern groups, said, “We will address the welfare and training needs of our security personnel and strengthen our security institutions with modern technology and other equipment to better position them to respond to modern challenges that we face in a fast-changing world.”

The presidential candidate of the Peoples Democratic Party, Atiku Abubakar, has many times insisted that one of the measures he would take to address insecurity if elected as president come 2023 is by devolving the police.

During his presidential campaign in Benin, Atiku said his administration would create state police to tackle insecurity in every nook and cranny of the country.

During a two-hour Twitter Spaces session on Friday organised by Daily Trust in partnership with CDD, some social media users expressed their views on the presidential candidates based on the insecurity challenges in Nigeria.

“For instance, go to Anambra and check what Peter Obi has done. If a presidential candidate cannot condemn a proscribed organisation that kills Nigerians daily, then what can he do about insecurity?”

Maziii said, “You have to look at the past before talking about the future. These people have lied to us so many times previously. The truth of the matter is that these guys have deceived us a lot and we should stop listening to these guys.

“Let’s talk about the presidential candidates. We have somebody like Atiku in the PDP, we have Tinubu in the APC, we have Peter Obi in the Labour Party, and Kwankwaso in the NNPP.

“Take Tinubu, he’s been telling us that he’s the one who built Lagos. He has been lying. How can we allow a liar to lead us? What has APC led by Tinubu done to the country? There’s also the issue of age. We all know age is a limiting factor too.”

Mr Delta said, “I know that all the candidates have made promises but the only two people I can count on to fulfill their promises are Peter Obi and Rabiu Musa Kwankwaso.

“For him to have said so makes him unfit to rule this country. Who is he representing?

“Why should we allow APC to continue ruling Nigeria while we have been seeing poor results? Nothing has improved in Nigeria? Shouldn’t we go and look for somebody new?

“There’s currently a report that 137 million Nigerians are living in poverty in Nigeria. What has the government done about that? It has always been the same story.

“I will support Obi not because he’s Igbo but because I believe he has the capacity to do what’s right.”

Mr Activist Law said, “The simple thing is, where are we right now, and where are we going? We should also ask that have we been better or worse with this government? If we are not better, then we have no business with them.

For Tinubu, he’s the presidential candidate and national leader of the APC. We should therefore ask; what has APC done in terms of security? There’s no security everywhere in Nigeria including the FCT.

“But look at Obi and let’s take the peculiarities of his government in Anambra. Even the IGP has said that Anambra is one of the safest places in Nigeria.

“So we should go for those who have shown us what they are capable of doing when elected, and not people who have already failed.”

Muhammad Sani said, “Speaking on the promises of the presidential candidates on insecurity, these people have been lying to us. We can’t trust them. Atiku and Tinubu were in the administration, yet they have done nothing. So how do you think these people can do something when they get to power?

“Whether we go for Atiku or Tinubu or Peter Obi or Kwankwaso, they are all the same. The only time things can change is when these people are dead, in my opinion.

“But as long as they’re alive, nothing can change. They are the political godfathers of the country and they control everything.”

Comrade Baticide said, “When it comes to insecurity, I think the presidential candidates can just express their thoughts because there are important intelligence reports they don’t have access to.

“So when they get into office, they will see the reality. Their approach may completely change.

“That being said, what will matter is the character of these candidates. Is it someone who said Emi lo kan? Is it the person who said we should vote from a certain tribe and not from another?

“So talking about character, we must look at their past. What did they do when they were in power? How did they control state resources?

“But you can’t vote for candidates with so many controversies surrounding them. I’m not going to mention names.

“So on insecurity, the person I can go for is the person we know very well, whose real name and real age we know; those who we know the schools they attended.”

Most of the speakers stressed that the right candidates Nigerians should elect are those who demonstrated their capacity and track records while in government.

A number of speakers also expressed the need for the next president to provide better job opportunities and create workable means of fighting poverty, which they stated are the major causes of insecurity in the country.

This report and the Twitter Space Discussion on 2023 Elections and Security in Nigeria was done in collaboration with the Centre for Democracy and Development and the Foreign and Commonwealth Office. The views expressed are not the position of CDD or Media Trust.