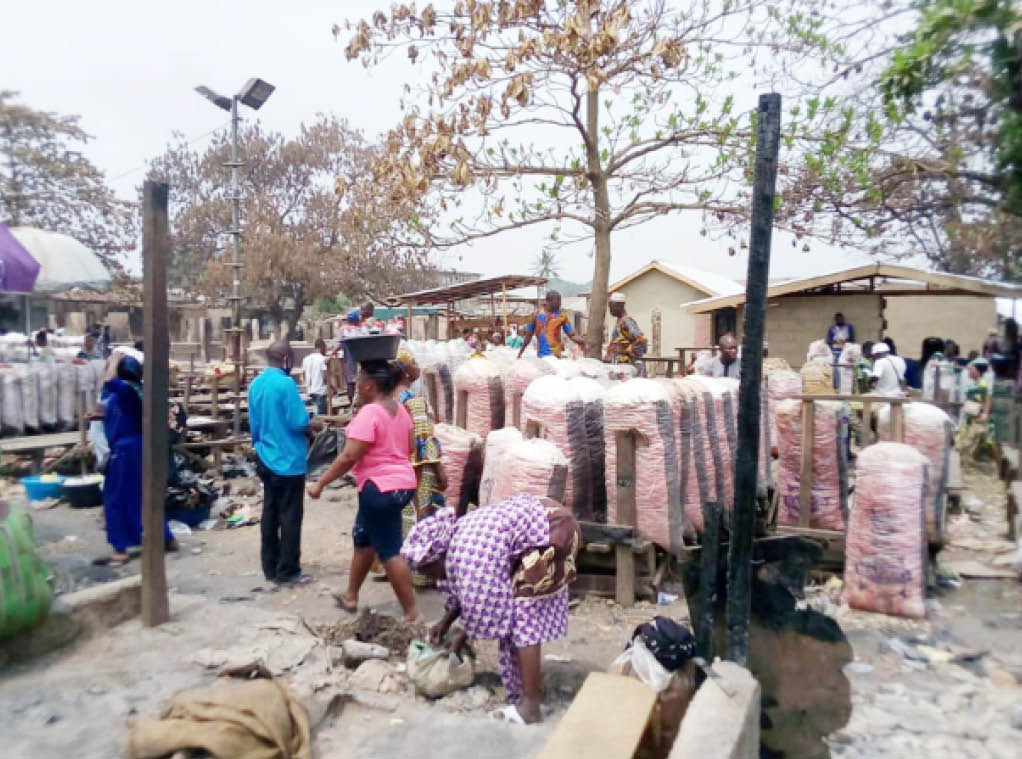 Return of traders to Shasa market on Thursday

Nigerians have continued to groan under the soaring food prices in the country, a situation that has created hard choices for many.

Daily Trust Saturday observed that even cassava flake, popularly known as garri, which was considered food for low income earners, is now expensive and cannot be afforded by many.

In Lagos, a small paint bucket measure of garri costs N1,200, the same measure of the brown beans known as oloyin, sells at N3,000, while the cost of iron beans is between N2,500 and N2,800, depending on the market and seller.

Many families can no longer afford daily three-square meals because they cannot afford to do so.

A vulcaniser, Mr Shamsudeen Yekini, told Daily Trust on Sunday that his four children, aged 10, 13, 15 and 17, only get breakfast and dinner, adding that feeding alone gulps over 80 per cent of his income, yet he cannot afford to feed them three times in a day.

Also, many retailers can no longer afford to buy on a large scale due to the high cost of food items.

A trader who gave her name as Mrs Evboifo said that because of harsh economy more people now buy food items on credit, and their income cannot sustain them.

“In fact, there are people we have stopped selling items on credit to because they don’t have the means to pay back.

“Some customers who bought food items in large quantities before now buy in small quantities because of inflation. It is more painful that as prices keep soaring, the quality of food items like spaghetti, macaroni and tin tomatoes, among others, has reduced,” she said.

Our correspondent also gathered that the age-long saying that Owerri is a centre of enjoyment is being eroded by the harsh economic situation, making residents adjust to the realities of the time.

The hospitality industry is one of the worst hit sectors as hotels record very low patronage. Some of them have been forced to either close or cut down on some of their services, such as putting on their generators from 7pm to 1am.

A receptionist in one of the surviving hotels in Owerri told our correspondent that business has been on the downward trend in the past months.

The receptionist, who identified himself as Emeka, said the hotel, which has 50 rooms, hardly had five booked rooms in a day.

He said, “In normal situations, on weekends lodgers would struggle for spaces, but now, we can hardly have five booked rooms. If we have 10 we take it as a rainy day.”

Our correspondent also carried out a survey at many eateries and restaurants where residents savour the famous ‘Ofe Owerri.’

Some of the operators lamented hard times, as they have been forced to reduce the amount of food they cook as a result of low patronage.

Patricia Ike, who operates a restaurant at New Owerri, said she used to cook at least a half bag of rice daily, with other delicacies, but she had been forced to reduce the quantity to less than a quarter.

Families are also being forced to change their eating habits.

Mrs Gloria Okpe said her family of five had decided to limit the number of times they eat to two.

She said, “What we do is to make sure we have breakfast late morning, which would carry us to the evening. Even at that, the evening meal is very frugal.

“We no longer buy in bulk as we used to; we just buy as our money can afford.”

A market survey conducted by our correspondent at Relief and Cluster markets revealed the soaring prices of foodstuff.

In Oyo State, many residents have embraced the use of charcoal for cooking instead of gas and kerosene.

A civil servant in the state, Mr Jones Adeoye, told Daily Trust Saturday that the economic hardship forced him to move from town to a suburb where food is cheaper.

“My salary is less than N50,000 and I have three children and a wife. How do I survive with house rent and feeding? I completed a room in my village and took my family there. I only go home twice a week. I sleep in the office many times.

“We don’t buy kerosene again, and our gas has been abandoned. We use charcoal and firewood to cook.

“As a Nigerian, I cannot be proud of this country at the moment. We are back in the era of Abacha; that is the truth. Another reason we moved to the village is that we can farm, even if it is in little way,” he lamented.

A mother of three, Temitope Adetayo, told Daily Trust Saturday that relatively, every home in her area has started using charcoal to cook.

She said the economic hardship had forced many residents to use sawdust, charcoal and firewood to prepare food.

She said some of her neighbours and family friends were recently ejected from their rented apartments over failure to pay their house rents.

“My dear, the issue of hardship is becoming unbearable for many of us. I have told my children not to cook beans with gas again, but for how long can we continue with this? I have charcoal and firewood in the compound for cooking.

“Some of our family friends were recently ejected from their apartments. Government must arrest this situation before many people begin to die of hunger,” she said.

A foodstuff trader in Orita Merin market in Ibadan, Oyo State, Mrs Mojisola Ogundeji, said traders were not making profits as they did in the past despite the high cost of things.

She lamented that the cost of transportation from the farm to the city, coupled with the high cost of living, was responsible for the frustration.

“I can only appeal to the government to do something about all the challenges we are facing. We have not seen anything yet because there is no improvement. As for us, we can only see what we buy. It is not our fault. We made more money when things were not this tough.

“I didn’t have formal education and I wish I could give the best to my children, but I have decided to withdraw them from private to a public school because we cannot afford the former. One of them was paying N35,000 before, and the letter they sent to us before vacation was N65,000. We can’t blame the owner of the school, and that is the reason we had to withdraw them from private to public school,” she said.

The chairman of the All Farmers Association in the state, Elder John Olateru, blamed the cost of foodstuff on high cost of input.

Olateru, however, said the weather had encouraged farmers to move to farm when compared to the past few years, adding that they were in the business to make money.

The chief executive officer of the Centre for the Promotion of Private Enterprise (CPPE), Dr Muda Yusuf, said the spiraling inflation had grave implications for social, economic and political stability.

According to the economist, intense inflationary pressures aggravate poverty, elevate social tension and could snowball into social unrest if not quickly addressed.

“With such a scenario, economic and political stability could be at risk,” he added.

He also said the situation was particularly worrisome because even staple foods were no longer affordable by majority of the citizens. He described the situation as an emergency.

While calling on policy makers to think out of the box to douse the current social tension driven by spiking prices, he maintained that the situation must not be allowed to linger.

He, therefore, called for urgent engagement with stakeholders in agriculture, including food crop and poultry farmers, investors in fisheries, agro-allied industries, especially those in the production of staples, with a view to coming up with strategies for quick wins that could urgently decelerate inflation, especially food prices.

He also recommended that manufacturers of essential foods and pharmaceuticals should be granted temporary import duty waivers, while all forms of levies should be suspended.

He added that importation of rice paddy should be temporarily liberalised to complement current domestic production and boost domestic rice processing capacity.

He further noted that urgent reform of foreign exchange policy was imperative to boost investors’ confidence and attract foreign exchange inflows into the economy. This, according to him, will moderate current depreciation and volatilities in the forex market.

He stressed the need for the government to take extraordinary measures to tackle insecurity so that farmers could go back to their farms.

“Also, the problem of oil theft and the attacks on installations should be firmly dealt with. This would enhance oil production and boost our foreign exchange earnings,” he said.