Showmax, an online movie streaming platform, has showcased its first original Nigerian series titled,”Diiche”, to be premiered on September 29. The media screening of the… 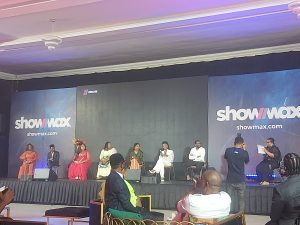 Casts of “Diiche”, Showmax original Nigerian series, during a media screening of the series on Tuesday, in Lagos

Showmax, an online movie streaming platform, has showcased its first original Nigerian series titled,”Diiche”, to be premiered on September 29.

The media screening of the series was held in Lagos on Tuesday, with the attendance of some of the creative industry’s big wigs, actors and some of the evicted housemates of the ongoing television reality show, Big Brother Naija, season 7.

Diiche is a psychological thriller, which promotes the use of indigenous language and pays allusion to the ancient African culture of divinity.

Diiche was coined from the word “Odiiche”, which means “Different” in the Igbo language.

The role of Diiche was played by an A-list actress, Uzoamaka Onuoha.

Diiche becomes a prime suspect in a high-profile murder investigation over the death of Nnamdi, her fiancé. She must take it upon herself and rise against the clock to find out who killed her fiancé and exonerate herself.

However, there is more to the case than meets the eye and a backstory of almost 30 years, known only to her mother, which revealed the tussle between good and evil.

Dr Busola Tejumola, Executive Head of Content and West Africa Channels, MultiChoice, acknowledged the cast and crew of Diiche, saying it was an interesting journey producing the series.

“In the series, you will laugh, cry, be upset, surprised and shocked.

“The series will premiere on showmax on September 29, we want you all to subscribe on showmax and watch,” she said.

The lead actor, Onuoha, said, “I enjoyed a lot of help from the crew and cast of Diiche, they were always there.

“Working with James, the executive director of the series, was like working with a partner and not a boss, when he is losing his mind, he would still be himself, and everyone was looking up to him, it was epic,” she said.

Actress Gloria Anozie-Young, who acted as Nnamdi’s mother, said this was the first time she would be featured in a production where she had to speak the Igbo language.

She said she found it intriguing and interesting. (NAN)