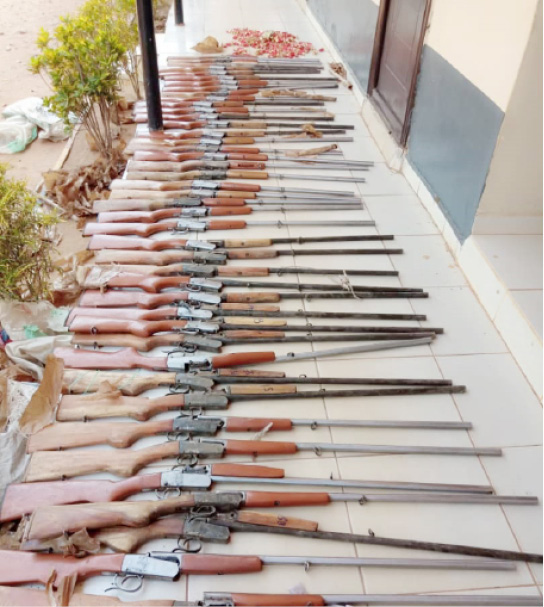 Arms and ammunition recovered from three suspected gunrunner by troops of 1 Division Nigeria Army under Operation Whirl Punch in Niger State on Tuesday.

Wed, 19 Feb 2020 15:42:29 WAT
Senate seeks establishment of agency against arms proliferation
By Abdullateef Salau
A bill seeking the establishment of the Nigeria National Commission against the Proliferation of Small Arms and Light Weapons passed second reading in the Senate on Wednesday.
The bill, sponsored by Senator Mart Adeyemi (APC, Kogi West) seeks to put in place, necessary machinery for the successful prosecution of the campaign to combat illegal arms importation.
It aims to recommend possible ways to monitor, control and mitigate the illegal activities of criminals.
The bill also seeks to identify promoters and users of small arms and light weapons and reasons for their illegal activities.
Senator Adeyemi, in his lead debate, expressed worries over the amount of small arms and light weapons  in the hands of non-state actors, who used them to destabilise the country.
He said there was a correlation between the proliferation of small arms and light weapons and the escalating insecurity in the country.
If passed, Adeyemi said the bill would significantly control arms proliferation in Nigeria.
Ibrahim Gobir (Sokoto East) said aside the illegal importation of arms through the land borders, activities of some local manufacturers were further compounding the situation, while calling  on . security agencies to “rise to the challenge”.
Emmanuel Bwacha (Taraba South) said the country’s borders are porous and smugglers flood border communities with arms. The government, he said, should be serious in controlling arms if it truly desires to address insecurity.
Senator Francis Fadahunsi (Osun East) said the proliferation of small arms was as a result of huge demand by the unemployed youths, some of whom are readily available for crime.
However, Senator Stella Oduah (Anambra North), said the bill should be stepped down pending the outcome of the ad-hoc committee on overhauling the security architecture.
Senator Ahmad Baba Kaita (Katsina North) said since the bill seeks to address the problems of arms proliferation, many of which were imported from the neighbouring countries, the Nigerian delegate to the ECOWAS parliament should sponsor the bill to get other West African countries on board.
Senate President Ahmad Lawan referred the bill to the Committee on National Security and Intelligence for further legislative action and asked it to report back in four weeks.