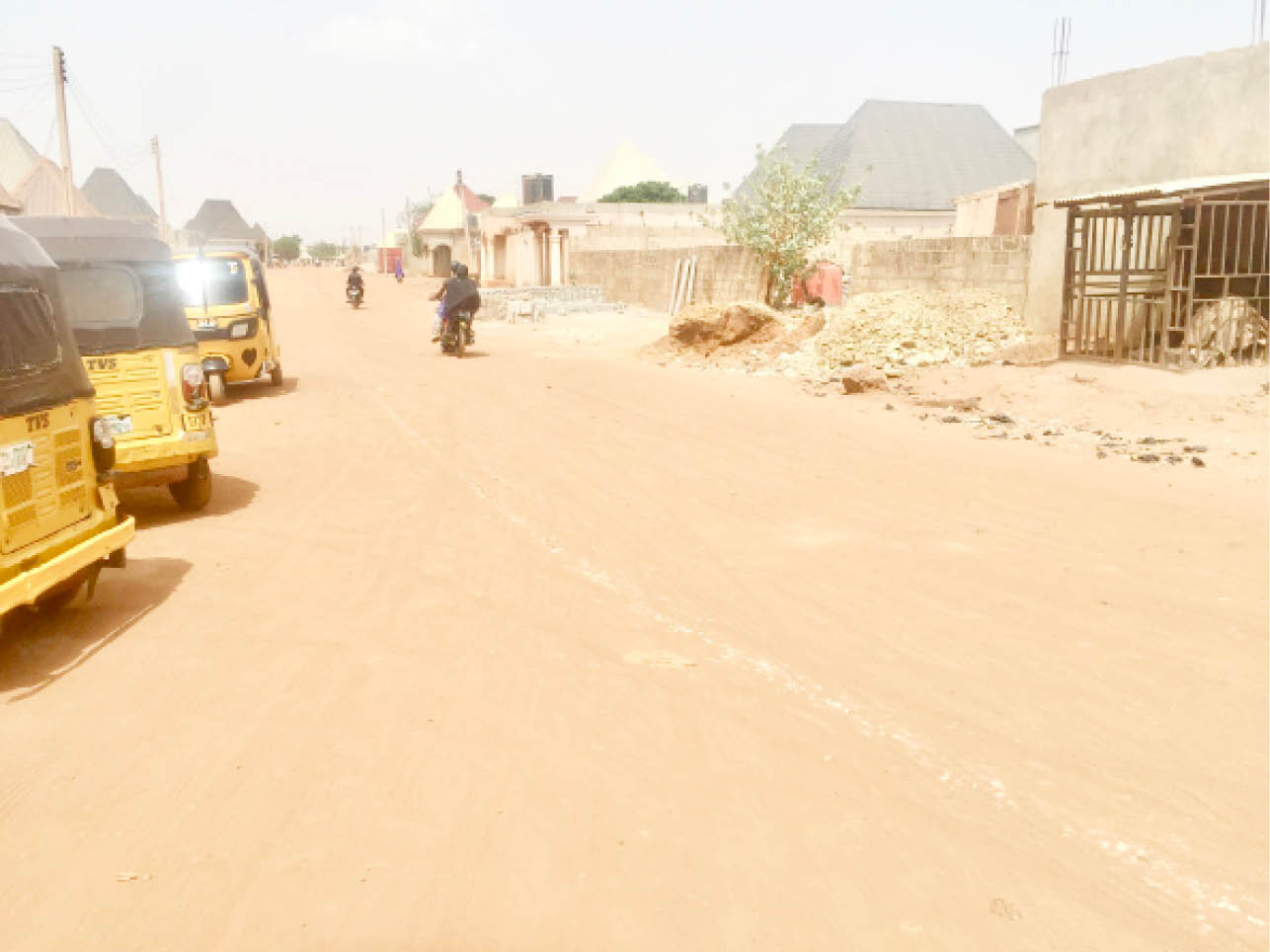 The entrance of the abandoned 1KM road to Nasarawa-Manna Community, Sokoto South

Olu Maifachi sits on a mat, meters away from his vulcanising shop and stares at the distance as his working equipment floats in a pool of water that had occupied his shop. It’s been hours since the community witnessed a heavy downpour and shop owners like Maifachi would have to wait a long time for the water to recede before they can resume work.

The 55-year-old’s shop is a few meters away from the edge, where a tall signpost stands as evidence of a road construction contract that appears to have since been abandoned at the eastern by-pass of Manna-Babba community in Sokoto South Local Government Area.

“I have been waiting here for over five hours, expecting the flood that has occupied my shop to dry up so I can continue my work,” the vulcaniser told our correspondent while pausing to chew a piece of kola-nut as he asked an apprentice to pass a deflated tyre to him.

Maifachi lamented how several customers had boycotted his shop due to the poor condition of his location. He also said the location had turned into a harbour for criminals, who attack passersby, injure and snatch their motorcycles at night.

It is the same sad story for Abubakar Abubakar, who owns a provision shop at the centre of Manna-Babba Street. The 43-year-old said his wares often submerged after heavy downpours. He explained that during the dry season, the wind blows dust into his shop, which often caused damage to some of his materials.

Thirty kilometres from the Manna-Babba community, 41-year-old Muhammad Bello laments that his rice, sugarcane, onions and beans farm were on the verge of ruin. The farmer, who lives and farms in the Nasarawa community of Sokoto South Local Government Area, said he had been experiencing low yield lately.

Narrating how his customers now pay him less and blame it on the bad road that makes it difficult to access his location, Bello explained that middlemen were buying his crops at lower prices compared to farmers in other communities.

“They usually complain that it is because they pay higher transport to reach my farm,” he said.

For Maifachi, Abubakar, Bello and other residents of the affected communities, the abandoned roads have been a source of concern since 2019. It was gathered that a 1km road with drainage from the eastern bypass to Manna-Babba and another 1km road with culverts and drainages to Nasarawa-Manna community, both in Sokoto South Local Government Area, though awarded and funds released, had remained unexecuted since 2019.

How the projects were initiated

Findings show that in the 2019, National Assembly Zonal Intervention Project, otherwise known as constituency projects, a former lawmaker of the All Progressives Congress (APC), who represented Sokoto North/South federal constituency between 2015 and 2019, Hassan Bala Abubakar, had nominated a 1km road with drainage from the eastern bypass to the Manna-Babba community and the construction of another 1km road with culverts and drainages to Nasarawa, popularly known as the Nasarawa-Manna community.

Investigation further shows that as captured in the 2019 appropriation and contained in the North West geopolitical zone mapping of capital projects by the National Assembly Budget and Research Office (NABRO), a total sum of N28million was budgeted for the projects at N15million and N13million respectively.

But a source from the Sokoto Rima River Basin Development Authority (SRRBDA), the contract supervising agency, confided in Daily Trust on Sunday that the 1km road to Manna-Babba community was awarded to Bubak Continental Nigeria Limited with an adjusted amount of N10.8million. A document made available to our correspondent showed that the sum of N6.5million was released in 2019 as the cost for the project.

The document also indicates that the other 1km road with culverts and drainages to Nasarawa-Manna was awarded to a firm; Starazagora Nigeria Limited in Lagos. Although the sum of N15m was budgeted for the contract, N7.5m was said to have been released to the contractor.

The SRRBDA could not officially confirm the status of both projects, but a document received from an insider within the agency indicated that the two projects had been completed. However, an on-the-spot assessment by Daily Trust on Sunday showed that no sign of work had been done other than the placement of signposts at the locations.

Almost four years after the roads were included in the ZIP project, residents of the two communities said they had continued to experience recurring losses due to the alleged failure of the contractors to execute the projects.

When our correspondent visited the 1km eastern bypass to Manna-Babba and the one to Nasarawa community, it was discovered that no work had been done. On both locations, only signposts bearing the projects’ titles and names of the contracting companies were standing.

Bello Muhammad Dikko, the community leader of Nasarawa-Manna, said that sometime in 2019 or 2020, some people told him that they wanted to construct a one-kilometre road from the bybass to the community.

“They gave me a form to sign, and since then, they haven’t returned to do anything,” he said.

He said when the poor state of the road became unbearable for his people he reached out to the former lawmaker, but nothing was done about it.

Also speaking, the community leader of Manna-Babba, Muhammadu Bello, said he was not aware of the project, but complained that the poor state of the road had affected his community negatively.

Efforts to speak with the managing director of the SRRBDA, Bature Mohammed, were unsuccessful. However, Alhaji Chika Mayana, one of the executive directors at the SRRBD, told our correspondent that the agency’s law does not permit the revelation of information to anybody, including journalists.

In 2019, Hassan Bala Abubakar was re-elected to represent Sokoto north/south federal constituency under the APC, but his election was challenged by Abubakar Abdullahi Ahmed of the Peoples Democratic Party (PDP). By October 2019, the Court of Appeal, Sokoto division, had sacked Abubakar and ordered a rerun, which the Independent National Electoral Commission (INEC) conducted on January 25, 2020 and Abubakar Abdullahi Ahmed of the PDP was declared winner.

Abubakar, now a former lawmaker, confirmed that he nominated the two projects in the 2019 ZIP budget, but said he had handed both projects to the present lawmaker.

However, on June 13, 2022, the incumbent lawmaker, Ahmed denied the claim, stating that he (Hassan Bala Abubakar) had handled all the 2019 ZIP. Curiously, when he discovered that our correspondent had him on record, he asked that the conversation be deleted, insisting that his permission was not sought.

Ahmed said, “I entered office later in 2020 after the rerun election and began with the zonal intervention projects nominated by me in 2020. So, he (past lawmaker) should be the one to answer questions on the abandoned road projects.”

On June 30, after a Freedom of Information (FOI) request was submitted to the SRRBDA, one of the members of staff called to request that our correspondent resubmit another request containing an official address.

In July, another FOI request was submitted with an office address. However, after the expiration of seven days as stated by the law, there was no response from the agency. A reminder sent to the agency was equally ignored.

Who are the contractors?

In the 1km road at Nasarawa-Manna community in Sokoto South Local Government Area, the billboard indicated the contractor’s details as Messi’s Starizagora Nigeria Limited, No. 71 Kwame Nkrumah Crescent, Asokoro, Abuja. But according to a document received from a source in the agency, the address is 8, Bedwell Road, Ikoyi, Lagos. When the company’s name was searched on the website of the Corporate Affairs Commission (CAC), it couldn’t be found.

For the abandoned 1km road to Manna-Babba, its billboard gave details of the contractor as Bubak Continental Nigeria Limited but was found in the CAC database as inactive. This means that it has unmet obligations to the government. The CAC describes an inactive firm as one that has not filed its annual returns up-to-date.

Our investigation reveals that the CAC incorporated Bubak Continental Nigeria Limited on August 5, 1991 with registration number, RC-169517. Details show that the firm was registered as a private unlimited company, with its head office in Minna, Niger State.

Bubak Continental Nigeria Ltd, with an office address at Plot 177 P.O. Box Minna, Niger State, could not be traced. A visit by our correspondent, who spoke with residents around the indicated location in Minna, confirmed that the address was invalid. Similarly, a visit to the Ministry of Works, Minna, to ascertain the existence of the company in the state proved the contrary as officials said they never heard of the company’s name.

However, Nigeria24, the outlet that provides information on registered companies in Nigeria, indicated in its database that one of the directors of Bubak Intercontinental is Hassan A. Abubakar, who is believed to be the ex-lawmaker representing Sokoto north/south federal constituency. Other names listed as directors include Umaru M. Abubakar, who is said to be the biological son of the ex-lawmaker, and Mahmod. M. Abubakar bearing the same surname.

When contacted over his alleged link to the company, Hassan Bala Abubakar failed to either answer repeated calls nor respond to several text messages.

Similarly, an attempt to locate Starazagora Nigeria Limited at No. 8B, Bedwell Road, Ikoyi, Lagos, was unsuccessful. Although Bedwell Road was identified, the company’s address could not be traced.

A civil and criminal litigation lawyer, Doyinmola Ogundokun, stressed that awarding contracts to companies that don’t exist is illegal and a contravention of section 57 (2) of the 2017 Public Procurement Act.

According to Ogundokun, public officials are also prohibited from engaging in, or awarding contracts under Sections 57 and 58 of the Public Procurement Act, 2017 in order to promote openness, fairness and accountability, and to prevent undue intervention in the procurement process.

Section 57(9) states, “Every public officer involved directly or indirectly in the matters of public procurement and disposal of assets shall divest himself of any interest or relationship, which are potentially inimical or detrimental to the best interest of the government.”

The lawyer added that though the law doesn’t specifically point out the offence of an agency like the SRRBDA for awarding contracts to a company that doesn’t exist, he stressed that if a company doesn’t exit, it means that documents submitted by the bidders are fake, and therefore, against the public procurement law.

He said the agency’s offence could be traced to section 58 (4c), which states, “The following shall also constitute offences under this act directly, indirectly, or attempting to influence in any manner. The procurement process to obtain an unfair advantage in the award of procurement contracts is against using fake documents.”

Furthermore, the act provides punishment for the agency in section 58 (5) thus: “A person who by carrying out his duty as an officer of the bureau or any procuring entity contravenes any provision of this act, commits an offence liable on conviction to the cumulative punishment of a term of imprisonment of not less than five years without the option of fine.”

This report is supported by John D. and Catherine T. MacArthur Foundation and the International Centre for Investigative Reporting (ICIR).