As the Eid-el-Kabir festival inches closer, Muslim faithful are grumbling over the high cost of rams. Even though many of those who are used to… 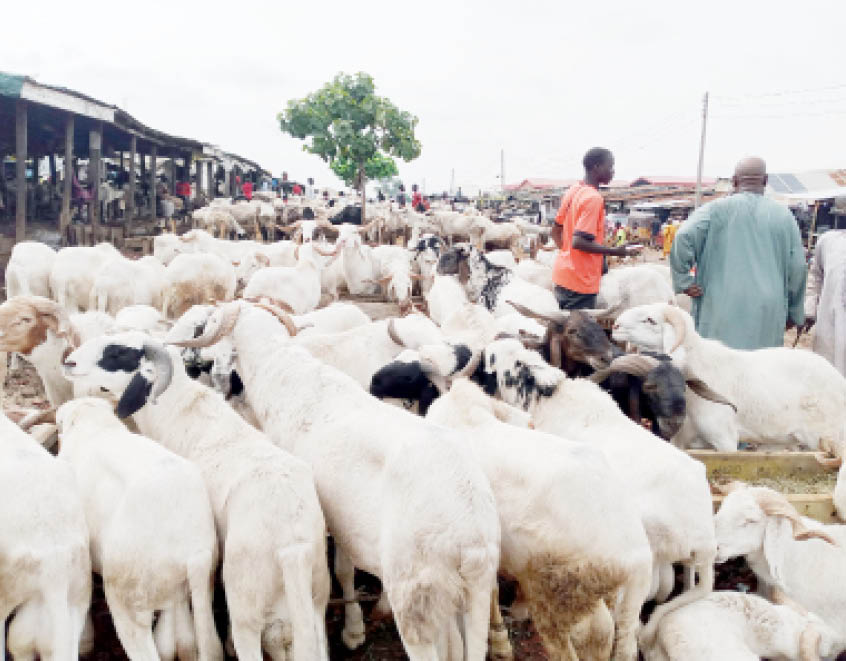 A section at Dei-Dei live stock market in Abuja

As the Eid-el-Kabir festival inches closer, Muslim faithful are grumbling over the high cost of rams.

Even though many of those who are used to slaughtering animals to commemorate the season are still hopeful of buying the sacrificial animal,  some of them said their poor economic status amid rising inflation are threatening to mar this year’s celebration.

Daily Trust Saturday reports that Eid-el-Kabir or Eid-el-Adha is celebrated annually by Muslims all over the world through the slaughtering of animals to honour Prophet Ibrahim’s willingness to sacrifice his beloved son, Ishmael, as commanded by Allah. This year’s celebration is expected to hold on Saturday, July 9.

Sheep, goat, cow or camel are also allowed to be used for the sacrifice even though many people prefer to use ram because of the enormous reward it attracts from Allah.

Our reporters across the states observed that the prices of rams have shot up to between 70 and 100 per cent in most parts of the country.

In Kaduna State, traders have taken over major animal markets as well as neighbourhood spots to display various rams in shapes and sizes, even though they claim there are few buyers, barely one week to this year’s festival.

At the popular Zango animal market in Tudun Wada, Kaduna metropolis, one of the ram sellers known as Malam Sunusi Usman said the animals were available but buyers were not forthcoming. He added that the prices ranged between N50,000 for medium sizes and N400,000 for very large rams.

He attributed the cost of the rams to transportation, especially diesel, which is used to power trucks that transport the animals to the market.

At a Kurmin Mashi neighbourhood ram spot, Ibrahim Aliyu said several customers had been visiting to price the rams but only few bought.

“We understand that it is a difficult year and many people are accusing us of hiking the prices of rams, but they have to understand that it is not our fault. Is there anything that has not gone up in Nigeria today? Even those who rear the animals at home will tell you that the price of feeding them is high, so people should bear with us,” he said.

Hajiya Halima Sani, a resident of Kaduna, said that having visited several roadside ram vendors, she discovered that the least prices were between N60,000 and N75,000.

On his part, Malam Aliyu Suleiman from Zaria said he may not be able to slaughter ram this year due to economic hardship.

“Things are very expensive this year. As at now, all I am thinking of is how to feed my family on Eid day; if I get some chickens to buy, that will be okay for me,” he said.

In Borno State, ram sellers in Maiduguri decried lack of patronage and poor sales amidst the high cost of the rams during the Sallah holidays.

The relative peace witnessed recently in Borno State and the state government’s reopening of the Maiduguri-Gamboru-Ngala road has prompted dozens of ram dealers and sellers to travel to neighbouring countries like Chad and Cameroon to buy Sallah rams to sell in Maiduguri.

Our correspondent who visited three different ram markets within Maiduguri observed a huge number of rams, but the traders were kept in suspense and fear due to poor sales. Different ram selling points have also sprung up in various locations within the metropolis.

Another seller at the Bypass ram market, Usman Lawan, also decried poor patronage as a result of the high cost of the animals. He attributed this to the rising inflation and poor economic situation of people in the state.

A buyer, Bakari Mohammed, lamented that he could not buy a medium-sized ram. He said, “I came here to buy a medium-sized ram to celebrate Sallah but the price has skyrocketed beyond my limit. The one I brought at N50,000 last year is now almost N100,000. But I will exercise patience and see if the prices would reduce towards the eve of the festivity.”

The situation is not different at the markets visited by Daily Trust Saturday in Kano as residents were disenchanted over the rising prices of rams. Buyers lamented that it had become extremely difficult to procure rams for Sallah celebration.

Tasi’u Musa, a father of four, said he could not afford any animal for the celebration as he was still struggling to feed his family. He said he had decided to join other less privileged neighbours to buy a cow or camel and share, which he also said were beyond the reach of the poor.

However, Shu’aibu Gambo, who bought two big rams at the popular Yan Awaki market in the Unguwa Uku area, said it was possible because he started saving for the past year.

The public relations officer of Yan’Awaki Animals Market, Umar Ado Kwari, said there’s no type and size of animal one would not find in the market.

“People are buying despite the high cost because there are affordable ones that meet the needs of everybody,” he said.

In the Federal Capital Territory (FCT), our reporter observed a lull in trading activities around livestock major markets, including Dei Dei and Madalla.

A ram trader, Yau Ahmed, said the low supply and patronage were different from the situation last year when animals took over spaces for rams in the markets.

Some of the traders attributed the situation to the spate of insecurity in the North West, which has led to the displacement of many farmers and herdsmen in various communities.

He also attributed the situation to the high cost of transportation, resulting from the current price of diesel, which has doubled, compared to what obtained last year. He said the situation led many livestock traders to stay off the business, while others made adjustments.

A ram buyer, Kamaruddeen Adelaja, said he was shocked by the upward change in the prices of rams, adding, “I intended to buy only one but I have to settle for a smaller size from what I initially wanted.”

Iwobi Ifeanyi, a Christian who was seen at Kubwa makeshift ram market, said she intended to buy up to 10 rams and distribute to some friends and associates as she did every year, but lamented, “I am shocked by the turn of events; the prices are very high, even when they appear to be small. I have spent three hours but yet to decide what to do,” she said.

Muslim faithful in Lagos, Edo, Imo and other parts of southern Nigeria, are also lamenting the high cost of rams, which they said was beyond the reach of the people.

It was the same thing at Obinze cattle market, Imo State, where our correspondent observed that a middle-sized ram goes for N180,000, while the bigger ones are sold between N250,000 and N300,000.

The price is not different in Lagos and other states as ram sellers bemoaned low patronage despite the risk involved in getting them.

The chairman of Eayen cattle market, Malam Aliko Haruna, told Daily Trust Saturday that he had not been able to make sales since he returned to Benin with his consignment.

“For now, there are no sales; people are not coming. But I believe that when it is few days to Sallah they will patronise us because many people don’t have a place to keep ram, so they would wait till a day or two to Sallah.

He attributed the development to the high cost of living in the country.

The only buyer Daily Trust Saturday met at the market, Mr Abdulaziz Isah, lamented that he budgeted N70,000 for a ram but had gone round the market but couldn’t get one to buy.

“I have moved round the market but my money can’t afford one. I will have to go back home in search of more money,” he said.

One of the traders on rams and cattle in Oke Afa in Isolo, Lagos State, Mr Abiola Hafeez, said he could not travel to the North to purchase rams due to insecurity; he rather went to Saki in Oyo State to buy.

He said some of his colleagues who travelled to Zamfara barely escaped alive when bandits attacked the town they travelled to.

“Only the brave can travel now to purchase animals, not just anybody,” he added.

Mr Kazeem Temitope, who said he slaughtered ram every year, insisted that he would fulfil the religious injunction this year, regardless of the prices of rams.

He said, “Salah is something many people plan ahead for. I know some who would buy two or three rams every year, but now, they are saying they will only buy one due to the hike in prices. Another person who kills cows has reduced the number he would purchase this year. We all know it is expensive but we have to buy, no matter what.”

Mr Luqman Obanikoro said that as a result of the high cost of rams, he would rather get a smaller one instead of not buying at all.