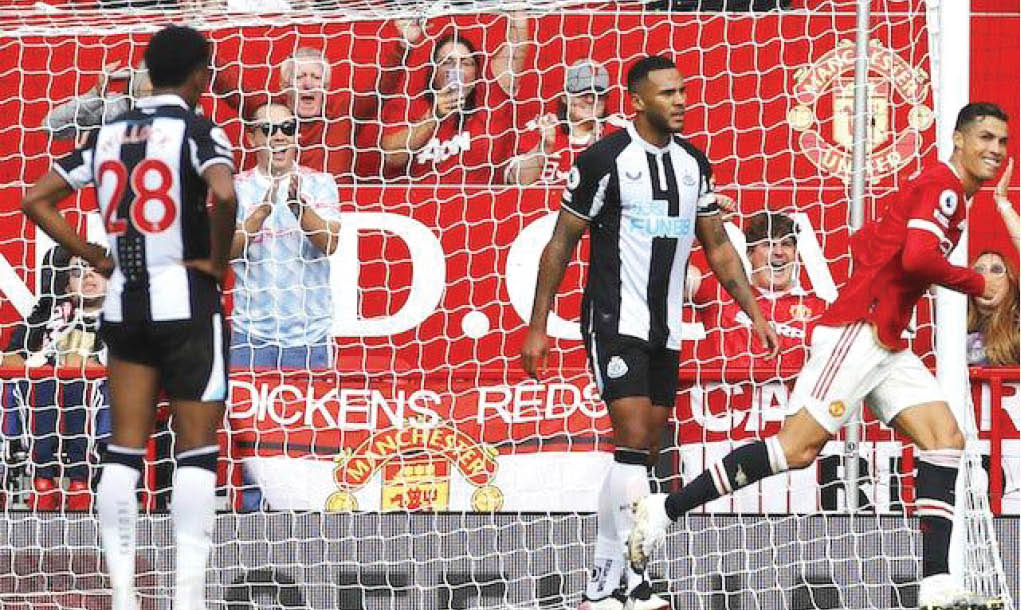 Cristiano Ronaldo’s return to Manchester United lived up to the hype as the five-time Ballon d’Or winner scored twice on his homecoming to Old Trafford in a 4-1 win over Newcastle.

Tottenham’s 3-0 thrashing by Crystal Palace saw their 100 per cent record start to go.

That allowed United to climb the top of the table, but a four-way title race is already brewing with Chelsea, Liverpool and Manchester City already showing the gulf in class between them and the rest of the league.

At the other end of the table, Arsenal are off the bottom thanks to their first win and goal of the season to beat Norwich 1-0.

These are three talking points from the weekend:

Chelsea, Liverpool, Manchester City and Manchester United have finished in the top four for the past two seasons and only look to have pulled further clear of the pack with the business they have done in the transfer window.

United’s artillery of attacking talent failed to fire for 45 minutes against Newcastle but still scored four as Ronaldo showed the predatory instincts that have made him one of the greatest goalscorers in the history of the game, before Bruno Fernandes and Jesse Lingard exhibited their ability to get goals from midfield.

Like Ronaldo, Romelu Lukaku has returned to his former club in England from Serie A this summer and showed why Chelsea spent £97 million ($134 million) on the Belgian as his brace turned an unconvincing performance into a routine 3-0 win over Aston Villa.

A prolific centre-forward is arguably what City and Liverpool still lack, but they are the two sides that have dominated English football over the past five years and that continuity is paying off.

City had on paper the toughest fixture of the top four this weekend but came through it with a 1-0 win at Leicester to remain just one point off the top.

Ronaldo’s sensational return mapped out a road to future glory for United rather than a nostalgic trip down memory lane and made them title contenders.

Old Trafford was whipped into a frenzy long before kick-off with choruses of “Viva Ronaldo” ringing around the 74,000 crowd.

With a former manager Alex Ferguson beaming with delight in the stands, United fans could be forgiven for thinking the glory days when Ronaldo won a Champions League and three Premier League titles were back.

Yet this embarrassment of riches will force manager Ole Gunnar Solskjaer to make tough decisions on which players to start, with internationals Anthony Martial and Lingard benched and Rashford recovering from injury against Newcastle.

Arsenal eased the pressure on under-fire manager Mikel Arteta but laboured to take all three points against a Norwich team looking for their first point of the season.

The Gunners had entered the international break in crisis after losing their first three games without scoring a goal – the club’s worst start to a league campaign in 67 years.

Arsenal peppered visiting goalkeeper Tim Krul’s goal with 30 shots – their highest number since the start of last season – but struggled to break the deadlock.

Despite spending almost £150 million on new signings, it was a familiar face – captain Pierre-Emerick Aubameyang – who got them out of jail.

The Gabon international answered Arteta’s call for senior players to “drive the process” of recovery, but Arsenal will need to show greater ruthlessness to improve on last season’s disappointing eighth-place finish and silence Arteta’s doubters. (AFP)