From Aminu A. Naganye & Zaharaddeen Y. Shuaibu (Kano)   The rising cost of agro-inputs in Nigeria is forcing farmers in Kano to devise innovative… 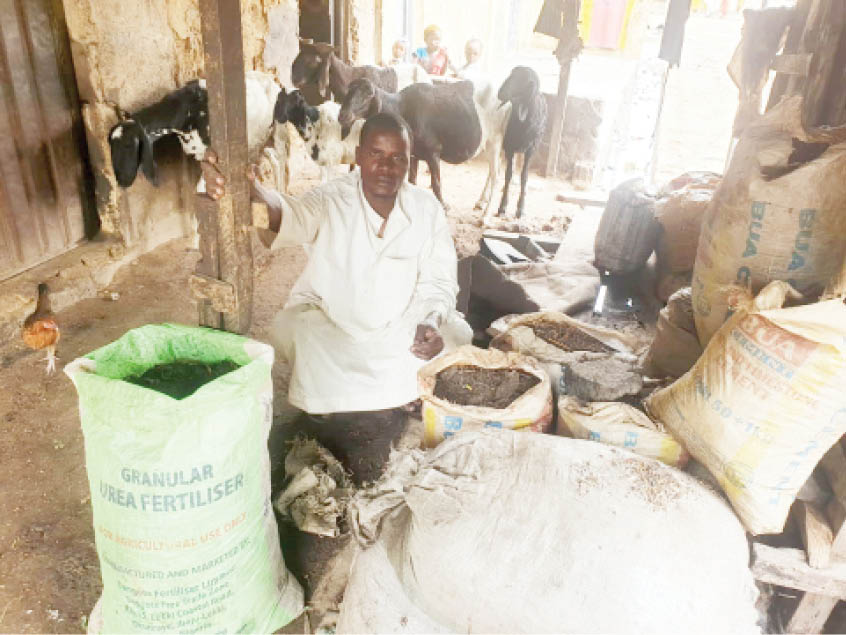 The rising cost of agro-inputs in Nigeria is forcing farmers in Kano to devise innovative means to cope as this year’s rainy season begins in the state, just like most parts of the North.

Daily Trust on Sunday reports that the price of fertiliser has skyrocketed, compared to the previous rainy season.

Consequently, farmers that find fertiliser cost-prohibitive and organic manure unavailable, have resorted to experimenting with novel alternatives, using their old methods, including salt and potash.

But experts warn of its negative long-term effects on the soil.

A farmer in Yatsi village of Bichi Local Government Area, Musa Sa’idu, 32, said although they had been using manure in the past, it had always been as support to fertiliser, but this time around, they had to use it entirely and complement it with salt and potassium.

“This time around, we depend on manure as the only substitute to fertiliser as we can’t afford it. The little we are getting from our farms will not cover the spending if we are to use fertiliser. In fact, we don’t even have the money, but as you know, this affects only the local and small-scale farmers.

“I planted soya beans and sorghum in one farm, and beans and millet in another one, but I had to use manure for all of them.

“Earlier, before planting I was able to gather some animal dung and ash and applied on the farm. And later, I bought potassium, which will be mixed with some little urea. We don’t apply the potassium only, we mix it with urea. But this time around, I saw many farmers that would not even do that; they will only apply potassium to their farms.

“I can’t really differentiate the yields between the two, but we are more certain about fertiliser. So, we know that our grains will grow, but we will wait to see our yields,” he said.

Another farmer, Hassan Sani of Rijiyar Zaki in Ungogo Local Government Area, said the exorbitant price of fertiliser this year made him resort to whatever alternative he came by.

“I have not used them before (salt and potassium), but I am definitely going to use them this year. Someone I trust told me it is working very well when you mix it with a little manure, salt and potash. I have already bought some salt and potash. As soon I get some cash I will buy more because it is cheaper, and they said it was working effectively.

“Fertiliser is no longer for the poor; and for manure, you cannot afford to pay trucks to take it to the farm. If this salt and potash work, I know it is just the mercy of God,” he told Daily Trust on Sunday.

For Munkaila Gamadan, 45, a farmer from Kura Local Government Area, using manure has become necessary in this season as not all of them can afford to buy fertiliser. He said many people had reduced the sizes of their farms as a result of the hike in the price of fertiliser, and manure was also difficult to get.

“I inherited farming from my grandparents and I have spent all my years in it since I grew up. Our parents had used manure for farming, which we also inherited, but gradually, we learned to accept changes and resorted to using fertiliser. But for this season, it has gone high beyond our level; that is why we decided to go back to manure,” he said. But Gamadan said that despite the affordability of manure in terms of price, those that can afford fertiliser still applied it. He said manure was also difficult to get as there is now much demand for it.

“The challenge of manure is that it is difficult to transport to the farm. In a farm where you need two bags of fertiliser, you have to use at least one small truck of manure.

“And manure is also becoming expensive. The only thing we get free is the waste dumped on roads or other places. Even animal dung is for sale.

“Some of us will only rely on manure, but I will apply fertiliser on my rice farm and rely on manure for the remaining ones because I can’t afford to buy fertiliser for all of them. I have millet, sorghum, beans, tomatoes, onions, potatoes and so on,” he  said.

As laudable as the innovative minds of the local farmers may seem, experts have warned that it may be counterproductive in the long run.

Professor Ijasini John Tekwa of the Soil Science Department, Federal University, Wukari, said applying salt as an alternative to fertiliser was akin to adding salt to an injury because sodium is already in abundance in the soil.

He said, “It is not advisable to use salt because most of our arable crops don’t even need it. They should apply manure instead. Farming is now turning organic because it is eco-friendly; it doesn’t deteriorate the environment, and it doesn’t cause havoc to the soil. In fact, if you add cow dung or farmyard manure to the soil, it will not just add the nutrients alone, it also improves the physical condition of the soil.”

Dr Bassam A. Lawan of the Department of Soil Science, Bayero University Kano (BUK), also argued that even if this novel mixture proved effective in the short run, the consequences in the long run would be detrimental to the soil and the farmer, saying, “It will affect the fertility of the soil because it will create an issue of alkalinity in the soil, whereby some of the missing elements that are required by the soil will not be available over time.”

He advocated the use of locally made compost fertiliser.

He advised that, “The best for farmers is to try to make some form of special local fertiliser. For example, the farmers can simply make the manure they normally take to their fields into a compost, which is an organic fertiliser, but the amount of nutrients being released by it is higher than that of normal manure.

“What the farmer needs to do is to cover up that manure as they are keeping it and adding water into it so that it will generate some heat; some level of composition and reaction will take place within the manure as a result of the presence of moisture. Some microorganisms will act on the material, thereby releasing the nutrient elements in a more available form to the plants so that at the end of the day, farmers can take the compost to their field instead of taking it as normal manure. It is environmentally friendly and is devoid of chemicals. It is organic and everyone can benefit.”

A crop expert from the BUK, Dr Aminu Fagge, said although fertiliser also had harmful effects on the plant and environment, too much sodium and potassium would be more harmful. He said the mixture may not give the plant the required nutrients needed in its life cycle.

He also advised the application of organic fertiliser in lieu of this novel alternative.

Similarly, the chairman of the Institute for Dietetics in Nigeria, Kano State chapter, Auwal Musa Umar, contended that restricting plants to sodium and potassium, among many nutrients the soil needs, would create “an imbalance in the soil and affect soil quality.”

He said the farmers may think this is a novel idea but they were wrongly guided.

“It is like herbal concoction to modern medicine. We advise them to use organic manure or fertiliser. All decomposable waste products can be used as organic manure, except nylon,” he said.