Sixteen persons were kidnapped in the community 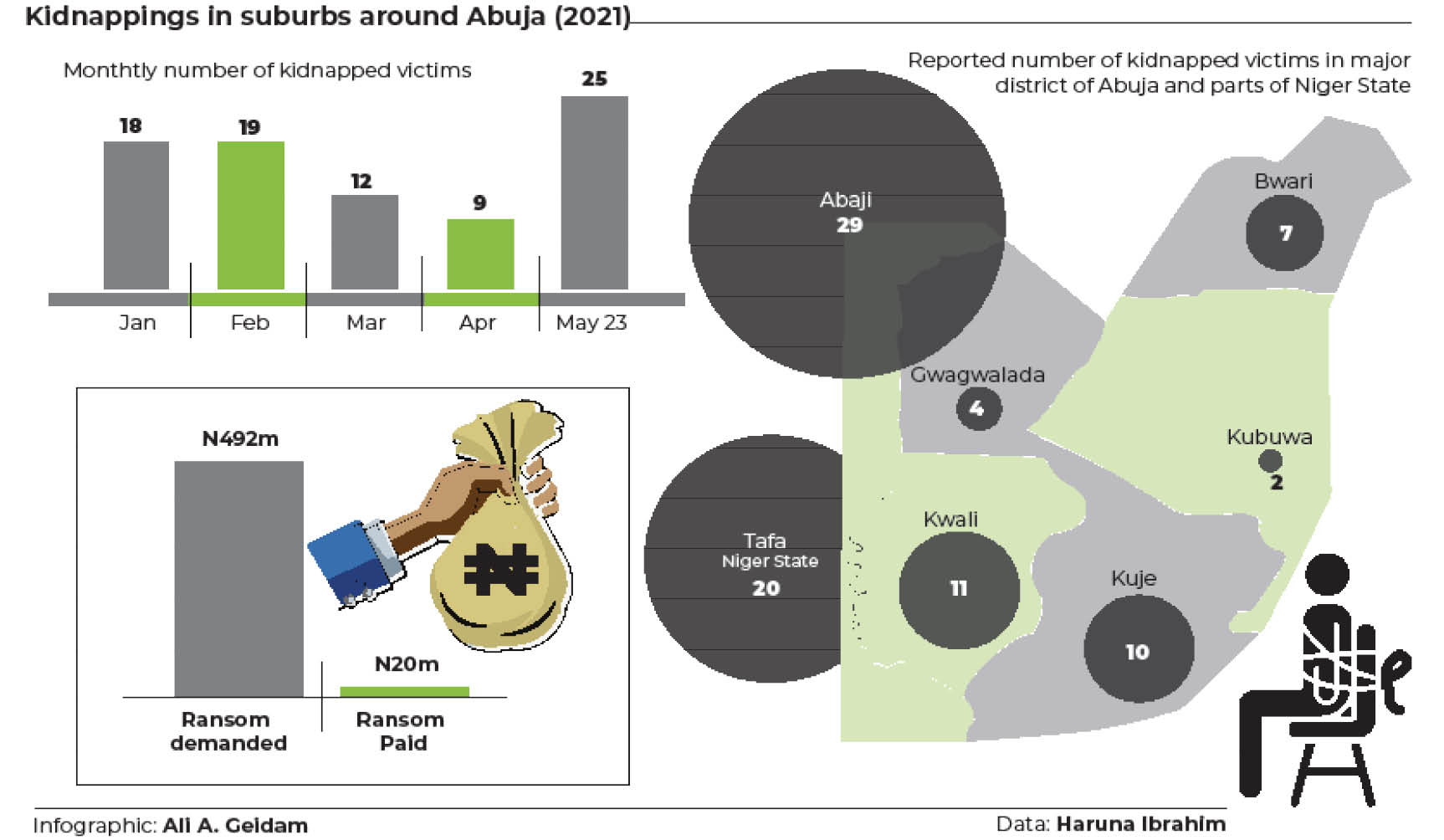 Hundreds of people living in towns and villages around Abuja have relocated to safer locations for fear of being kidnapped by bandits.

Our correspondents report that armed bandits have of recent put many suburbs of the Federal Capital Territory (FCT) on the edge, abducting people and forcing their loved ones to pay millions in ransom.

Also, people living in villages in states close to Abuja like Niger and Nasarawa have also deserted their homes, leaving behind their farms and other sources of livelihood.

The constant raids on these communities on the fringes of the city, which most times lack adequate security presence, have created panic among residents.

Data gleaned by Daily Trust revealed that at least 83 people are reported to have been kidnapped across the FCT from January 1, 2021, to May 23, 2021.

Communities in Abaji, Bwari, Gwagwalada, Kuje and Kwali Area Councils in the FCT have been repeatedly attacked by bandits who kidnapped residents, a development that compelled many to relocate.

Some senior civil servants in Gwagwalada and Kuje who could not relocate to the Federal Capital City (FCC) have engaged the services of vigilantes and private security guards to watch over their homes and their extended family members.

A resident of Anguwar Sarki in Tungan-Maje, Mr Emmanuel Adejumo, who is a civil servant, said he had placed his house for sale so that he will relocate to Gwagwalada metropolis or Zuba because of the incessant attacks by kidnappers.

“In fact, as I am talking right now, I have placed my three- bedroom flat for sale because whenever it is night, I can’t sleep with my family even though I have not fallen victim.  But three of my neighbours have been attacked by armed bandits on three different occasions; so I don’t feel safe,” he said.

A land agent at Anguwar Dabiri in Tungan-Maje, Samuel Ayuba, said the activities of kidnappers in the area had affected both social and economic activities of the people.

He said the majority of people who intended to buy land to build houses in the area had shelved the idea because of fear of being kidnapped, adding that some residents had relocated to Zuba town.

Mr Gabriel Ishaya, a resident of Kiyi community in Kuje, who also spoke with one of our reporters, said that most of the affected victims of abduction had relocated to neighbouring Chukuku community and Kuje town.

He said the recent deadly attacks carried out by the kidnappers in the community for three consecutive times had caused more fear in the residents despite the fact that vigilantes had been patrolling the community.

“In fact, as I am talking to you, I know about 12 households here in Kiyi community that have relocated after they were attacked and abducted by kidnappers,” he said.

A resident of Anguwar Hausawa community in Abaji, Suleiman Danjuma, who said he was abducted twice while his younger brother was also abducted once, said he has abandoned his house with his family and relocated to Abaji metropolis.

He said his travails in the hands of his abductors for one month forced him to relocate with his family due to frequent attack on him and some of his neighbours.

“Most of the houses especially those ones near the stream have been abandoned by their owners because of frequent attack by the kidnappers,” he said.

Also, the management of Veritas University, a private university owned by the Catholic Church located in Bwari Area Council of the Federal Capital Territory had suspended the resumption of students indefinitely over fears of bandits.

Daily Trust recalled that about two weeks ago, the university and some secondary schools in the area had hurriedly shut down over fears of abduction.

The management of the university had at that time claimed it did not shut down because of security concerns but that the students were on a short holiday.

However, a memo signed by the university’s Registrar, Dr Stella Okonkwo,  dated May 29, 2021 titled ‘Reversal of decision to reopen the university’ said reports of a kidnap incidence around Kuchiko axis of Bwari as well as the leaked circular of IGP warning of possible threats in Plateau and Abuja prompted them to shelve the idea of reopening the school.

An FCT stakeholder, Alhaji Dantani Musa, said there was the need for the government to collaborate with traditional rulers across the area councils to find ways of curbing the kidnapping menace.

“Today, if you observe, majority of senior government officials who are mostly from satellite towns can no longer sleep in their houses and go to work again as they have been forced to look for a more secured place in the city or Gwagwalada and Kuje town to stay with their families because of fear of being kidnapped,” he said.

Recently, the Federal Capital Territory (FCT) Police Command in collaboration with the Department of State Security (DSS) and local hunters rescued 14 victims kidnapped at Gauraka area of Niger State during a joint operation at Byhazin-Bwari axis.

The joint operation, according to the police led by the command’s anti-kidnapping squad combed the forests and engaged in a fierce gun duel during which two of the suspected kidnappers were arrested.

Speaking further on what the FCT Police Command was doing to curtail the rising cases of kidnappings in the territory and environs, the spokesperson for the Command, ASP Mariam Yusuf, said, “We have deployed overt and covert strategies to ensure the protection of lives and property of residents within the FCT.

“However, we implore residents to cooperate with the police and other security agencies by reporting promptly all suspicious movements within their vicinities,” she said.

Our correspondents report that a fortnight ago, kidnappings in Gauraka village in Tafa Local Government Area of Niger State, along the Abuja-Kaduna highway sparked a serious protest.

The angry residents razed a police station in the area alleging that the operatives were not protecting them.

Some vehicles and motorcycles impounded and kept in the premises of the police facility were also burnt by the fire.

Schools and businesses were all closed as the residents poured out on the road to protest the inability of the authorities to stop abductions of their kith and kin.

Hundreds of travellers were stranded between 7 am and 1 pm when a joint security team that included soldiers and policemen dispersed the protesters and reopened the highway for commuters.

Daily Trust further gathered that one resident was hit on the shoulder by a stray bullet from the security men while they were making efforts to rescue the Chairman of Tafa Council, Alhaji Ibrahim Mami, who met the protesters to calm them.

As the council chairman was addressing the crowd, some angry youths started pelting him with sachet water and stones before the security men rushed him into a vehicle and zoomed off.

It was in the process of shooting into the air to disperse the youths that a stray bullet hit the victim.

Some residents who spoke to Daily Trust accused the state and the federal governments of failing to protect them from kidnappers.

It was further gathered that four persons were abducted five days earlier in Gauraka and were yet to be released when the latest kidnapping incident took place.

The residents set bonfires on the road and barricaded the ever-busy highway which is a major transit corridor from the North to the Southern part of the country.

A resident, who simply gave his name as Musa, said they protested to register their frustration over the insecurity in their area. He added that they were feeling unsafe with the spate of kidnappings.

When contacted, the Suleja Police Area Commander, ACP Sani Badarawa, said about 10 persons who participated in the riot had been arrested and would be taken to the state police command headquarters in Minna for further investigation.

One of the concerned residents who spoke to Daily Trust lamented that his brother who was sick was also arrested.

But the Police Public Relations Officer, Niger State Police Command, DSP Wasiu Abiodun, who confirmed the razing of the station to journalists in Minna said only six people were kidnapped.

A security expert, Salihu Bakhari, said it was sad and inconceivable that the seat of power was under threat and called on the federal government to wake up from sleep and secure the country.

“Everybody knows that Abuja will not be safe because its neighbours like Niger and Nasarawa are under siege…Many towns and villages under the FCT are also not safe,” he said.

“All the bushes around the FCT have been infiltrated by criminals and they would soon start attacking Abuja if nothing is done and what this tells you is that nowhere is safe in Nigeria.

“The solution is very simple: the federal government should recruit more security operatives, deploy modern surveillance equipment and take the war to the bandits and terrorists in their hideouts. The criminals don’t come from the moon; they live around us and so, we should take the war them and not always being on the defensive,” he said.