Temper rises in Port Harcourt as Wike’s 12th flyover takes residents out of their homes, and businesses shut down while motorists meander through a chaotic… 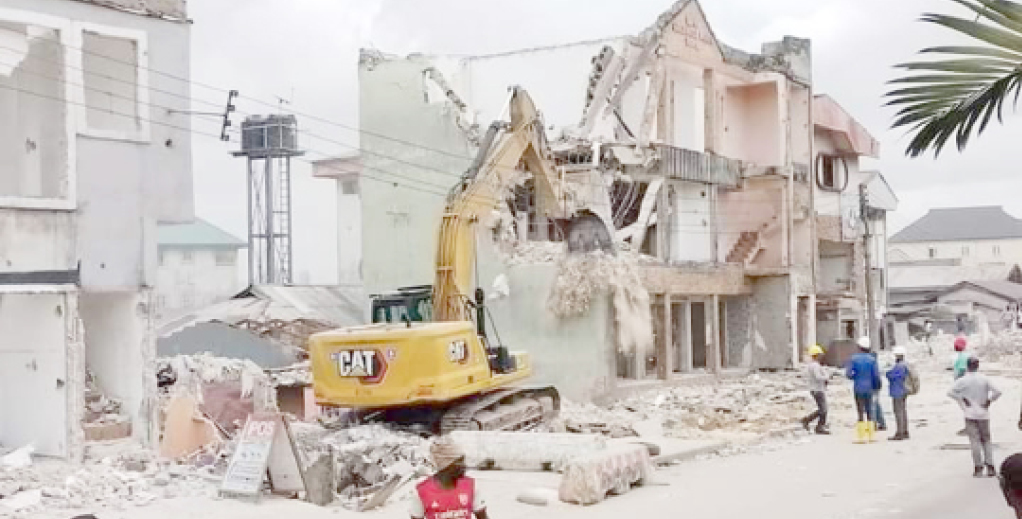 Properties demolished at Rumuokwuta, Location road to give way for Wike’s flyovers but owners of such properties said it’s under valued PHOTOS: Victor Edozie

Temper rises in Port Harcourt as Wike’s 12th flyover takes residents out of their homes, and businesses shut down while motorists meander through a chaotic traffic.

This is not the best of time for residents, property owners, business operators and motorists along the popular Rumuokwuta Junction, Location Road along NTA/Choba road and the Iloabuchi/Azikiwe road all in Port Harcourt and Obio Akpor Local Government Areas of Rivers State as Governor Nyesom Wike commences the construction of the 11th and 12th flyovers as well as the dualization of Iloabuchi/Azikiwe road in Port Harcourt.

Is ASUU pursuing a public interest and students’ welfare?

98 years of Sheikh Dahiru Bauchi: A century of service to Islam

Governor Nyesom Wike had in July awarded contract for the construction of two additional flyovers at the Rumuokwuta Junction and Location Roundabout. The governor during the signing of the contract said the two new flyovers will ease traffic gridlocks along the stretch of road, while the dualization of Iloabuchi/Azikiwe road will expand the area for business and ease traffic congestion.

The Rumuokwuta Junction and Location Roundabout Flyover projects have 10 months completion time frame while that of Iloabuchi Azikiwe road will be completed in six months record time.

The two additional flyovers have brought to 12 the number of flyovers awarded by the governor in the last four years. Our reporter learnt that all the flyover projects have cost the state about N63bn.

While Governor Wike said the two new flyovers and road dualization will ease traffic gridlocks along the stretch of the road, residents, property owners, business operators and motorists are not finding it very easy as the projects commences.

Some of the property owners said that their properties were undervalued and were shortchanged in the compensation plans.

A visit by our reporter to Rumuokwuta Junction, Location Roundabout and Iloabuchi/ Azikiwe road where demolition exercise has started to give way for the projects.

The residents, property and business owners were seen wearing long faces just as they were handicapped on the next line of action.

Rivers State Ministry of Works in a statement last week said it has created a dedicated desk at the Permanent Secretary’s office for property owners affected by the construction of flyovers 11 & 12 at Rumuokwuta/Rumuola Junction, and Mgbuoba (Location Junction) respectively, as well as Azikiwe-Iloabuchi Road to verify the compensation processes.

Our reporter learnt the state government has earmarked a sum N4bn for payment of compensation to property owners.

The State Commissioner for Works, Dr Dax George-Kelly D. Alabo, said the creation of the compensation desk was to eliminate any suspicion of being short-changed by valuers or agents as to enable affected property owners to come and verify the compensation amount due to them, and reconcile same with the valuers handling the payments.

He said there is no uniform compensation, saying that the amount each property owners are entitled is strictly based on the value of the property.

“This is in line with the directive of the Governor, His Excellency, Nyesom Ezenwo Wike on absolute transparency in the compensation process. The desk will be opened to these property owners from 10am on Tuesday, 23 August 2022. Verification will be done in an orderly manner,” Dr Alabo stated.

He appealed to those affected to resist the temptation of being used by those he described as destructive elements to cause chaos and civil disobedience that may hinder the specified time frame for these projects.

As property owners, residents and business owners affected by the projects lament the hardship imposed on them by the projects, motorists and pedestrians are not finding it easy as they were made to pass through the stress of the new road diversions while those who are not patient enough to withstand gridlock resort to long trekking.

Over 1000 small scale businesses and more than 300 buildings were affected by the demolition exercise. Some of those affected said they are finding it very difficult to cope with the situation.

A property owner along Rumola/Rumuokwuta axis, whose property were affected, John Chukwu, said he is yet to receive any money from the state government.

“As you can see, my building which includes lockup shops and the main building have been pulled down because of the flyover project. They said we will be paid based on commercial value of our property but as we speak, nothing has been paid to me. They said they have valued the cost of the buildings but I’m yet to get anything. The cost of my property runs into millions of naira. I am more concerned about my tenants who I’m indebted to. Many of them are coming for the refund of their money but I have nothing of offer them. I haven’t received a dime from government and anytime they pay, I don’t think what I will get will be enough to pay back tenancy rates to those affected. The property is being under valued,” he said.

Another property owner, Emenike Ojika, said what was earmarked as compensation is nothing to write home about with the value of his property.

“I have about ten lockup shops and another residential building with tenants. The shops were fully occupied with those who are involved in small scale businesses. It’s through these properties that I make money to sustain my family. Now that they have demolished the shops and building, where do I start from? My tenants are after me to pay them back their rents but what I’m going to get is very laughable. We want the state government to carry out its development projects with a human face,” he said.

A boutique owner, Gideon Okon, said he has lost huge sums of money since they were asked to vacate the area. “I own a big boutique here and since they asked us to move, because of the flyover, I’m yet to secure another place for my business. To worsen the matter, government is not looking in our direction in its compensation plans. They are only concerned about the property owners. The tenancy rate I paid will expire in December next year and my landlord is not saying anything about refunding me my money. He is saying that he is yet to be paid. But if he eventually gets paid and he decides to refund me, what am I going to do? Government has not made an alternative business location for us. They just came in and asked us to move and that is all. No compensation, no alternative accommodation to restart our businesses. Development should come with human face. The flyovers are meant for human being and one has to be alive to drive through the flyover,” he said.

He called on the state government to provide an alternative business premises for all those whose businesses were displaced by the flyover project.

Another business operator along Location area, who pleaded anonymity, said “from this moment, there is going to be an upsurge in crime because many people were affected in the on-going projects. Our leaders are so wicked that they carry out projects without human face. In a developed nation, the first thing government does before embarking on a project that will have socio economic impact on the people is to create a palliative measure to cushion the effect of such project on the people. Then the next line of action is to create an alternative business premises for those affected. But in our clime, the story is different. Government agencies wake up one morning and ask people to move out of their business environment without alternative measures provided. People will get frustrated and begin to indulge in one crime or the other,” he said.

At Iloabuchi/Azikiwe road where the state government is carrying out a dualization project, many of the residents who were displaced have either secured an alternative accommodation or relocated to their respective villages.

Some small-scale business owners who were affected by the demolition exercise have devised alternative ways of getting back to their customers.

A business owner in the area, Akachi Okorie, said he uses phone calls to contact his customers to place their demands.

“Many of us lost our shops due to the road dualization project. So, we just loiter around the area to canvass for customers while others use phone calls to make contact with customers. I contact my customers through phone and then supply whatever the person needs. This is the only option left for me now to survive,” he said.

Reactions are trailing the attitude of the state government towards those affected by the new projects.

Fyneface Dumnamene, the Executive Director of Youths and Environment Advocate, YEAC-Nigeria, said inasmuch as the demolition of buildings to pave way for road dualization and construction of flyovers is a necessary condition for such projects, human rights violations, lack of opportunity for fair-hearing and absence of dispute resolution mechanisms are of concern to the organization.

“Owners of properties along those roads have complained about short-change and undervaluation of their properties and instead of the Rivers State government to provide opportunity and mechanisms for them to seek redress, they are being threatened against peaceful demonstrations to vent their grievances,” he said.

He called on the Rivers State government to ensure that the rights of citizens affected by the project are respected and adequate compensation paid to them for their demolished properties to enable them relocate and get resettled.

The State Publicity Secretary of APC in Rivers State, Darlington Nwauju, said government should always have a human face because development is meant for the living and not for the dead.

“We cannot displace our own people in the guise of urban renewal and not first relocate them to liveable habitats or compensate them adequately in order to reintegrate them economically into the society,” he said.