No fewer than two persons have died in the three-storey building that collapsed on Tuesday at the Beirut GSM Market in the Kano metropolis. The… 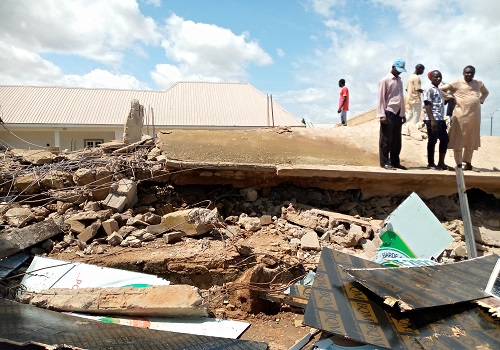 No fewer than two persons have died in the three-storey building that collapsed on Tuesday at the Beirut GSM Market in the Kano metropolis.

The Secretary of the Nigerian Red Cross Society in Kano, Musa Abdullahi, said an official of Kano Electricity Distribution Company (KEDCO) was electrocuted during the rescue operation and died on the spot.

Similarly, the National Emergency Management Agency (NEMA) has confirmed that one person died from the eight rescued victims.

“Sadly, one person died out of the rescued victims, six persons with minor injuries had been treated and discharged, while one person with multiple fractures was still receiving treatment,” the NEMA official said.

Meanwhile, Kano State governor, Dr Abdullahi Umar Ganduje, has revoked the title of the land of the collapsed building.

Although the owners of the building had yet to be ascertained, the State Emergency Management Agency (SEMA) said substandard materials were used for the construction.

The governor during a visit to the scene on Wednesday said, “Originally, this place should be a parking space only. It is too small for shop construction.”

He directed that the place should be converted to parking space.

He added that a technical committee would be instituted to look into remote and immediate causes of the tragedy.

“We should know that from onset, any building should be designed and supervised by professionals. Within a period of one week, only this committee will submit its report and we will act on it most appropriately,” he said.

He urged marketers to cooperate with workers who were excavating debris, adding, “After excavating the scene properly, government will immediately start providing a befitting parking space.”