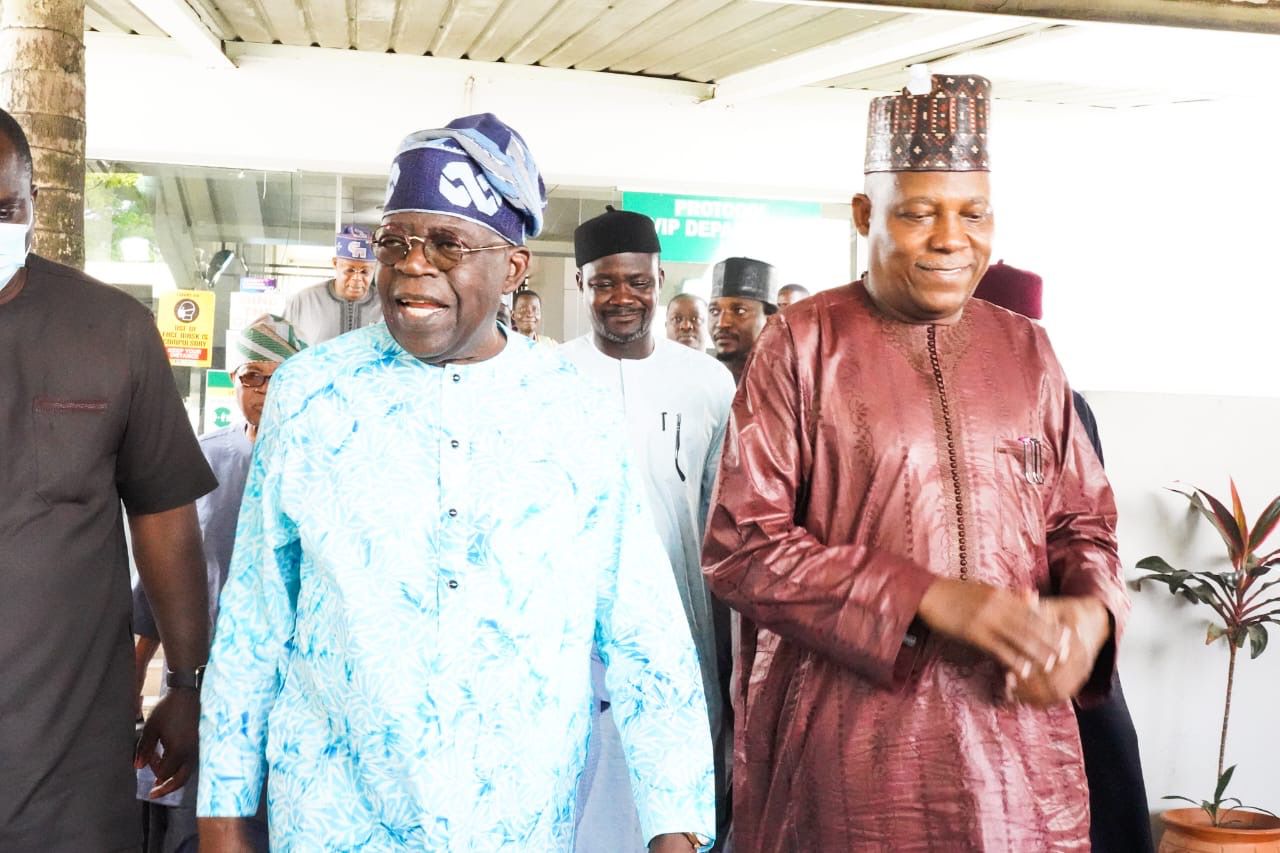 Physically remote but fully involved in the processes leading up to Asiwaju Bola Ahmed Tinubu’s victory at the APC primaries and also in the power play that led to the emergence of Senator Kashim Shettima as the vice presidential candidate of the All Progressives Congress, it was with quixotic astonishment and predictable derision that the mere suggestion of a controversy over a same-faith presidential ticket provoked my angst and anger.

When are we going to stop laying the foundation of every new experiment in national development on trivia? When will we stop chasing the shadows of selfish greed and particularist obsession with power and embrace the task of national transformation that has become our generational opportunity or imminent apocalypse?

Whatever the permutation- Christian/Christian, Muslim/Muslim or even Animist/Animist – reducing the gargantuan task of taking the country from the brink of socio-economic chaos to a debate over faith reflects the numbness of the elite to the flaring anger of the swarming throng of the hapless and hopeless.

It is an involuntary suspension of reason when in great need. How many of us, on boarding a plane, enter the cockpit to interrogate the religious identity of the pilots? Or do women in labour insist on the faith of the midwife before delivery? In critical situations as these, we trust the expertise of the persons in charge, convinced that we are in safe hands.

Just to remind us and jerk us out of our reverie, look at what the figures are saying.  In terms of poverty, the Nigerian Bureau of Statistics has reported that foreign investment, a principal source of industrial production and jobs in our liberalized economy, declined by 81.46 per cent from $8.49bn in the first quarter of 2019 to $1.57 billion in this year’s first quarter.

No wonder NBS could report that unemployment increased from 27.1 per cent in the second quarter to 33.5 per cent in the fourth quarter of 2020. In this period, NBS reported that 12,160,178 Nigerians had no work to do! Among the youths aged 15-34 years, the unemployment rate was 42.5 per cent. Embarrassed by the worsening situation of job scarcity, the NBS has cleverly kept the figures for 2021 and the two quarters of 2022 to its chest.

These statistical admissions are the cosmetics of grinding and crushing poverty in urban homes and rural households amidst inflationary spikes because the suffering of our people is beyond what these figures capture. They viscerally illustrate that the economy needs to be overhauled urgently and make an emergency of our ‘normalcy’.

Nobody needs a soothsayer to see the connection between the economic recession and crime, unemployment and kidnapping and between hyperinflation and the citizens’ desperation to run from pillar to post to survive even if it means using children, brothers or neighbours for money rituals whose efficacy is false.

From individual anarchism to sub-national rebellion, from separatist movement to fundamentalist invasion, Nigeria is pulled taut at the seams by centripetal forces even as her legislative, executive, judicial and bureaucratic managers are busy sharing the national cake that remained after the creditors have taken their interest for the month. And that is why the controversy over a Muslim-Muslim ticket, Christian-Christian ticket or any same-faith permutation is so provocatively out of tune with the needs of a country ridden with poverty and insecurity and threatened by the daredevilry of those who sold the country seeking to return to plunder.

Who gains from the current faith induced anti-Tinubu campaign? Certainly, not the millions of devout parishioners and congregants whose meek surrender to fate and hope of a better tomorrow lies in the conviction that Christ has died for their sins. They know they will not be invited to the Villa to attend service with the Chaplain or share Holy Communion with ministers and permanent secretaries. They know they will not leverage on any pastoral claim to the earthly acquisition of wealth to ask for contracts or juicy appointments. And they know that when state banquets or weddings of the President’s children hold, they would be content to watch their leaders laugh and grin excitedly in conversations with the high and the mighty. So It is actually the golden layer of Christendom that fears it will suffocate if it has no one to call to circumvent one government policy or the other or consolidate access to authority and the public purse.

However, once we refuse to reduce our elected officials to their religious identities, we establish a civic code that enables all of us to engage as citizens and restrain them from violating their oath of office by favouring one religion or another. It will enable them to face the urgent task of rescuing the country from poverty and insecurity by casting away the distractions of religion.

We should have learnt our lessons. The history of our present predicament, particularly since 1999, cannot be told without the roles of presidents and vice presidents who disguised their real personalities, with religious cloaks. A President once made us believe he was born again. He preached in prison and even built a church. But when his Christian values were put to test by the Courts for wrongfully seizing the revenue allocations to Lagos State, the meanness of spirit showed boldly. He did not care if Christians in Lagos State who would be affected by his unconstitutional act starved to death.

With all his pretences, Goodluck was promoted by Obasanjo as a good Christian from the South-South first as Vice President and later as president. The reign of the Boko Haram slashing the throats of farmers became ferocious under his watch. As the simple, poor faithful folks flocked to cemeteries to bury their dead, many of their faith leaders were clinking glasses of champagne in Aso Villa and purchasing jets in the name of the Lord. For each of these leaders -Christian, Muslim or Animist – that mobilised us based on faith to gain power, public office has subsequently exposed them as mere mortals with the same pecadilloes to succumb to temptations, arrogance of power and oftentimes, gross incompetence.

Many of the antagonists of the same faith ticket argue as if the specific electoral context that led to the decision of Asiwaju Bola Ahmed Tinubu to pick Senator Kashim Shettima is irrelevant. They must realise that the All Progressives Congress delegates made Asiwaju the flagbearer because he has demonstrated the tested capacity to win for the party. The concrete, visible evidence is Lagos State, where for 23 solid years, he has led the party to victory. In 16 of these years, the party that he consistently defeated in Lagos was in full control at the federal level with unfettered access to humongous resources and control of the coercive apparatus of the Federal Government.

To justify this huge confidence, Asiwaju is challenged to demonstrate that if he could help the party end the inglorious era of the PDP as the ruling party, he commands the strategic and tactical capacity to consolidate the control of the Federal Government by the APC to tame the hydra headed monsters bedevilling Nigeria currently. It is electorally, a game of numbers focused on the history of the voting behaviour of citizens for the party. When you crunch the numbers, the APC has relied on the Northern states to win the presidency. It was the repetition of the feat of 12 million votes that made the merger of the founding parties so realistic in the first place. It worked in 2015 and 2019. As it is said, you don’t change a winning formula.

For consistently delivering for the party, the Northern states have become the strongholds of the APC. President Muhammadu Buhari continues to hold sway, particularly in the North Western zone. To further consolidate the votes, the vice presidential ticket in the North East is a tactical offensive to share the votes of the rival PDP in the zone of its presidential candidate rather than give him a free ticket.

Any concerned party man who looks at the matter more from these power perspectives will likely sympathise with Asiwaju for taking a difficult but smart decision than resort to threats or tantrums. The vice presidency is significant but the Presidency is elaborate executive machinery in which many offices will require loyal and competent hands. Getting down to brass tacks, how does picking a Christian Vice President improve the general welfare of the average Christian in Zungeru, Ikoro Ekiti, Awka, Badagry or anywhere else ? How has a Christian vice president stopped or suppressed the alleged persecution of Christians in the last seven years to justify the current cacophony ? Yes, Nigeria is multi ethnic, multi religious, multicultural etc, but should we be perpetually trapped in the quagmire of pervasive religiosity devoid of actual spirituality ?
I was born a Christian and remain a Christian for life and no force on earth can convert me to any other religion but my faith does not enslave me to the wily self aggrandizing manipulation of some strident politico-commercial faith merchants !

This is the period Nigerians should seriously interrogate more germane governance issues like security, infrastructure, economy etc vis a vis the capacity, capabilities, track record, experience, vision, knowledge and courage of the presidential contenders rather than dissipate energy on sabre rattling, unedifying, strictly unproductive controversy over the religious tag of a ticket !

The presidential election is crucial but it will take place simultaneously with governorship, national and house of assembly elections. These are the tents that people will return to when the elections take place in February. Therefore, there is no basis for the zero-sum tension that those who lost out in the vice presidency bid are orchestrating. It’s about time Nigeria broke the chains tying her economic, political, social and spiritual progress .