Reasons farmers should use ‘three-bag’ technology for cowpea storage 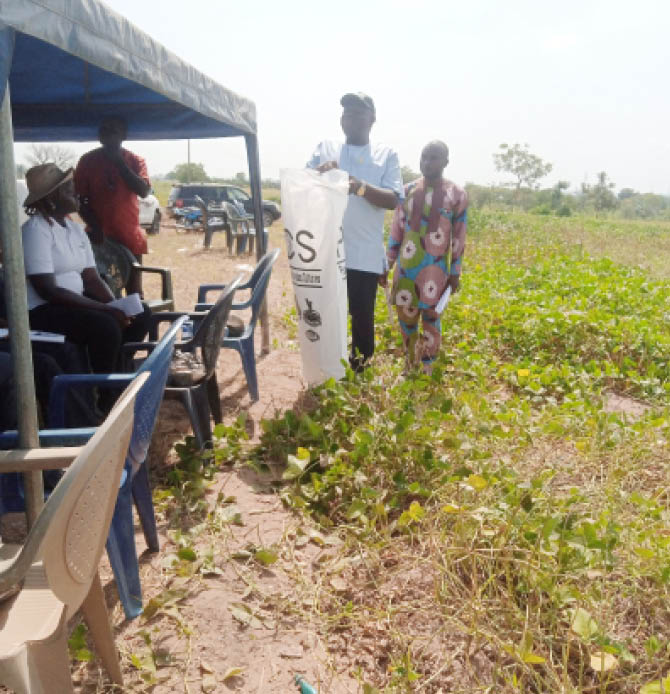 Cowpea farmers in Benue State have been taught the use of a ‘three-bag’ technology to store their produce for a long period after each year’s harvest.

This is even as the College of Agronomy in the Joseph Sarwuan Tarka University, Makurdi (JOSTUM) would soon release a new improved variety of cowpea to enable farmers boost food production.

Our correspondent reports that the proper use of the technology, otherwise referred to as ‘air-tight’ bags, was introduced to the farmers during this year’s Field Day organised by the College of Agronomy.

Sequel to the technology, farmers had worried about their inability to prevent weevils from spoiling their harvested cowpea, a development that had often led them to apply chemicals on their produce for safekeeping.

How youths generate income through farm labour in Kano

But Dr Teryima Iorlamen, an agronomist, who tutored the farmers, said the application of chemicals on cowpea in a quest to curb wastages had often led to rejection of the product at export markets.

Speaking during the Farmers’ Field Day on Wednesday in Makurdi, Iorlamen, who is also a seed systems principal investigator with the Accelerated Varita Improvement and Seed System Delivery in Africa (AVISA) programme, alongside his assistant, demonstrated the correct use of the three-bag technology to achieve desired results.

He said, “The three-bag technology helps to store cowpea properly without any fear of spoilage. The bag is air-tight. If the usage of technology is well adhered to, the cowpea can stay in the store for two years and nothing will happen to it.”

He further demonstrated to the farmers how to dry their harvested cowpea when due to package in the bags, and how safely to tie the bags before putting same in a well arranged store under the right moisture.

Earlier, Iorlamen disclosed that the researchers in the college of agronomy were almost set for the release of a new variety.

He said the new variety, expected to be known as FUAMPEA 5, was developed to satisfy the yearnings of cowpea farmers across the country.

Our correspondent reports that the institution, formerly referred to as Federal University of Agriculture, Makurdi (FUAM), had earlier released some varieties known as FUAMPEA 3 and 4, which was an improvement of FUMPEA 1 and 2 developed in 2016 to suit the climatic weather of Benue’s geographic region.

The agronomist said the development was prompted by the necessary feedback from farmers and other stakeholders who wanted the researchers to come up with a particular size and colour of cowpea as an improvement of other varieties.

“We are almost there to release FUMPEA 5. After the release of the FUMPEA 3  and 4, which is brown and bigger, the farmers began to request for a white and bigger size cowpea. So, we are making the big seed,” he said.

Iorlamen explained that the new variety developed by JOSTUM’s Professor Lucky Omoigui of the Department of Plant Breeding and Seed Science, in collaboration with the International Institute of Tropical Agriculture (IITA), under the AVISA programme and supported by Sygenta Foundation for Sustainable Agriculture (SFSA), would further put the university on the global map.

He maintained that the FUMPEA was an improved cowpea seed variety that enables farmers to produce the early maturity duration, size, taste, colour or quality of the cowpea they like.

The FUMPEA, in his submission, would help the farmers to produce brown or white cowpea with sweeter taste. He added that other new hybrid and early maturity varieties were also available to farmers in the state, as well as those within the North Central region to grow for commercial purposes.

Iorlamen added that Omoigui, a professor of Plant Breeding and Genetics, developed the all FUAMPEAs in collaboration with the IITA, and that all seven improved varieties so far by the institution are currently available for farmers’ use.

A cowpea farmer, Samuel Yima, who came all the way from Gboko to participate in the Field Day, exclaimed that the FUMPEA variety was the best thing to happen to him as a farmer.

Excited about the three-bag technology, Yima said, “I have experience a good thing today. Even this new variety with fodder can be used to feed my livestock, and at the same time, generate income for me.

Similarly, Rosemary Ahoobo, a cowpea farmer, encouraged other rural farmers to go ahead and cultivate the high yielding varieties for consumption and income generation.

“I don’t only earn money from cultivating cowpea but for consumption. It has really helped me because my children used the cowpea to prepare various delicacies, which they take to school every morning,” Ahoobo disclosed.

Meanwhile, the country coordinator of the SFSA, who was represented at the Field Day by his project assistant, Mojisola Olufemi, appreciated the works being done by the scientists of the College of Agronomy as she stressed the need for the commercialisation of the improved varieties so that they don’t end up in the shelves.

“If we don’t get the good work being done here to the end users it would be a calamity, and that’s why our organisation has been part of this journey to commercialise these varieties. We take it to the farmers under the AVISA project,” Olufemi added.