Several fans of ace artiste, Ayodeji Balogun, well known as Wizkid, have reacted to a recent video that emerged on the internet, showing him and… 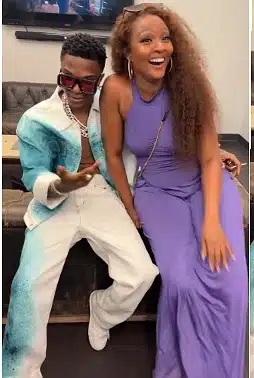 Several fans of ace artiste, Ayodeji Balogun, well known as Wizkid, have reacted to a recent video that emerged on the internet, showing him and actress Osas.

In the video which is now making the rounds on the internet, Wizkid was spotted backstage at the Madison Square Garden in New York, with Osas.

Wizkid accommodated the actress on his lap, with his hands around her waist as he spoke silently to her ears which made Osas laugh profusely.

Recall in January that many Nigerians sparked rumour of the duo dating after posts showing them taking pleasure in the each other’s company, first at his London show and later at W Bar in Lagos.

Several people also reacted to the video of the duo on the social media.

@Da_QueenVee tweeted; “Am I the only one who’s wondering what Wizkid said to Osas? Her excitement though.”

@Pulsenigeria247 also tweeted; “We need someone to read his lips. 😍☺️”

@nellynells stated, “ It’s the hands on the hips for me.”

@xena_sage also tweeted, “Maybe he said she makes him look too short cause osas had to downsize for a minute there.”