Reactions, at the weekend, trailed plan by the Daura Emirate Council to turban Yusuf, the son of President Muhammadu Buhari, as ‘Talban... 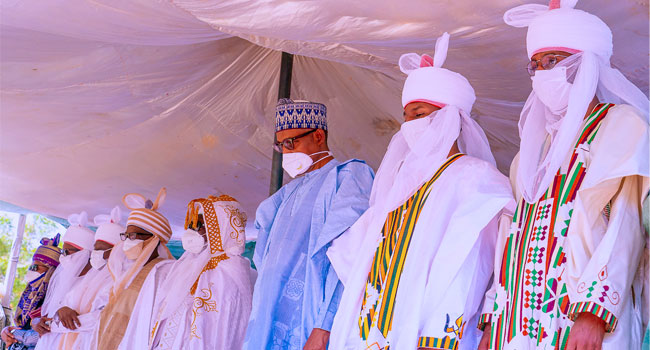 Reactions, at the weekend, trailed plan by the Daura Emirate Council to turban Yusuf, the son of President Muhammadu Buhari, as ‘Talban Daura’ amid a spike in insecurity in the president’s home-state of Katsina and other parts of the North.

Many social media users and other Nigerians expressed mixed reactions on the planned ceremony, with many of them condemning the planned fanfare.

A copy of the invitation letter sent to one of the northern emir’s was widely circulated in social media platforms over the weekend, generating reactions from Nigerians.

A resident of Katsina, Armaya’u Abdulhamid, said it would be “callous” on the part of leaders to attend and give prominence to such an event.

“But if they do it in a very low key, then I believe that is okay as stopping it will not change the situation the country is in,” he said.

Abdurraman Abdullahi, the chairman of the coalition of civil societies in Katsina, said it would be an open display of nonchalant attitude by the family of the president to organise a flamboyant ceremony when people are being killed on a daily basis.

“If you look at Katsina as one of the states most hit by this problem, where people are killed, raped and their property looted, and the first family decides to invite people from all over the country to celebrate and make merriment, then it shows their total indifference to  whatever is happening in the country.

“But if it is just an emirate affair and they decide to conduct a ceremony that will not attract the attention of the nation, that is a different thing because Daura has relative peace compared to Katsina emirate. Even at that, courtesy demands that it should be done with caution,” he said.

Aliyu Daura, the President of Daura Emirate Development Association, and National President of Katsina Indigenes Association, said though he had not been informed officially, the occasion could be used to pray for the peace and security of the nation.

“What is happening is not peculiar to Nigeria; it is all over the world. So, the most important thing is not to blame leaders and all these accusations, but to return to God, because all of us need to reflect on our deeds and see how we can mend what is between us and our creator,” he said.

A member of Daura Emirate Council, Galadiman Daura, and the District Head of Mai’adua, Alhaji Ahmad Diddiri Ahmad, confirmed the planned event, saying the emirate was waiting for the approval of the state government to go ahead with the turbaning ceremony.

When asked whether that would not be tantamount to I-don’t-care attitude on the part of the emirate as well as the presidency, taking into consideration the insecurity in the country, particularly with the recent killings in Sokoto and Katsina states, the council member said the emirate did not look at it from that perspective.

He, however, said people were entitled to their opinions.

“But any sensible person that considers how long we have come through in this issue will not but salute our courage. We have cancelled Sallah Durba on a number of occasions and by doing so, even other emirates followed suit.

“We are equally disturbed by this issue of insecurity which affects all of us. It is as a result of the problem of security that even our markets are closed. Why then should people think that we are not showing concern about it?

“But the situation we are in cannot prevent us from holding the turbanning ceremony of a district head if the need arises. If you consider the fact that other things like wedding ceremonies, going to markets and the like are still going on, this one will not also be different.

“Some of these accusations are politically motivated and the emirate council will not allow such political talks to disrupt its line of activities and the moment the state government gives the nod, I assure you we will go ahead with it.

“In this nation, whatever you intend to do, no matter how beneficial, somebody will go against it, so we are not disturbed, worried or angry about the opinions people are holding; what is not good is baseless and unfair accusations, otherwise, people are entitled to their opinions,” he said.