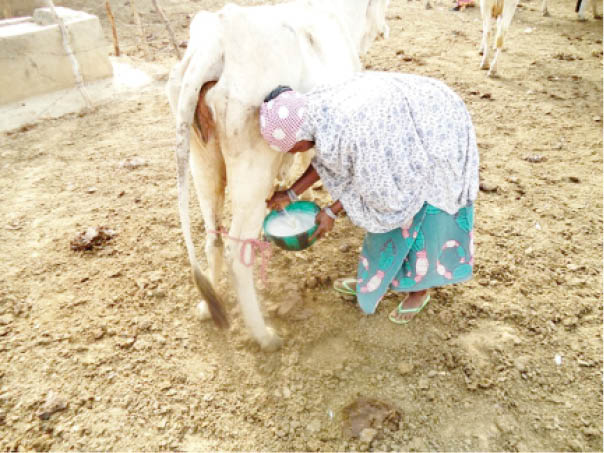 A woman milking her cow

The Commercial Ranchers Association of Nigeria (CODARAN) has expressed support for the restriction placed on access to foreign exchange for dairy products.

Recall that the Central Bank of Nigeria (CBN) issued a circular over a year ago on restricted companies seeking foreign exchange through the official window to import milk and dairy products.

But during a recent visit to the governor of the CBN, Godwin Emefiele, the Director-General of the World Trade Organisation (WTO), Dr Ngozi Okonjo-Iweala, said the European Union (EU) had filed a complaint against Nigeria over the restriction.

In a statement by DianabasiAkpainyang, the CODARAN noted that Nigeria had the potential to harvest dairy products that would provide jobs and create investments in local production of milk.

“The CBN governor is right. Nigeria truly has the potential to sustainably meet its dairy requirements. If 20 per cent (over four million) of the over 20 million heads of cattle currently used as Nigeria’s estimated cattle population were producing one litre of milk per cow daily, two-third of a year (discounting for seasonal and other dynamics), then there would be 900 million to 1billion litres of milk available for collection across the country in a year,’’ he stated.

Akpainyang noted that the milk available for collection and processing may not be anywhere near the figure at the moment, but pointed out that since the likelihood is there, it is necessary “for everyone to put their feet on fire” due to the urgency required to develop the local dairy sector.

While citing a report by the CBN that Nigeria spends about $1.5billion on importing dairy products annually, he said the figure would increase as the demand for dairy products increased.

He, however, said the problems were tackled by the Advancing Local Dairy Development in Nigeria (ALDDN) programme, which is currently running in four states – Adamawa, Kaduna, Kano and Plateau.