Ramadan: Reactions as demand for ‘Abaya’ trends on social media

Comments on Facebook and Twitter indicated that the choice of Abaya has become a “demand-for-demand” affair between unmarried ladies and their suitors. 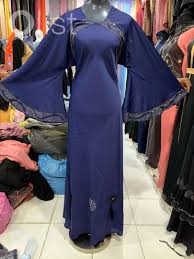 At the end of Ramadan comes the Eid/Salah celebration and women, especially those from Northern Nigeria, have agreed on a fashion outfit as the trending one for the festive period.

This year, Abaya, the long flowing dress of Arabian culture, is the trendy choice.

The consensus for the Abaya has been emphasised by the #AbayaChallenge, which has taken social media by storm.

However, comments and reactions on social media as well as warnings from clerics have shown that there is an immoral aspect to this trending challenge.

Comments on Facebook and Twitter indicate that the choice of Abaya has become a “demand-for-demand” affair between unmarried ladies and their suitors.

The stylish Arabian dress is quite expensive as it ranges from N15,000 above.

There have been allegations that women who can’t afford Abaya get involved in sexual affair with men in order to get the dress for the forthcoming Eid celebrations.

Speaking to Daily Trust, a woman, Bilkisu Muhammad, noted that having Abaya in the forthcoming Eid festival is another way of showcasing one’s classic exposure as a young lady without which you might feel inferior and be belittled amongst peers.

“I can’t allow anyone to belittle me and that is why I must have this Abaya dress. If you don’t have this dress, you cannot be bold to claim to be a classic lady,” she said.

On the contrary, Aisha Ali, described the trend as “balderdash”, stressing that any woman that resorts to any form of sexual affair to have this Abaya is already familiar with the traditions of it (immorality).

“It is unfortunate that most women ask men to buy this Abaya dress for them even after knowing the dirty things they have to do before getting the abaya. I hope they will understand before it is too late,” she added.

Umar Musa, however, said men should not be seen as Automated Teller Machines (ATMs) any woman who asks a man to buy her Abaya, she knows exactly what she has to give in return.

“I have seen it several times where ladies send their requests for something and also propose to give back something in return.

“I don’t want too explicit, but a woman losing her virginity for something is very wrong and sad to recall,” he added.

Clerics have been urging parents through sermons to be more vigilant and observe carefully the kind of things their children indulge in.

Dr Zahra’u, in her Ramadan Tafseer, said, “Parents should be very careful with their children.

“Your daughters will go to their boyfriends and come back with Abaya as a gift, please reject it. You should warn your daughters because this time around the devil will deceive our daughters through the #AbayaChallenge.”

She urged the ladies to, if possible, leave the #AbayaChallenge and use what they have to celebrate the festive period.

“So we heard from different sources that girls request their boyfriends to buy Abaya for them and the guys too request for in return,” she added.

She, however, appealed to parents to take action before anything happens and distance their daughters from anybody that is willing to buy the Abaya for them, adding that they should also pray for their daughters.