The 2022 FIFA men’s World Cup kicked off on Sunday, November 20, with Qatar, becoming the first host nation to lose their opening match since… 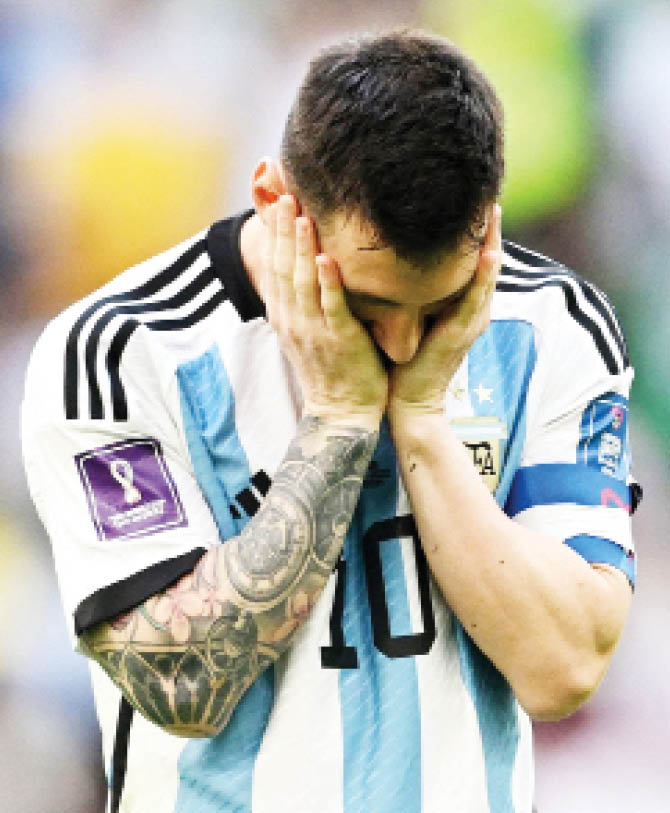 Lionel Messi reacts after the shocking loss to Saudi Arabia

The 2022 FIFA men’s World Cup kicked off on Sunday, November 20, with Qatar, becoming the first host nation to lose their opening match since the inception of the global showpiece about 93 years ago.

Apart from that unwanted record by the host nation, there have also been two major and memorable upsets so far. The first was witnessed when pre-championship favourites were stunned 2-1 by the less endowed Saudi Arabia.

Apart from surrendering their 36 unbeaten run in international matches, the loss became Argentina’s first defeat in the World Cup after taking the lead. It was also their first opening day loss since 1990 when they were beaten by the Indomitable Lions of Cameroon.

Many are still wondering how the Saudis sent the Argentines crumbling after falling behind early in the match. As expected, the match started with Argentina controlling the game and creating big chances. In the 8th minute things went as planned as the South American side won a penalty, after Al Bulayahi fouled Parades. Their talismanic captain, Lionel Messi, coolly slotted home and all thought the heavens would open.

However, the Argentines major undoing was their inability to beat the offside trap by their opponents. The offside trap set by the Saudi defenders, sometimes six of them on a straight line, led to three offside goals, one by Messi and two by Lautaro Martinez. More offside decisions came after and at the beginning of the 2nd half. The Argentines recorded more offside calls in the game than in the entire 2018 edition, a master-class by Herve Renard.

Then Renard’s men made a sensational comeback in the second half, scoring two goals in five minutes. First Saleh Al-Shehri held off Cristian Romero to neatly place the ball in the far corner before, in the 53rd minute, Salem Al-Dawsari tricked his way past a defender and curled in an unforgettable effort from the left edge of the area into the top-right corner.

Yasser Alshahrani continued to spark life in the defense with Mohammed Alowais making crucial saves. Linoel Scaloni’s substitutes could not make any impact just as Messi became anonymous in the second half. The shocking result which has put Argentina’s chances of progressing in the tournament in jeopardy sparked life into the tournament and a public holiday was declared in Saudi Arabia.

After 24 hours, another epic upset came when Asian giants, Japan defeated 2014 Champions, Germany by 2-1. The ‘German machines’ took the lead on the 33th minute when David Raum was rashly brought down by Gonda.

Gundogan stepped up to score his first World Cup goal as he sent Gonda the wrong way. Before the stroke of halftime Kai Havertz goal was ruled offside. Not much was expected after that as Hansi Flick’s men controlled the game with ease and Jamal Musiala produced some magic despite his poor finishing.

Musiala’s magic continued in the Second half but to no avail. Then Japan made some changes and history beckoned. Doan fired the ball into an empty net with 15 minutes left on the clock. In the 83rd minute, Asano produced a memorable moment after a magical first touch that set him perfectly on goal.

Without doubt, the former champions paid for their profligacy despite their dominance.  Of course, the Japanese have their 12th man in the stands to thank for one of the biggest upsets recorded in Qatar and the history of the World Cup.