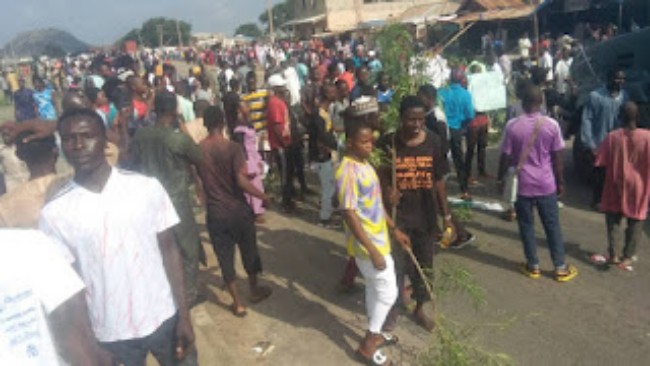 Students of Abubakar Tatari Ali Polytechnic ATAP Bauchi and other institutions on Tuesday embarked on a protest that turned into violence and looting of public properties, a development that resulted in the blockage of the Bauchi-Jos Highway.

The protest followed the two weeks warning strike embarked upon by the Bauchi State Government-owned Tertiary institution to draw the attention of the government to their demands.

The road is used by commuters from the six North-eastern states to Abuja which includes: Adamawa, Borno, Bauchi, Gombe, Taraba, and Yobe.

Confirming the incident, the Bauchi State Commissioner of Police, CP Umar Mamman Sanda, condemned the violence that trailed the protest by the students.

A statement signed by SP Ahmed Mohammed Wakil, Police Public Relations Officer, on behalf of the Police Commissioner said: “Protesters took a toll on the Jos-Bauchi highway thereby attracting some miscreants and hoodlums and degenerated into a violent demonstration, including the smashing peoples’ vehicles, damaging properties, extortion of mobile phones and looting some shops situated opposite the school.”

Sanda said a Police team led by the Area Commander Metro and a police anti-riot squad rushed to the scene and tried to appeal to the students’ leader, but yielded no positive result.

“The students started throwing stones and other dangerous objects at the Police team which led to serious injuries to the Police officers. The violent protesters were eventually dispersed and normalcy was restored,” the statement reads.

When our correspondent visited the Ministry of Education, no official was ready to react to the development. The Commissioner, of Education Dr. Aliyu Usman Tilde was said to be out of office.