It seems Governor Yahaya Bello is serious about his rumoured interest to contest in the 2023 presidential elections.  On March 03, 2021, he convinced the… 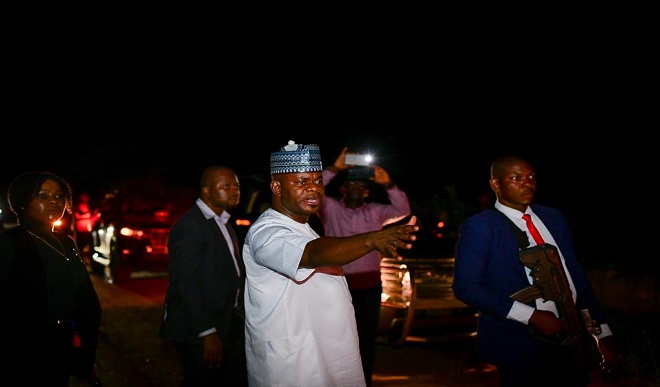 It seems Governor Yahaya Bello is serious about his rumoured interest to contest in the 2023 presidential elections.  On March 03, 2021, he convinced the Amalgamated Union of Foodstuff and Cattle Dealers of Nigeria (AUFCDN) and Northern Consensus Movement with their Chairman from all the 36 states of Nigeria including the FCT to reach an agreement to end the food blockade to the south. On February 28, the governor met former President Olusegun Obasanjo. On February 26, he bagged the “BUSINESS DAY GOOD GOVERNANCE AWARD 2020” as Best Governor in Women and Youth Empowerment. On February 23, he received clergy men and women. On February 17, he received an award from the National Youth Council of Nigeria (NYCN). On February 8, he made a daring attempt to bring back to the APC, a former Minister of Aviation, Chief Femi Fani Kayode (FFK).

The big question is, does Bello have the capacity to be president in 2023? Has he done enough as governor of Kogi State to convince other Nigerians to vote for him? How about the quest to return power to the South, considering Bello is a northerner? Would he use his youthful advantage to win over Nigerians?

If Yahaya wants to be president in 2023, he must use four factors as  starting points. First, he needs to showcase to Nigerians what he has achieved as governor of Kogi State. Secondly, he must convince southern politicians, why it should be him and not them, after eight years of a fellow Northerner- Muhammdu Buhari. Thirdly, and the most difficult – convince the APC as a party to give him its presidential ticket via support from the critical stakeholders and the ‘owners’ of the party. Governor Yahaya has done well in mobilisation for the ongoing membership revalidation of the APC. Fourthly, and the last, he must convince his primary constituency, the North, to rally behind him.

Some six years ago, Governor Yahaya, one of the youngest governors in Nigeria, found himself in the saddle of responsibilities at a period when Nigerians’ quest for change was strong and people had high expectations from the leaders. It was a period most states, including Bello’s Kogi, were witnessing near breakdown of most systems, high level of poverty, corruption, energy crisis, insecurity and the pitiable misrule.

The Yahaya Bello I know during my short stay at the Revenue Mobilisation Allocation and Fiscal Commission (RMAFC) was not the Yahaya Bello as governor of Kogi State. At RMAFC, he was at the Allocation Department, while I was at Planning, Research and Statistics. Well, we expect his return to the real him- a great thinker, a silicon-valley-thinker- a man who can move the government with the speed of the imagination of most Kogites.

Bello still has ample time. He has a golden opportunity to redeem and relaunch his political career. Bello can as well choose to assert full authority and put a strong personal stamp on his government and go to sleep. Many young Nigerians had hope that Yahaya as governor  would serve as a fulcrum for youths to prove that they can lead in creative and innovative ways during a period of uncommon challenges. Has Yahaya proven that?

Governor Yahaya has done well in his own rights, especially in the area of security. But his opponents said his non-payment of workers’ salaries at the due time, which is a matter of life and death, has rubbished all the areas where he has excelled. His opponents said he is controversial, thus Nigeria is complex and too big for him. They further said some factors brought Yahaya Bello back to Lugard House, Lokoja- Kogites’ unique historic way of voting- every man for his own, incumbency- Bello had at his disposal; power, resources and federal might that scared any political opponent. During his re-election campaign, the  APC  supported Governor Yahaya massively – the party didn’t  look at Yahaya Bello as a person, rather they ‘pre-gauged’ 2023- losing Kogi would be politically disastrous for the APC in 2023.

Nigeria’s politics for presidency is exceptionally unpredictable.  Governor Yahaya may surprise us since he has started early- he may get some support from some Southern politicians, since it is a matter of politics. The Northern oligarchy may be too hard for him to knock, but he may scoop some of their support including that the youth may rally around him. Getting APC’s presidential ticket is a big game depending on where the support of President Buhari and his lieutenants tilt. Governor Yahaya is in a gamble, though that’s what politics is.