Located behind the revered Emir’s palace, the Ilorin Central Jumaat Mosque is an iconic structure that not only stands as a pride to the indigenes… 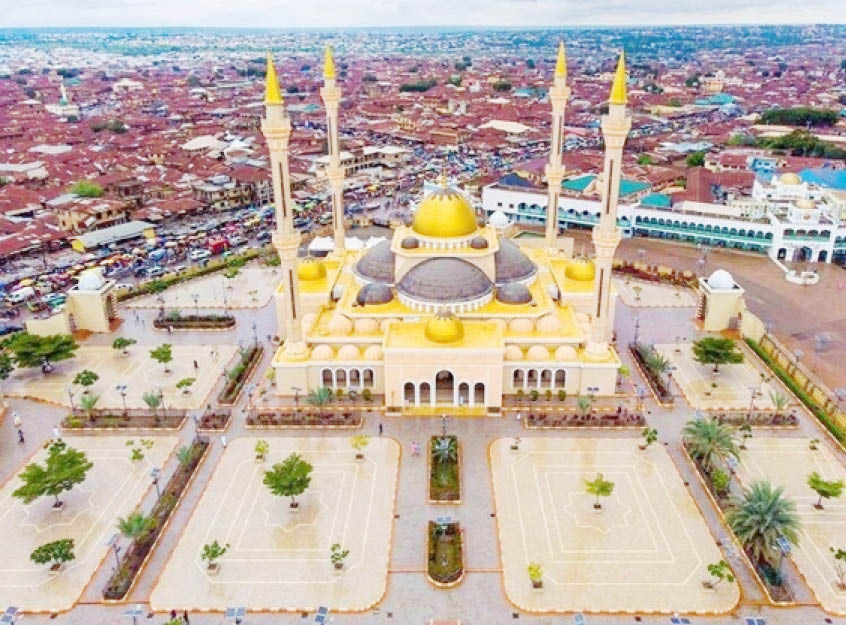 Located behind the revered Emir’s palace, the Ilorin Central Jumaat Mosque is an iconic structure that not only stands as a pride to the indigenes of the emirate across five local government areas of Kwara State, but represents the pride and rich Islamic history of the city.

Remoulded from its old state to a world-class facility in 2012 through the efforts of former Senate President, Dr Bukola Saraki, during his time as governor of the state, the mosque, described as the best in Africa, has attracted Muslim tourists from across the world due to its architectural design and calligraphic masterpiece.

However, the facility became a subject of serious concern in the Emirate after a pre-wedding photo shoot within its premises went viral. The 1m:33s video showed the would-be couple mixing freely within the sacred premises which are considered sacrilegious within the religious circle.

Shortly after the video surfaced online, it generated divergent reactions in many social media platforms in the state and reportedly attracted condemnation from sons and daughters of the emirate in the Diaspora and other Muslim world.

Commenting on the issue, an Imam and a social commentator in the state who preferred not to be named because of the sensitivity of the issue, said “The mosque is a masjid. In the Islamic culture, mosques are for Allah, not for marital frivolities that are inconsistent with the sunnah, and for those who had attempted to rationalize the action by suggesting that the Taj Mahal in Indian has countless snapshots of the courtyard in wedding photos, it is very sad.

“The Taj Mahal is a mausoleum built by a Mughal emperor to honour his wife. It is a tourist centre, not a mosque. The Ilorin Jumaat Mosque is controlled by Muslims, unlike the Taj Mahal. Many hotels in Abuja and other places have mosques, but they are primarily hotels not mosques,” he added.

A staff of the central mosque who spoke on the issue, told Daily Trust on Sunday that “We see people after the Friday prayer coming with different clothes to take snap and video shots and we allow them because we don’t suspect their motive until when we go to facebook and see lots of uploads. We had to inform the mosque committee and they ordered it to stop.

“Last week, we arrested two people and wanted to seize their camera but the crowd prevailed on us to let them go and we had to, when it was becoming a scene. Sometimes, they will tell you that they have the permission of the Emir. The palace will have to do more as some people come with camera drone operated from inside the palace premises. That is outside our purview,” he added.

But a top palace source said the viral photo shoot was that of the son of a prominent politician in the state who is also serving in the government.

According to him, “He approached us that he wanted to use the mosque and we obliged him. There was no free mixing between them at all, I witnessed the incident but being the son of a politician, I suspect the video was edited and doctored to make it look like they embraced and with a soundtrack.

“It was some emirate indigenes in Cairo and Saudi Arabia who first slammed the video, saying that it ridicules the status of Ilorin, famous for religious learning and Islamic jurisprudence, and they called the attention of the chairman of the mosque’s Central Working Committee (CWC), Alhaji Sheu Gafar, to it. He brought it to the attention of the emir who later ordered that nobody should be permitted henceforth even if it involves his children,” the source noted.

The Emir subsequently issued a statement banning “any form of unauthorised pre-wedding video shooting and photographic expedition for whatever purpose in the edifice.”

The Emir’s statement described the pre-wedding video shots recorded at the Mosque as “amorous” and disclaimed the allegation of granting people approval to access the main hall of the mosque. He warned those dropping his name to stop such action forthwith and viewed the video under review with utmost disappointment.

While appreciating the concerns and comments generated by the video, Alhaji Ibrahim Sulu-Gambari said everything worth doing would be done to ensure that a repeat of the incident does not occur.

He added that the ultramodern edifice does not exist for such a practice from anyone or group no matter how highly placed and it was important for all Ilorin patriots and friends to judiciously use the Mosque for the purpose of worship and community development. The monarch warned “that the violation of the directive would be visited with appropriate sanctions to discourage such illicit practice which exposes the mosque and Ilorin Emirate at large to ridicule,” in a statement by the chairman, Central Working Committee and secretary, Board of Trustees, Alhaji Shehu Abdulgafar.

Reacting to the issue, the chairman, Hijrah Organization of Nigeria, Prof Lanre Yusuf Badmus, said “the mosque is a very beautiful edifice but the primary objective is to make it comfortable for the worshipers of Almighty Allah and those who want to learn or memorize the Qur’an. It is not a place for a kind of funfair or using the decorations for the purpose of taking photographs or any mundane activity.”

Badmas, a one-time national secretary of Nigeria Hajj Commission (NAHCON), further observed that “Those who used the opportunity of taking either pro or pre wedding photographs there was because they realized the mosque is seriously underutilized.

“If you visit the first two mosques in Islam in Makkah and Madina, you will discover that they are beehive of Islamic and academic activities. Apart from the Jumaat prayers, only occasional Islamic activities are being held in the Ilorin Jumaat Mosque which should not be.

“We are supposed to encourage the residents of this Islamic community to know the utility of the mosque, especially during Ramadan. It is not too much, from the office of the Chief Imam of Ilorin, to have a coterie of scholars who memorized the Quran lead Tarawih prayer every night throughout the twenty-nine of thirty days of Ramadan. We will pass this advice to Chief Imam who is equally chairman of the Kwara State Council of Ulama.”

Badmas backed the decision of the Emir adding that, “I join the royal father to warn the residents of the community to ensure they dignify the mosque as directed by Allah.”

Similarly, the Executive Director of Muslims’ Initiatives for Rectitude and Rectification (MIREC), Barr Idris Ibrahim Alao, frowned at the alleged restriction of the mosque, describing it as the rallying point and site of learning for Muslims in Ilorin Emirate.

“Since its remodelling 10 years ago, the mosque has become a site of attraction for tourists from different parts of the globe. While this is a welcome development, MIREC is sad to experience silence around the mosque vicinity except on Fridays.”

He said the mosque has always been a home for Islamic learning and recalled a number of programmes and daily prayers that hitherto tool place there.”

But speaking with Daily Trust on Sunday, the chairman of the mosque Central Working Committee (CWC), Alhaji Shehu Gafar, said the committee has suffered frustration in the quest to raise funds to continually sustain its maintenance.

“I won’t agree that the mosque has been restricted and that no activity is going on except Jumaat prayers. In fact, we have widened the religious activities there. The only thing that we don’t do there is the ratibi (five times daily prayers). We now have a modern reference library in the mosque which people have been using with over 40,000 collections. That has never existed.

“Only recently, we invited Islamic scholars and proprietors to introduce the library. But despite the media awareness, the patronage has not been encouraging which only demands registration fee of N1,000 annually and further reduced to N500 for students.

“We have hosted a number of Islamic activities like seminars and conferences and on Fridays, before the Imam starts the khutbah, there is a lecture by the renowned Islamic scholar, Sheikh Yakubu Aliagan, the Seriki Malami of Ilorin.”

Alhaji Shehu said “the former mosque was never opened for the ratibi prayers before it was remodelled.”

Speaking on the cost of maintenance, he said “In the last five years, its weekly maintenance from N1.5m has shot up to N2.2m just for recurrent expenditure. This is excluding salaries, cleaning fee which we contracted to the company cleaning the Abuja National Mosque. Our electricity bill is about N31,000 monthly while the water rate is N20,000 among others. The mosque has no investment that can bring money. We have been living on alms (feesebilillahi) from the blessed ones among us.”

He said the directive by the emir that every ratibi mosque in the Emirate be contributing N1,000 monthly to support its maintenance has not yielded any result.

“We have 1,313 ratibi mosques in Ilorin without going into Moro and some parts of Asa which make up the Emirate. If 300 defaulted, that will give us N1m monthly.  That directive has been in place since April 2 016, which means we could have been grossing N12m yearly. Imagine what could have been realised to date. But since then, we have not made N8m and in fact, we have to stop at a point when we compared it with what we were spending for the awareness. Ilorin people don’t want to take care of their mosque…but Allah knows how to and will surely maintain His House,” he submitted.