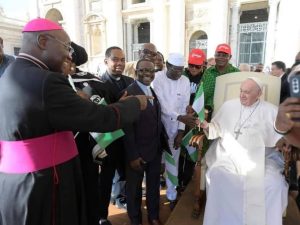 His Holiness, Pope Francis, with Nigerian Pilgrims in Rome

Pope Francis has granted an audience to 112 pilgrims from Nigeria currently in Rome for the 2022 special pilgrimage organised by the Nigerian Christian Pilgrim Commission (NCPC).

The pilgrims were led to the papal audience at the Vatican City by His Grace, Archbishop Ignatius Kaigama, among other high-profile personalities.

A statement issued on Monday in Abuja by Celestine Toruka, NCPC Head of Media and Public Relations, said that the Pontiff received the Nigerian flag from the pilgrims and prayed for peace and progress in Nigeria.

He also prayed for those who lost their lives in the recent flood incidents in Nigeria.

Toruka said that Rev. Yakuba Pam, the Executive Secretary of the commission, described the audience with the Pope as spiritually fulfilling.

He quoted Pam to have commended the good conduct of the pilgrims during the special pilgrimage to Rome in spite of what he described as some “inadequacies”, and the inability of the pilgrims to visit Israel due to operational reasons.

The NCPC boss assured the pilgrims, especially the self-sponsored ones that the commission would come up with a mechanism to accommodate them in the next pilgrimage, the spokesman said.

The PRO added that one of the pilgrims and the President of the Baptist Convention, Rev. Israel Akanji, also described the visit to the Pope as awesome, adding that it would have a special effect on Nigeria and her people.

The spokesman also said that Daramola Bade, the General Secretary of the Christian Association of Nigeria (CAN), who handed the Nigerian flag to the Pope, said it was an unforgettable experience.

“I will never forget this experience in my life, I thank the NCPC for providing this veritable platform to be in the presence of his Holiness,” Bade was quoted as saying in the statement.

Very Rev. Bukola Adeleke, the Special Adviser to the Lagos State Governor on Christian matters, said that the pilgrimage to Rome was fulfilling in view of the many Holy sites visited by the pilgrims in the statement.

Toruka stated that Adeleke said that the pilgrims visited the St. John Basilica, the Basilica of Mary as well as St. Peters Basilica all in the Vatican among other important Holy sites. (NAN)