It is usual for identical twins to do most of their things together and in common, including wearing the same clothes, going to the same… 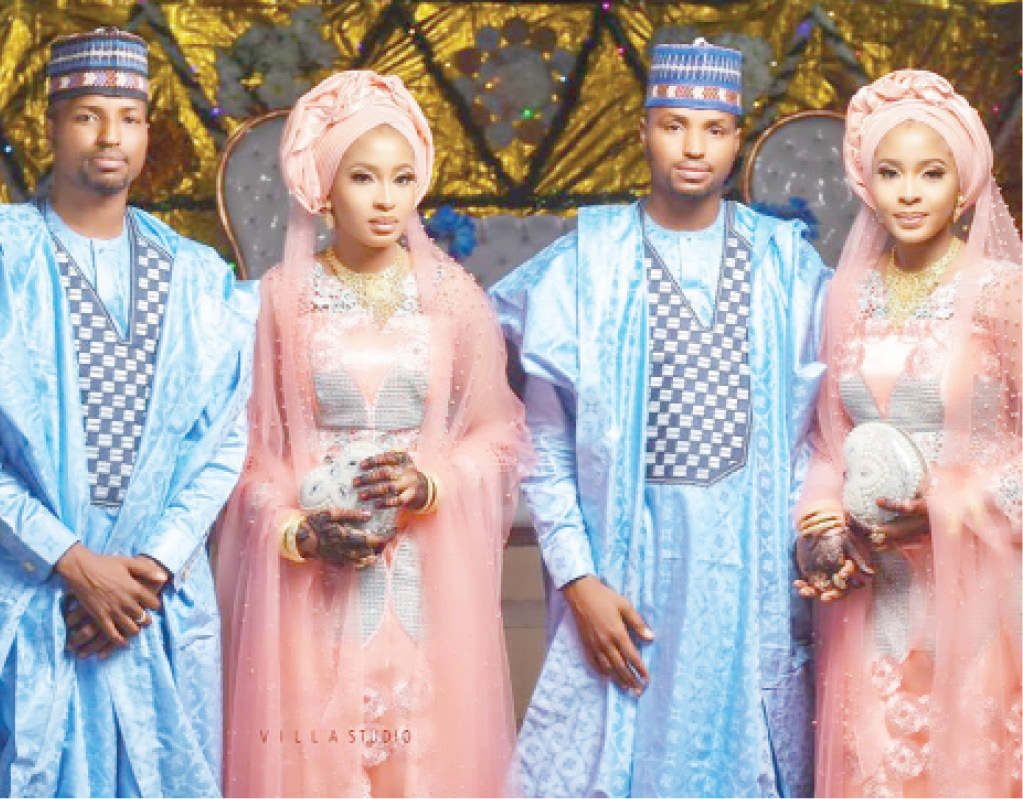 The two sets of twins did not only agree to marry one another, but will also live in the same compound as a way of extending their bond of togetherness.

Contrary to provisions of other cultures, particularly in the southern part of the country, Hausa and Islamic culture gives room for intending couples to marry wives related to one another.

Speaking to Daily Trust on Sunday, one of the prospective grooms Hassan Suleiman said their intention to marry the identical twins was borne out of their quest to extend the bond to their wives who will as well see themselves as one.

According to him, “From birth, we have always been doing things together. We share all we have together, so, we kept praying to have same wives who will share similar principles with us.

“What actually motivated us was for us to sustain that bond of togetherness without either of our wives being jealous of one of us helping the other. So, now, none of them will have problems with us helping ourselves or even our children to come as they are both from same parents also,” said Hassan Indabawa.

Hassan and Hussein who both have Diploma certificates in Public Administration from the Kano State Polytechnic and Kano School of Hygiene respectively, and work with Gwale Local Government Primary Healthcare, said their major prayer is to also give birth to sets of identical twins.

“All our five elder brothers have twins, so our prayer is also to follow suit,” said Hussein Indabawa.

On how they first met, Hassan said the brides were recommended to them because they share many principles in common and were later asked to seek for their hands in marriage.

On their parts, the brides – Hassana and Husseina, who both studied Chemistry/Islamic Studies at the Federal College of Education Kano, said the relationship started as mere friendship before it later graduated to courtship and now they are planning to get married.

Hassana said, “All I can say is this union is nothing but Allah’s will. It initially started as friendship because we took them as just fellow twins, we didn’t even know when courtship started, and now we are getting married.

“We used to go and greet their parents and they also do come around; the relationship gradually became strong before the courtship started.

“During courtship, the four of us usually sit together to discuss. No one discusses with their fiancée separately, we all see ourselves as one,” Hassana said.

On her part, Husseina said since their childhood, people have been praying for them to marry twins like them, adding that the union is an indication of prayers answered.

“Many other twins came to us, but we never accepted any other relationship apart from this.

“I recall a day we went to the market and one seller recommended a set of twins for us, wishing we would marry them, not knowing that we were already engaged to them. He was astonished, and wished us well,” she said.

Hassana and Hussaina both said they have the ambition of becoming medical doctors.

Also speaking to Daily Trust on Sunday, immediate younger sister of the grooms, Fadila Suleiman (Gambo), said though she’s so happy for them, she’d surely miss them as they have always been together.

“Even though I’m a lady, we do things together most of the time. In fact, I sometimes feel we are triplets,” she said.

The wedding ceremony will take place at Al-Karmawy Juma’at Mosque near Yusuf Maitama Sule University Kano by 11am today.