With over 20 million population, Lagos State is the economic hub of Nigeria. It is one of the world’s fastest growing megacities; a place where… 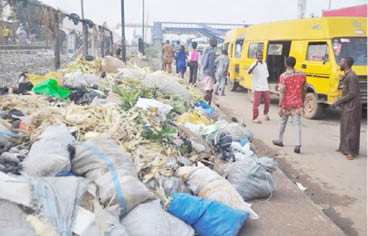 With over 20 million population, Lagos State is the economic hub of Nigeria. It is one of the world’s fastest growing megacities; a place where whoever hustles will make money.

This rapid growth, however, has a downside, which is unimaginable pollution. The state is said to generate over 13,000 metric tonnes of refuse daily.

However, not all of the wastes end at designated dump sites, as some end up in canals, drains and on roads. Some residents pile up waste and wait to offload them into gutters and drains when it rains, thereby leading to blockage and subsequently flooding.

Despite efforts by the state government to keep the environment clean by hiring cleaners to sweep the roads and clean the gutters; some residents compound the situation as they continue to litter the roads and water channels just immediately after they are cleaned.

Aside from pollution from indiscriminate waste disposal; there is also air pollution from dump sites as a result of foul smell that oozes out from such sites at Ojota, Igando, Agege, Sura and Epe. Despite the fetid smell, trading activities take place around these dump sites while motorists, passersby and residents close to the dump sites battle with the stench daily.

Also, noise and fumes from generating sets, vehicles, domestic and industrial machines constitute pollution to the environment and its inhabitants. This has been the daily reality that Lagos residents live with. The health conditions of many residents have completely deteriorated while some have died as a result of the poisonous effects of industrial pollution and hazards of air pollution.

Research has shown that people who reside in noisy and polluted places are more susceptible to contracting terrible diseases and as such are vulnerable to avoidable death.

At the 2007, World Health Organisation (WHO) conference on environmental pollution, it was agreed that noise causes severe mental health problems, sleep deprivation, hearing impairment, high blood pressure, and many other diseases.

The most immediate effect of noise pollution, according to experts is a deterioration of mental health as people who live too close to airports, for instance, will probably be quite nervous because continuous noise can create panic episodes in a person and can even raise frustration levels.

A World Bank publication: “Cost of Pollution in Lagos”, estimates that illness and premature deaths due to ambient air pollution caused losses of $2.1bn in 2018, representing 2.1 per cent of the state’s GDP.

The study further revealed that in 2018, ambient air pollution led to about 11, 200 premature deaths, the highest in West Africa while children under five were the most affected, accounting for 60percent of total deaths as adults suffered from heart disease, lung cancer, and chronic obstructive pulmonary disease.

Based on the study, industrial emissions are the second source of air pollution as industrial and commercial zones like Apapa, Idumota, Ikeja and Odogunyan, where cement, chemicals, furniture, refinery, steel industries are concentrated, have high levels of pollution.

It also revealed that generators supply half of Lagos’ total energy demand and are the third source of air pollution as the poor combustion of the gasoline and oil used to operate the generators pollutes the air and causes huge health damage.

EIU ranked Lagos 171 out of 172 countries in the list of most liveable cities in the world for the first quarter of 2022, according to the latest 2022 Global Liveability Index.

The report made Nigeria’s “best” city the worst in Africa as Damascus (Syria) and Tripoli (Libya) continue to languish at the bottom of the list along with Lagos (Nigeria). EIU, which is a sister organisation to The Economist, ranked 173 cities around the world on a variety of factors, including health care, crime rates, political stability, infrastructure and access to green space. Indicators used for the ranking index are stability, healthcare, culture and environment, education and infrastructure.

Floods, as a result of blocked drains and water channels, which have become a recurring decimal, have led to loss of lives and property in different parts of the state.

An urban planner and environmentalist, Michael Simire, decried all manner of pollution in the state as single-use plastic materials and other solid waste items are indiscriminately disposed of in drainage channels and other unauthorised places, thereby blocking the smooth flow of the channels and causing flood.

“Smoke from tobacco smokers, vehicles and generating sets also cause air pollution. These have an implication for the health of residents who breathe in the smoke and may fall sick because the fumes are in most cases potentially carcinogenic, which can induce the growth of cancerous cells. Noise pollution is caused by noise emitted from vehicles, generating sets, entertainment and worship centres. This can lead to anxiety and ill health,” the expert said.

To manage the situation, Simire suggested the adoption of the use of multiple-use plastic items, urging the Government to consider adopting a policy to limit or ban the use of single-use plastic items. He also stressed the need to encourage and incentivise recycling and reusing of waste plastic materials.

“Waste disposal and management in the state should be improved and overhauled to ensure speedy evacuation of wastes from homes and sites by disposal practitioners. The populace should be briefed and encouraged to sort and separate their waste items at home prior to disposal while industries should be made to install pollution abatement equipment in their operational process in order to reduce the impact of pollutants (solid, liquid or gas) released on the environment.

“Solar energy systems as an alternative source of energy should be publicised and made affordable to discourage use of power generating sets in order to curb air and noise pollution resulting from their use. There is also the need to monitor and regulate the disposal of used oil to avoid them getting to the aquifer and other places that may be harmful to man and the environment. Regulate the operation and location of entertainment and worship to curb noise pollution,” he added.

A public health doctor and chairman, committee on infectious diseases for the Nigerian Medical Association (NMA), Dr Japhet Olugbogi, also stressed the need to phase out the production of non-degradable plastics; suggesting the use of paper bags.

He said, “We can start using paper bags. These paper bags decompose almost immediately when water touches them. These are things that can relief us and take the place of nonrenewable plastics because even plastics are burnt, they generate a lot of chemicals in their fumes, which are not good for human consumption and we find people burn these plastics from time to time, as they believe that by doing that, they are getting rid of the waste.

“To attain a mega city status like Lagos is yearning for, we need to manage waste more efficiently than we are doing right now. If we have over 20 million people in this few square metres compared to other cities in Nigeria, then we should expect to have issues relating to waste because people will definitely produce and generate waste.”

He said there were so many diseases and illnesses that were caused by poor waste management.

He further said, “You will be shocked to know that irresponsible waste management can lead to diseases like malaria, cholera, polio and other diseases that can result from taking something contaminated through the mouth.

“Where we have so much waste being dumped and is not being managed properly, mosquitoes can fester there; and when mosquitoes fester there, it can lead to a higher number of malaria than should be occurring in that area. When you have waste being generated and rain comes and washes them into homes or into the areas where food items are being prepared or assembled, people can get contaminated from this: food items, utensils, and plates can get contaminated from this and a lot of people who live in that environment can come down with terrible diseases like typhoid, diarrhoea, cholera and you would agree with me that from time to time, Lagos has an outbreak of these illnesses and this will not be unconnected to the fact that we do not manage our waste well.”

On air pollution, he said, “Smoke is a veritable tool for respiratory attacks for those who have asthma. When you inhale the air being polluted by generator fumes and smoking vehicles as you find in Lagos, a lot more people will be having respiratory attacks than usual.

The health personnel decried the degradation and blockage of sewages, drainages and canals with plastic wastes; leading to flooding of roads, streets, homes. “This can lead to a lot of traffic and when people are stuck in traffic a lot, they get overworked, stress level increases and they can come down with things like hypertension, depression or stress-related diseases, back ache, and waist ache among others.

He said, “Improper waste management can also lead to rats and rodents infestation. If you have waste festering in your backyard or around your homes, you will have rodents festering around that area because they have a source of food lying around that region.”

He, therefore, asked the government to stop the production of non-degradable plastics like the ones used for soft drinks.

He further said, “There is an overabundance of plastics in Lagos that even after a thousand years, they do not degrade at all. This is huge pollution to the environment. If we keep on at this rate, we are going to have all our sewages blocked with plastics.”