Police and vigilante in Anambra state, have arrested two middle-aged men identified as Chinedu Anama and Uche Okpara in Ozalla-Awada for assaulting officers of the… 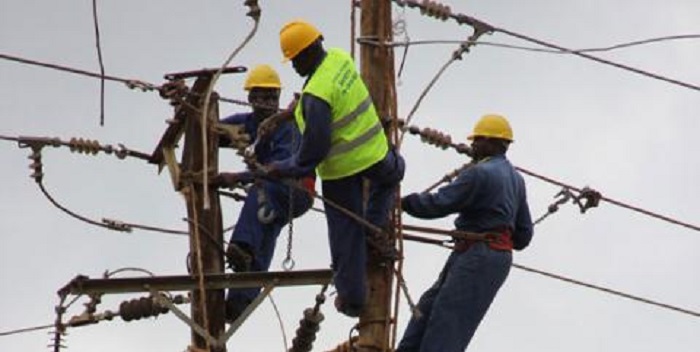 Police and vigilante in Anambra state, have arrested two middle-aged men identified as Chinedu Anama and Uche Okpara in Ozalla-Awada for assaulting officers of the Enugu Electricity Distribution Company PLC (EEDC) while carrying out their legitimate duties.

The officials were assaulted while monitoring disconnected customers at Ozalla Awada in Ogidi, according to a statement by head of EEDC’s corporate communications, Emeka Ezeh.

He said the officers in the process of monitoring discovered an illegal connection at No. 13 Onyekwere Street, Ozalla Obosi, a building with 12 flats, all installed with prepaid meters.

Ezeh who condemned the act said assault of its officials has been one ohf the major challenges the organisation is facing.

Ezeh said that the tenants in the building have tampered with their prepaid meters, which led to the disconnection of the house by the EEDC surveillance team some months ago.

He said the occupants of the building, instead of visiting the EEDC office to resolve the issue, resorted to illegally reconnecting themselves and were enjoying electricity supply before the monitoring team working in that area discovered the illegal connection and disconnected them accordingly.

He also said the team had already left the building to another location when some tenants from the disconnected building accosted them and launched an attack on four of them, leaving one of them, Ugochukwu Chukwunyerem, with severe cuts on his head.

He said the victim was immediately rushed to the hospital for medical attention.

According to him, in the process, two mobile phones belonging to the EEDC officials got lost, while one was damaged and the vehicle used by the team was damaged.

“It is baffling that a customer will engage in meter bypass, illegal connection, or any form of energy theft, and when apprehended, would resist disconnection which is usually the first step in investigating such case and even go as far as inflicting bodily harm on people carrying out their legitimate function.

“The management of EEDC frowns at these actions and will not hesitate in ensuring that the law takes its course.

“We value our staff, and are concerned about their safety, especially when they are carrying out their lawful duties, and we are ever ready to protect them and prosecute anyone or group that assaults them,” he said.

Ezeh also recounted that in August 2019, two officials of EEDC were assaulted at Umunya, under its Ogidi District, while in March this year, one of its officials was attacked by a customer at Umudike, under its Umuahia District Abia state, inflicting a serious machete cut on his hand.

Ezeh said the activities of energy thieves was negatively affecting the revenue of the company and has led to a spiral effect on other aspects of its operations.

He described it as worrisome that some customers who have been metered would resort to meter bypass, an indication that they never had the intention of paying their energy bills.

Ezeh confirmed that the culprits have been handed over to the Police for further investigation and possible prosecution, and expressed optimism that the Management of EEDC will follow through on the matter and ensure they face the full wrath of the law.

“There is no justification for the kind of assault meted on our staff by these suspects, and we hope that this will serve as a deterrent to others,” Ezeh said.