The Ekiti State Police Command has paraded 37 suspects arrested for committing various crimes at different locations within the state. Among them were suspected armed… 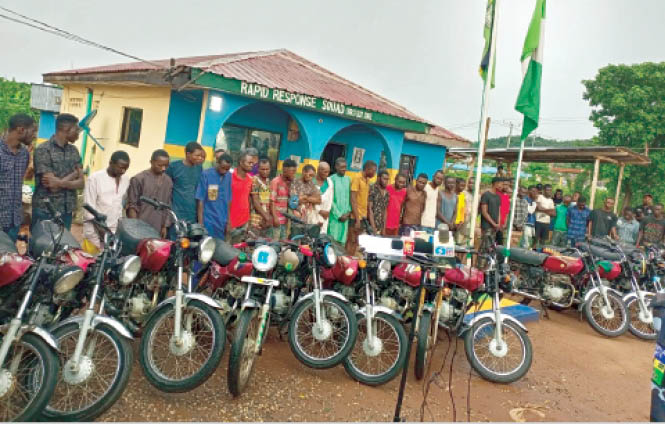 The 37 suspects in Ekiti and recovered motorcycles by police Photo: Raphael Ogbonnaiye

The Ekiti State Police Command has paraded 37 suspects arrested for committing various crimes at different locations within the state.

Among them were suspected armed robbers, cultists, kidnappers, rustlers, receivers of stolen property and some who had been in police wanted list for other crimes.

The command’s spokesman, ASP Sunday Abutu, said 18 were suspected cultists arrested in their hideout in Ikole-Ekiti where they were holding their initiation.

Abutu noted that during interrogation the suspects confessed to be members of Site secret confraternity and participated in the killing of one Ajayi Sunday and Owolabi Ayoola Moses on March 6, in Oye-Ekiti.

He also said the command arrested two kidnappers and armed robbers on March 3, at about 1600 hours when a gang of armed hoodlums numbering about 10 accosted one Sani Mamuda, a Fulani herdsman, who was rearing his cattle along Eruku/Itapaji forest.

He said, “In the process, the hoodlums, at gunpoint, rustled 35 cattle from him while he managed to escape from the scene. Police investigation led to the arrest of the trio of Dairy Adamu, Usman Said and Nura Usman.

Abutu added that 14 motorcycles, locally made short guns, cutlasses and other items were recovered from the suspects.